Donald Trump drew rounds of cheers from several hundred supporters who filed into the Union League of Philadelphia on Wednesday to hear his national security proposals.

"We will be united under one God, saluting one American flag," Trump said. "And, by the way, we love our flag."

Trump offered a 10-point national security plan that called for boosting military arsenals, modernizing missile defense systems and enhancing cyber security. He called for eliminating the defense sequester enacted in 2011, which he said is depleting the Unites States military.

Those proposals particularly impressed Chris Wolfington, of Center City, who said he worries about the safety of his four children and eventual grandchildren. He said Trump's defense proposals use "sound logic, good thinking and good principles."

"I haven't been proud with the Obama administration to say I'm an American," Wolfington said. "When I listen to Donald Trump, I don't always like what he has to say and maybe things come out sideways occasionally. But you cannot argue his principles — protecting our homeland, protecting our kids. I just don't trust Hillary Clinton. So if they're my two options, I'm going to opt for Trump."

Wolfington described Trump as someone who tells the truth, even when it's hard to hear.

"We don't like hearing the truth sometimes because it means that our lives may be inconvenienced," Wolfington said. "We may have to work a little harder or we may have to give something up. But, you know what, in order to get things back on track I'm willing to give up a little."

Trump laid blame for the spread of ISIS, the Syrian refugee crisis and the collapse of Libya on the foreign policies of President Barack Obama and Clinton, who formerly served secretary of state. He declared Clinton as unfit to serve as a commander-in-chief, a criticism his own opponents have lobbed at him.

Trump touted the backing of 88 retired military generals and officials who endorsed his candidacy in a letter released by his campaign on Tuesday. Several of them, including Major Gen. Gary L. Harrell and Brigadier Gen. Remo Butler, were on hand for his Union League address.

"We should work with any country that shares our goal of destroying ISIS and defeating radical, Islamic terrorists," Trump said. "We're going to form new friendships and partnerships based on this mission — and this mission alone."

He called for increasing the active Army to 540,000 troops, boosting Marine Corps. battalions and bolstering the Air Force's fighter aircraft and the Navy's ships and submarines. 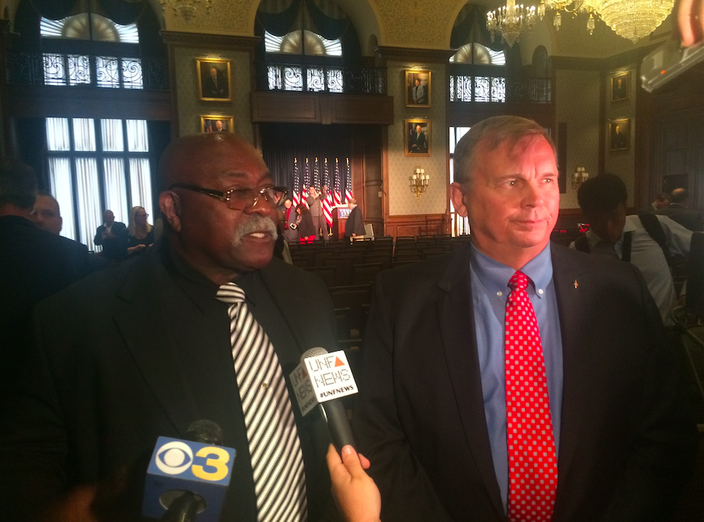 Brigadier Gen. Remo Butler, left, and Major Gen. Gary L. Harrell explain why they are among 88 retired military generals and officers who have endorsed Donald Trump for president.

"We want to see a world where our enemies fear us and our friends respect us," Harrell said after Trump's speech. "That's important.

Harrell said he is impressed with Trump's ability to surround himself with knowledgeable sources — and to listen to them.

"He is a proven leader," Harrell said. "He has proven the ability to be able to assemble a team. Nobody knows the answers to everything. He's shown that he can bring in smart people and he listens to them and gets the job done. Last, but not least, he's not a professional politician."

Trump's speech marked his second visit to Philadelphia within the last seven days. He held a roundtable discussion on Friday with several black leaders.

His Union League address brought out both supporters and detractors who demonstrated along South Broad Street.

One anti-Trump protester hoisted a sign reading "Abe is rolling in his grave!" outside the Union League, a traditionally Republican club on South Broad Street in Center City that formed in 1862 as a patriotic society to support the Union and the policies of President Abraham Lincoln.

Inside, Wolfington heralded Trump as someone who believes in America, but is frustrated by what he sees.