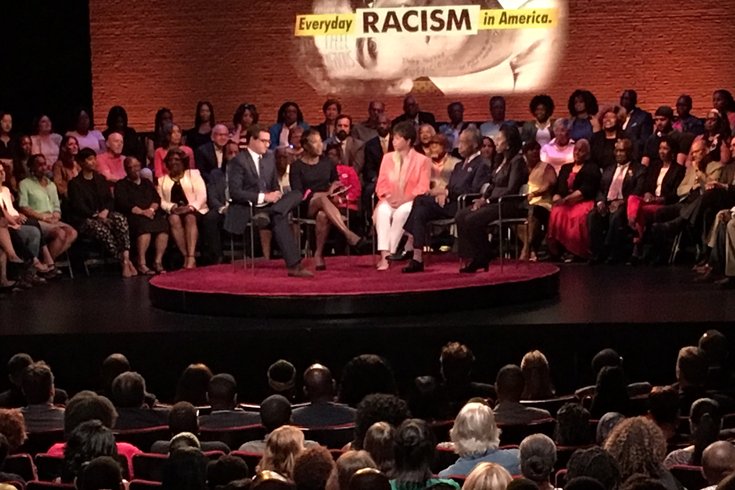 Chris Hayes, Joy Reid, Valerie Jarrett, the Rev. Al Sharpton and Sherrilyn Ifill, at the MSNBC "Everyday Racism" panel at the Prince Theater, on May 29, 2018.

On Tuesday afternoon, the news broke that ABC had cancelled the TV series “Roseanne,” just hours after the series’ creator and star, Roseanne Barr, tweeted grotesque racial insults about former Obama White House staffer Valerie Jarrett. Just hours after that, Jarrett appeared on stage at the Prince Theater in Center City to make her first public comments on the matter.

The occasion was “Everyday Racism in America,” a special MSNBC Town Hall event on the subject of racism and its impact on American life today. The special taped late Tuesday afternoon before airing on the news channel that night.

The event was hosted by MSNBC personalities Chris Hayes, Joy Reid and The Rev. Al Sharpton, and its timing and location were not a coincidence: The special took place at the same time that Starbucks closed all of its more than 8,000 locations nationwide for racial bias training, and the venue was less than a mile from the Starbucks on Spruce Street, where two African-American men were arrested on April 12 And the event, which offered free tickets to anyone who signed up, lined up around the block to completely fill the Center City theater, which was dressed up considerably brighter than how it normally looks.

While her appearance had been scheduled prior to the Roseanne brouhaha, there were gasps, and then applause, from the live audience when Jarrett took the stage, as most in attendance appeared unaware that she would be appearing.

“I think we have to turn it into a teaching moment,” Jarrett said at the event.

“I’m fine. I’m worried about all of the people out there who don’t have a circle of friends or colleagues who come right to their defense. A person who’s walking down the street, minding their own business, and they see someone cling to their purse or try to cross the street. Or every black parent I know who who has a boy who has to sit down and have a conversation, or 'The Talk,’ as we call it – as you say, those ordinary examples of racism that happen every single day.”

Jarrett went on to agree that ABC did the right thing in firing Barr, and to share that Disney CEO Robert Iger had called her personally, prior to the announcement, to apologize, and give her the news that the show was cancelled.

While the evening focused on the Starbucks incident and the company’s response, as well as various other issues of heightened race relations in the Trump era, the "Roseanne" news came up repeatedly.

"People like Roseanne feel empowered," Sharpton said of the climate under the Trump presidency.

"But they got the memo today that they're not so empowered." 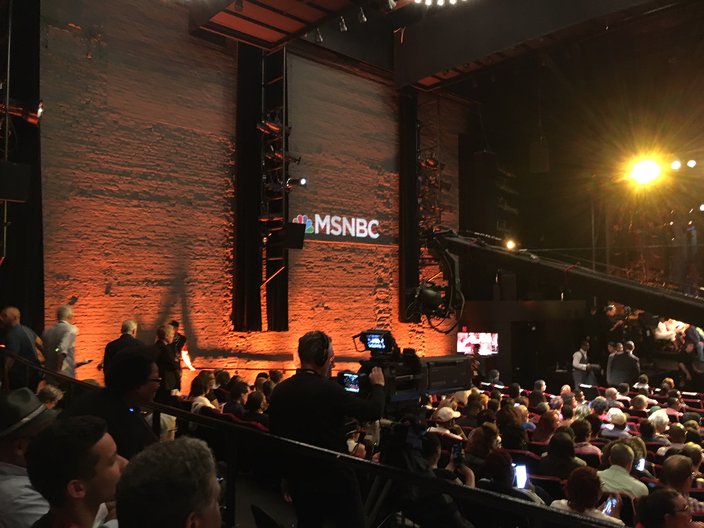 The MSNBC logo displayed on the side of the Prince Theater.

The event also dealt with a series of other high-profile incidents in recent months in which the cops have been called on African-Americans for specious reasons. One of those people, Yale graduate student Lolade Siyonbola was on hand to share the story of how she had the police called on her while napping in her dorm's common area.

Also at the event were two women, Michelle Saahene and Melissa DePino, who videotaped and shared the Center City Starbucks incident.

Another panelist, lawyer Sherrilyn Ifill of the NAACP, talked about the practical, economic effects of racial prejudice.

“People are doing actual work there. This is an actual place where people are getting a benefit,” Ifill added.

“And everyone should have the opportunity to have that benefit…every time a cab passes me by in New York City with a light on, that means I’m now late for a meeting that I need to go to, and I’m a professional who runs an organization…We want to make sure that internally and in the family we talk about the way in which it makes us feel, but I also think we have to quantify that this is dollars and cents. This is real. This is about our ability to function as real people in society. This is about our kids, and what they have access to.”

As for Sharpton, he shared a bit of wisdom related to the importance of bringing attention to causes, that may interest some of his detractors.

“A lot of people say to me, ‘You want to march. You only want publicity. Yea, that’s exactly what I want!” he said. 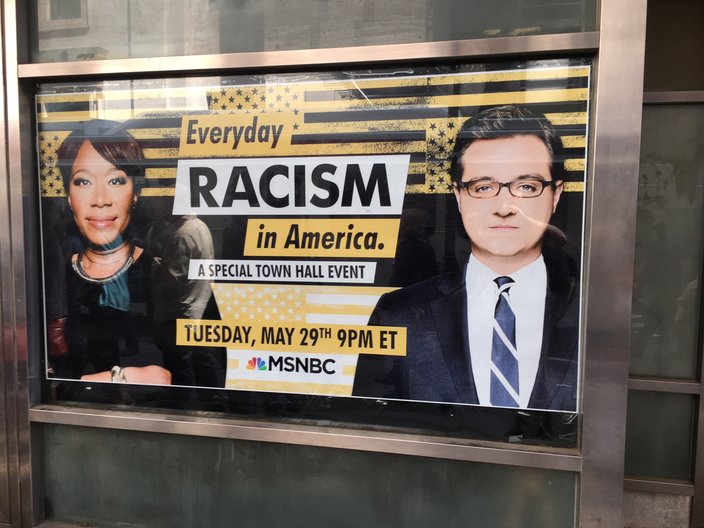 
“The difficulty is, when you have a society, as we do, which has an incredibly high level of incarceration, extreme involvement of police in, frankly, everyday things. And unfortunately, to their detriment, a lot of police have become the first responders for mental health issues, for family disputes…

“You know, it used to be when there was a fight in a schoolyard, this was a disciplinary matter and that turned into a school-to-prison pipeline,” Krasner continued.

“Now, in the same way, just normal disagreements and disputes and curiosities in society have turned into individuals making phone calls because, frankly, they find the race of the person they’re watching to be inherently suspicious. So, it’s a problem, and it does require the participation of everyone not to tap into their biases and to look into what’s really happening.”

People like Roseanne feel empowered...But they got the memo today that they're not so empowered."

Author Tim Wise, on the same panel, went even further.

“White America has been raised to believe that that…the police are always the good guys, and frankly, that black lives matter less than white comfort,” he said.

“Here’s the problem: When a white person calls the police on a person of color over a barbecue in the park, sleeping in a common room at Yale, sitting in a Starbucks, or whatever it is, knowing that Tamir Rice’s life was snuffed because someone called the cops on a 12-year-old boy playing with a toy gun – something white boys do all over the country without fear of being shot – and that’s a national story…When you know that that happens, what you are saying is, ‘my discomfort with you right now is worth more than the potential that your life could be snuffed in 10 minutes. Until that stops, nothing is going to change."

Disreputable as cable news has become as a genre, town halls on important issues have lately begun to represent the medium at its best. CNN’s April event on guns, shortly after the Parkland shooting, was an example, as was a previous MSNBC event, hosted by Hayes, on crime in Chicago. And now there’s this week’s event.

Whether the “Everyday Racism” event will make any difference remains to be seen. But there’s little doubt that some important, necessary conversations were had.