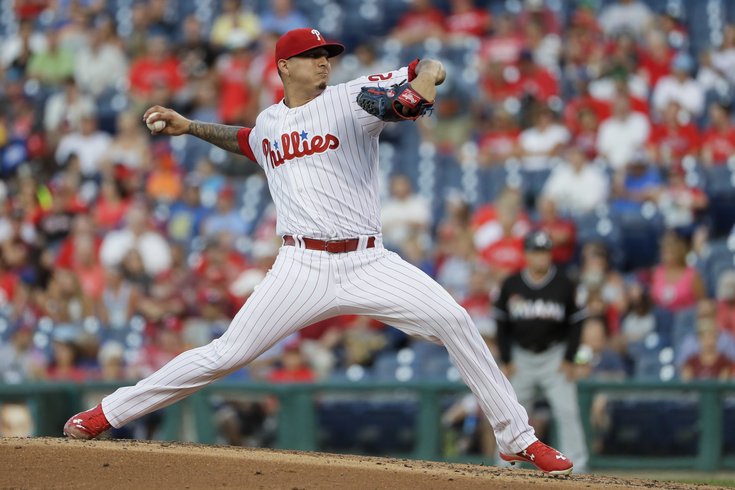 The second place Miami Marlins have plenty of thunder in their lineup, illustrated in part by manager Don Mattingly’s inability to find regular playing time for the guy hitting .345 in 77 games and a half dozen hits away from joining baseball’s 3,000 hit club (Ichiro Suzuki).

With the imposing figure of Giancarlo Stanton in the middle of the order, it’s just the kind of lineup that could easily intimidate a young pitcher who is still trying to feel his way through his first full season in a big league rotation. One slip-up or crisis in confidence by the pitcher and the Fish’s bats can smell the proverbial blood in the water and go on the attack.

Vince Velasquez is certainly not that kind of pitcher.

Not when he was missing his best fastball two weeks ago against the defending World Series champs. And not when guys like Stanton, the worldwide leader in exit velocity, makes himself comfortable in the batter’s box.

Velasquez, making his 23rd big league start on Tuesday night at Citizens Bank Park, fell behind Stanton 2-0 and 3-1 before firing a 97-MPH fastball by the Marlins $325 million man to end the first inning. Velasquez struck out each of the first two batters of the second inning, too.

When his night was over, Velasquez had one blemish on his pitching line, a solo home run from Christian Yelich, but also a number at the front that hasn’t been seen for three months. For the first time since his 16-strikeout shutout in April, Velasquez gave the Phillies at least seven innings.

"I was pretty much refreshed," Velasquez said of his first start in 11 days. "I didn’t hold anything back. I think in (first start out of break), why not go out and give it everything you’ve got? Nothing is hurting, so I don’t see why not."

"He looked good," manager Pete Mackanin said. "Had his velocity. He did a good job keeping us in the game."

The Phillies fireballer and owner of a 3.15 ERA this year (and 1.88 in four starts since returning from the disabled list) had his A-game on Tuesday in South Philly. Velasquez’s teammates, however, didn’t have the same showing.

"Our offense is pretty sluggish," the pitcher said bluntly after his effort was wasted in a 2-1 defeat to the Marlins in 10 innings.

Three innings after Velasquez's impressive night of work was over, David Hernandez allowed a lead-off double to begin the 10th and Daniel Stumpf surrendered a go-ahead hit to Yelich later in the inning.

After winning each of their first five extra-inning games of the season, the Phillies have lost to Miami in extras in back-to-back nights. The Phillies managed all of five hits on Tuesday (one more than they had in 11 innings a night earlier).

The Phils have lost four of five games since returning from the All-Star break. After roaring into the break with the offense finally finding consistency, the Phillies have scored a grand total of three runs in their current three-game losing streak.

It did not leave Mackanin particularly enthused for a second straight night.

"Too many bad at-bats. We’re not grinding out at-bats, and we need to do that," he said. "Too many called their strikes with me in scoring position. That's a pet peeve of mine and we’re going to address that. We need to hit."

After Yelich and Tommy Joseph traded fourth inning home runs, the Phillies had an opportunity to take their first lead in the sixth, when Peter Bourjos led off with a bloop single. Instead, Maikel Franco, Cameron Rupp, and Joseph, the three hitters in the middle of the lineup, piled up consecutive strikeouts.
An inning later, Bourjos came to bat with two outs and the bases loaded. But just like Joseph with the go-ahead runner at third in the sixth, Bourjos struck out looking.
"I’m going to have a meeting with the team and address it," Mackanin said of the two-strike approach. "Sometimes it looks like we’re flailing, getting too anxious, trying to do too much. You have one or two at-bats in the game and then I think guys start guessing … sometimes you have to tip your hat to the pitcher … but you have to maintain your plate discipline. That’s our goal right now, to maintain our plate discipline instead of coming out of it. Ride out at-bats. Two strikes, you have to put the ball in play, especially with runners in scoring position. Things like that."

Despite playing in hitter-friendly Citizens Bank Park, the Phillies have scored the fewest runs at home than any team in baseball in 2016: 153 in 49 games (an average of 2.9 runs per game).

• Maikel Franco said he "felt normal" after a highlight reel-worthy diving catch in the infield ended with his head hitting the Citizens Bank Park infield turf hard in the top of the 10th inning. Miami pinch hitter Don Kelly failed to execute a sacrifice bunt and instead chopped the ball in the air and Franco flew in to snare it for the inning's first out.

Franco was quickly greeted by a member of the Phillies training staff. He remained in the game and was checked out after he returned to the dugout.

• Utility infielder Andres Blanco was announced as the Phillies 2016 recipient of the Heart and Hustle Award, by the Major League Baseball Player Association on Tuesday. The award is bestowed annually to “active players who demonstrate a passion for the game of baseball and best embody the values, spirit, and traditions of the game.”

The award, voted on by a committee of former players, is given to one player from each of MLB’s 30 teams, with an overall winner announced in November. Roy Halladay (2010) was the last Phillies player to win the overall award.

Another catcher, former second round pick and IronPig Andrew Knapp (5) rounds out the top five. The Phillies 2015 first-round pick, Cornelius Randolph, who has been limited to just 22 games this year after battling a muscle injury in his upper back, ranked 7th on BA’s list. While other players (including Mickey Moniak) were listed, there was surprisingly no mention of Dominican slugger Jhailyn Ortiz, the now-17-year-old signed to a $4 million last summer who is hitting .297 with five home runs in 19 games with the Gulf Coast League Phillies this summer.