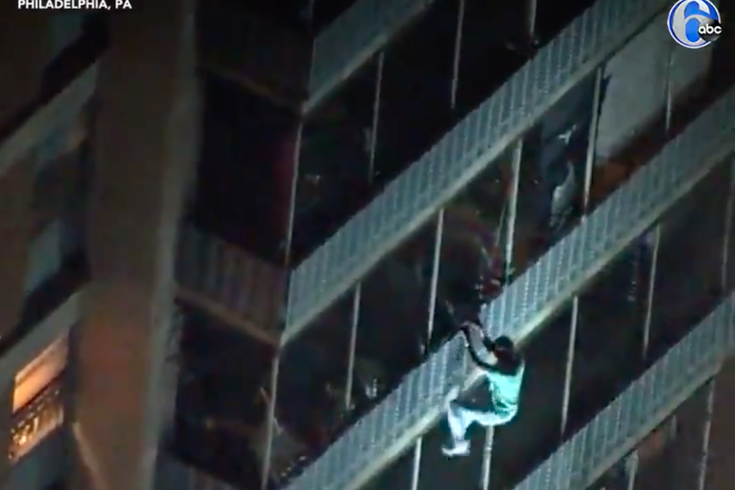 Video from 6ABC shows a man scaling a West Philadelphia apartment building that caught fire on Thursday night that injured four residents and three police. The man made it to the ground safely.

A chilling video shows a man scaling a 19-story residential high-rise in West Philadelphia to escape a fire that broke out on Thursday night.

A trash fire at Holden Towers on the 4400 block of Holden Street started on the first floor around 9:30 p.m. on Thursday and traveled up the trash chute to the building's upper levels, causing flames to spread and heavy smoke to pour into the hallways, 6ABC reported.

MORE NEWS: Penn professor: The United States 'will be better off with more whites and fewer nonwhites'

Emergency responders got the blaze under control around 10:30 p.m. and all residents were able to escape the apartment building. Four residents and three police officers were treated for smoke inhalation and heat exhaustion.

Holden Towers is part of the Philadelphia Housing Authority and houses families and older adults, according to the Inquirer.

Video of one man scaling the side of the high-rise has gone viral on social media. TV news helicopters were able to capture video of the man.

He made it to the ground safely within minutes and has not been identified by Friday morning.

FIRE ESCAPE: Man seen scaling the outside of a 19-story apartment building to flee a blaze in Philadelphia made it to ground level unharmed. https://t.co/cJxWLOIhBy pic.twitter.com/fYKRsGzHjI