Vote: Best Philadelphia team ever bracket Round of 32 — Schmidty region 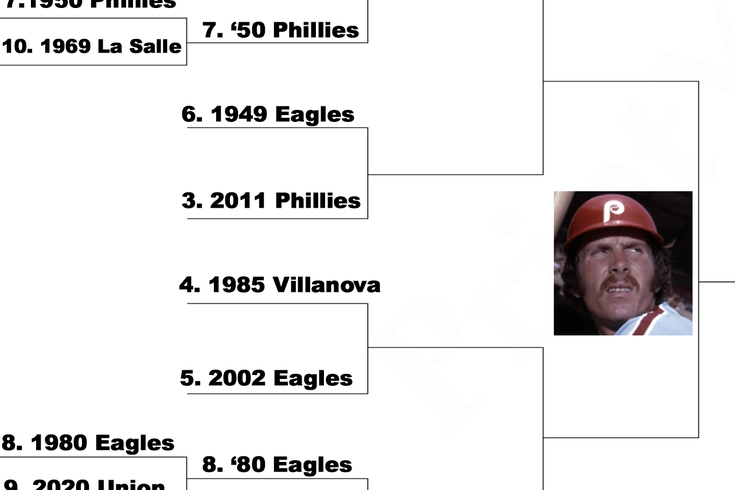 It's impossible to compare teams across eras.

The rules change. The quality of the athletes change due to technology, science, training techniques and so on.

The styles change. The 3-point line has only been around since 1979. The spread offense didn't exist a few decades ago.

But who cares. Let's do it anyway.

In the spirit of March Madness, we compiled a 40-team bracket. Managing sports editor Evan Macy, deputy sports editor Shamus Clancy and staff writer Nick Tricome ranked the 40 teams you see in the bracket below and we took the average of the three seedings to create the seedings we will use for this exercise.

coming this week on @thephillyvoice: pic.twitter.com/unti3yYnG7

How should you vote? Is it for your favorite of the two teams matched up? Which you think is better? Which you think would win a head to head match (if it were possible)? That's entirely up to you.

Today, we'll break down the matchups in our Schmidty Regional in the Round of 32. We previously went through our Dr. J Regional, which you can check out here. Below we'll give you some facts on each team, and some thoughts on what we think of them. And then it's up to you to help us crown the best team in Philadelphia sports history.

Evan says: This is a classic team in Philly lore and while they did not win Super Bowl XV, they are one of three teams to have ever played in the big game from this football-crazy city. They were awful in the big game against the Raiders, but in the week before they demolished the Cowboys in one of the most memorable wins in franchise history. Based on talent alone this team might not make a deep run, but its reputation should get it to the round of 32.

Shamus says: The best third baseman and left-handed pitcher were at their apex in 1980, as Mike Schmidt grabbed his first NL MVP award and Steve Carlton took home his third Cy Young. In the franchise’s 98th season, the Phillies were finally World Champions because of Schmidty, Lefty, Bull, Bowa and Tug.

Nick says: The story of the 1985 Wildcats still sounds too good to be true. Rollie Massimino's group came out of the Southeast region as an eight seed and fought tooth and nail all the way to the title game, where the toughest challenge awaited them last: the defending champion Georgetown, which was basically playing with an NBA starting five. Villanova played a "perfect game" to win it. This team looked at the impossible and said "why not?" No wonder they're still so beloved a near four decades later.

Shamus says: I’ve said that the ’02 Eagles were the best of the Reid era, even more so than the 2004 team that reached the Super Bowl. This Eagles team was fourth in points scored despite having a backup QB start six games and second in points surrendered. This should’ve been the first Eagles team to hoist the Lombardi. Alas, the Buccaneers came to town and put the nail in the Vet’s coffin.

Nick says: The '49 Eagles punished opposing teams on defense, then ran the ball down their throat on offense en route to a second straight championship. The defense ranked No. 1 in yards and points allowed, and had three players (Frank Reagan, Dick Humbert, and Pat McHugh) combine for 20 interceptions. The the run game got the job done on offense, with Steve Van Buren's 1,146 rushing yards and 11 TDs leading the charge. It more than made up for a decent at best passing attack, and pushed the Eagles to an 11-1 record and a championship shutout of the L.A. Rams.

Evan says: This team had such a good pitching staff it is just chilling to think that they didn't make a deeper run. In contrast to the home run bashing rosters earlier in the team's mini dynasty, their 3.02 ERA as a staff has only been bested twice since 2011 (the 2015 Cardinals and last year's Dodgers). But alas, they lost perhaps the most frustrating game of my career as a Philadelphia sports fan, a 1-0 nail biter that ended in Ryan Howard tearing his Achilles. They haven't played a playoff game since.

Nick says: Those that were around to see the '60 Eagles tell stories about how great they were to this day, and to the generations that followed, this team is like legend. The numbers back them up too. These Eagles forced a league-leading 45 turnovers, Norm Van Brocklin threw 24 touchdowns, and Tommy MacDonald hauled in 13 of them, then there was the 60-minute man himself, Chuck Bednarik, giving opponent's nightmares on both sides of the ball. They were tough, they were fast, they were skilled. And they have the honor of being the only team to hand Vince Lombardi a postseason defeat.

Evan says: The Phillies pre 1970s were really a terrible franchise with almost no success whatsoever. This trip to the World Series saw two of the best players in the history of the team, Hall-of-Famers Ashburn and Roberts playing in their prime. They were overmatched by a Yankees squad that had Yogi Berra, Joe DiMaggio, and Whitey Ford. The Phils wouldn't have another title try for 30 years after this.