Large brawl breaks out after eviction in Pennsylvania town 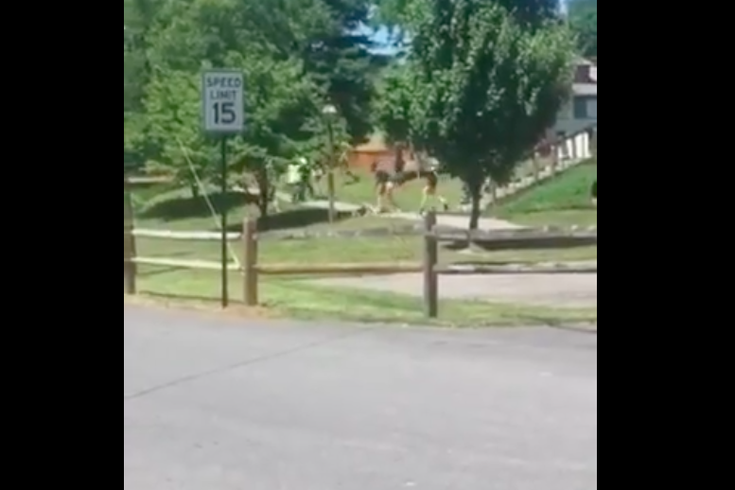 This screenshot is from a video of a fight that broke out in Walnutport, Pennsylvania, on Monday, July 9 after a family was evicted from a home.

A video of a large brawl that broke out after an eviction in a Pennsylvania town has gone viral, with both parties involved accusing the other of being responsible for starting the violence.

The incident occurred on Monday, July 9, when the Northampton County Sheriff's Office showed up at 400 Lehigh St. in Walnutport to evict Jen and Avidan Torrens, along with their 15- and 18-year-old daughters.

According to Sgt. George Volpe, the eviction was obviously painful for the family, but happened without incident.

"We were fine, just the usual, people are shocked that they're getting evicted from the home, but we didn't experience anything. We had no issues," Volpe said.

But then all hell broke loose.

The house is owned by Karen Tolatta, a Northampton County official confirmed. Tolatta showed up during the eviction, as did her son, Andrew Tolatta, with workers from the company he owns, A&J Property Services LLC.

According to a neighbor and the Torrens family, workers from A&J provoked them, taunting them as they moved out and sparking the ensuing violence, with Andrew Toletta allegedly pulling a gun.

Andrew Tolatta's fiancée, Breanna Heffintrayer, in turn, alleged the Torrens family has a history of giving her future mother-in-law issues and getting violent with her, and that they got physical first.

In the video of the fight, posted to Facebook by neighbor Arienna Sabella, it is difficult to see exactly how it started, and who is saying what. What is clear is that people are pushed, punches are thrown and a number of violent threats are made, including:

You can watch the video, which has been viewed more than 21,000 times, below. Warning: The video contains explicit language, homophobic slurs, and violence.

Sabella, who helped the Torrens' get their stuff, said workers with the company were "taunting all of us, calling us names, and even went as far as telling us to slit our wrists."

She said the taunting began when the constables with the Sheriff's office were still there, and continued even after the family, with the help of neighbors, had successfully gotten their stuff off the property.

It was one of the workers who initially pushed the Torrens' 18-year-old daughter, at which point Avidan Torrens stepped in to fight back, according to Sabella.

"So, me and other friends went to get them off and they had hit us as well, and proceeded to pull a gun on all of us saying 'get him on the ground, kill him' and put a gun to minor's heads," Sabella said in a Facebook message.

"I'm not worried about people thinking about me losing my home or why, I'm worried about the use of the gun with all the children there," Jen Torrens said.

Jen Torrens told PhillyVoice both her husband and 18-year-old daughter were both hospitalized. Her husband suffered a broken jaw in the fisticuffs, she said.

Volpe said the sheriff's office was not on scene for the fight. Sgt. Jason Nothstein of the Walnutport Borough Police Department said they responded to the scene, but the fracas had broken up at that point.

He said an investigation is ongoing and no arrests have been made. Police are seeking additional video or witnesses, particularly those not involved in the fight so they can give an unbiased opinion.

Nothstein noted that the video only shows three minutes of the fight, and that much occurred before and after the recording.

The borough clarified in a statement that no borough employees were involved and that it was a "private matter that escalated." Sabella can be heard saying at the end of the video that those involved are borough employees, but made clear in her post that they were A&J employees.

The borough asked anyone with additional information or video to call police at 610-437-5252.

Heffintrayer posted a video response to the incident on A&J's company Facebook page, saying the Torrens family were renting to buy the home but have not made payments for a long time to Karen Tolatta. The 20-day eviction warning was initially given on June 11.

(Jen Torrens disputed this account, saying that it was an agreement to sell, not a rent to buy agreement, and that they had successfully made up some of the late payments.)

Heffintrayer said she doesn't condone how the incident broke out and agrees things could have gone differently, but added that the family has "gotten violent" with her fiancé, his mother and the company's workers "many times" before. She said the fight video doesn't show everything that happened and that it was the Torrens' who initiated the brawl Monday.

In an interview with PhillyVoice, Heffintrayer reiterated those points, claiming that Avidan Torrens came after the company's workers with a bat or a pipe, which is why her fiancé pulled out the gun.

"He went over there to protect his mom because it's not the first time [Avidan Torrens]'s been violent with them," Heffintrayer said. "Oh yeah, they tried to attack her many other times."

Heffintrayer said the incident has led to a flood of negativity from people leaving bad reviews on the company's Facebook page. Tuesday night, she received death threats from a number of phone numbers, which she reported to police.

She said ultimately both sides could have handled the situation better, adding that A&J apologizes and hopes to move on from the incident.