Want to drive your haters insane? Buy their kids this toy for Christmas

Yellies!, the stuffed spiders fueled by the screams of children, are an abomination 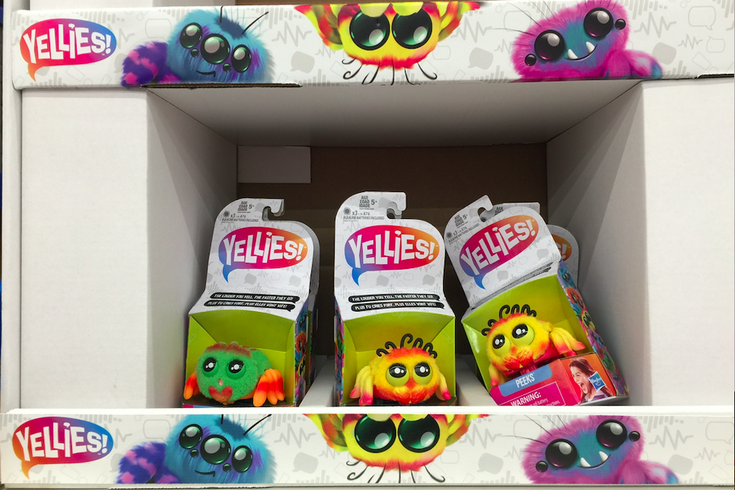 Yellies!, the hot Christmas fad, are toys that move as fast as the children playing with it scream. This is not very good for parental sanity.

If you recognize those monikers, you already know of what I type. If you don’t, may your personal God grace you with a life path that avoids them altogether.

Each of those colorful, spidery critters – as adorable as they may be – fall into the stuffed-toy species called “Yellies!”

Here’s how their creators – the multinational toy and board game company Hasbro – describe them: “Yellies! are the cutest, fuzziest pets that respond to your voice! Each Yellies! pet has its own unique look and personality and is full of fun surprises! … The louder you yell, the faster they go!”

Here’s how most rational people describe them: a horrible, horrible idea that lands the latest fad Christmas-gift gimmick on the list of torture and other acts of cruel, inhuman or degrading treatment or punishment outlawed by the Geneva Conventions.

As a parent myself, I know how rewarding the experience can be. Raising a child is a blessing, as challenging as it can be at times. Why a toy company would try to sow discord in that construct is beyond me.

Let’s take a look at a couple promotional videos being used to normalize these monstrosities:

Yes, the sole reason for Yellies! existence is to get kids screaming unnecessarily.

Sure, it’s the perfect gift to get children of parents you’d like to send to the brink of insanity. After all, incessantly screaming children will drive them and their neighbors, teachers and passersby crazy. (So, Yellies! have that going for them!)

Still, isn’t it the time of year that we should be embracing positivity and making life easier on our fellow women and men?

I believe it was noted philosopher Allen Iverson who once said, “You can hide from the devil, but he’ll always find you.” Well guess what: the devil found us in the form of a cute, furry $14.99 toy.

#WhatTheYell? Yellies! are the new spider toys from Hasbro your kid won’t be able to stop screaming at (available October 1): https://t.co/oooaXVSHa6 @romper pic.twitter.com/OY9fCIIMeB

Yellies! are here. They’re going to multiply like Mogwai who shove food down their gullets after midnight when the kids who DIDN’T get them try and play catch-up with their friends who did.

All we can do now is stock up on ear plugs and get to work putting Hasbro on trial at The Hague.