WATCH: Man breaks into Olney bakery, employees scare him off 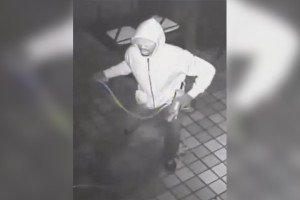 The Philadelphia Police are hoping to identify this man, who broke into a bakery in Olney and was scared off by employees.

The Philadelphia Police are seeking help from the public in locating a man who broke into an Olney Bakery and tried to steal a flat-screen television, until he was scared off by employees.

According to police, in the early morning hours of Tuesday, November 3, at about 5:50 a.m. surveillance cameras captured video of an unknown man gaining entry to the Balle Olimpico Bakery at 4926 North 5th Street after making several attempts to force the door open using his body.

After several failed attempts, as can be seen on the video, the suspect leaves and heads south on 5th Street only to return a short time later with pry tools to force the door open.

Once inside, police said the wanted man tried to take a flat screen TV from the wall and after dragging it to the front door.

Also seen on the video, the suspect then waited on the front steps for several minutes after pulling the TV to the front of the store.

Police said that as he waited there, the wanted man was scared away by the arrival of several employees.

Police said that the suspect then fled the area on foot and was last seen south on 5th Street, all he took were several beverages from the refrigerator.

Police described the individual as a black male, about 20 to 30 years-of-age, with a medium build. At the time of the incident, police said, he was wearing a hooded sweatshirt under a two-tone jacket, and dark colored sneakers.