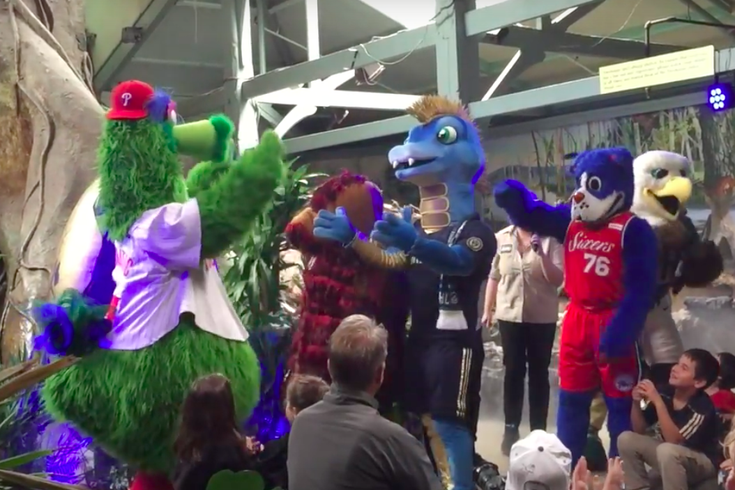 Mascots from several pro teams (and one from college) went to the Philadelphia Zoo on Monday, September 10, 2018 to welcome the Philadelphia Union's Phang the Blue Racer Snake to their exclusive club.

It’s not every day that a new mascot makes its ceremonial debut in the Philadelphia sporting world, but that’s exactly what happened inside the Philadelphia Zoo’s George D. Widener Memorial Treehouse on Monday.

Meet Phang the blue racer snake which will now serve as the Philadelphia Union’s mascot.

In the video below, you’ll see Phang hatch from an egg to the delight of droves of children who headed to the zoo to see what the soccer-related commotion was all about.

As dramatic music played in the background, Phang’s “zookeeper” explained that the hyperactive slitherer’s habitat was discovered in a nest of Philadelphia Union scarves in the “egg section” at an Acme.

Prior to the hatching, the smart money in the room was on the mascot being a snake, what with the creature embedded into the MLS team’s badge and all. The children who figured it was a snake would soon be proven right.

Upon hatching, Phang was welcomed to the community by the city’s other noteworthy mascots: The Phillie Phanatic, Swoop, Franklin and the Saint Joe’s Hawk.

“This is a very special snake here,” the zookeeper said by way of explaining why this reptile had arms and legs. “It started out as just a normal old snake, but through a crazy set of circumstances, it became reborn in this very egg and is ready to cheer on, and play soccer for, the Philadelphia Union.”

“Mascots have always mattered to this city, and they remain relevant right up to today.” --Doug Vosik

Setting aside the (lack of) wisdom of letting a snake mascot take the pitch for a side that’s on the verge of earning a playoff spot, team captain Alejandro Bedoya welcomed Phang to the squad by draping a Union scarf over its neck.

Suffice it to say, the kids in the room were impressed with both the snake’s dance moves and the other mascots prancing around before their very eyes.

From a marketing perspective, the idea for a team mascot had been bandied about at the team’s headquarters in Chester for quite some time now.

Doug Vosik, vice president of marketing for the team, said the process leading to this point involved inviting children to draw their suggestions for mascots and focus groups to tease out which creature would be best, what it would look like and what it should be named.

Upon receiving thousands of suggestions, Vosik turned to the city’s mascot emeritus – David Raymond, aka the original Phillie Phanatic – to whittle down the ideas to a handful from which children could choose their favorite.

Vosik hearkened back to his younger days, when Phanatic giveaways never failed to take him, and other children, out to the ballgames.

He did note, however, that the children involved in the brainstorming process didn't entirely settle in on a snake as the perfect representation.

The other three in the top four finalists were Ben Franklin (which would've been way too close to the Sixers non-Franklin mascot), river monsters (which would've ruled) or bridge trolls (inspired by the proximity and view of the Commodore Barry Bridge to and from Talen Energy Stadium).

“Mascots have always mattered to this city, and they remain relevant right up to today,” he said, noting that there’s a primary benefit to the team unveiling its first-ever mascot this week. “It’s a way to build a relationship with younger fans.”

With no further ado, here’s the official unveiling: