How to watch the final Trump-Biden presidential debate on Thursday

The moderator will be Kristen Welker, a Philadelphia native and White House correspondent for NBC News 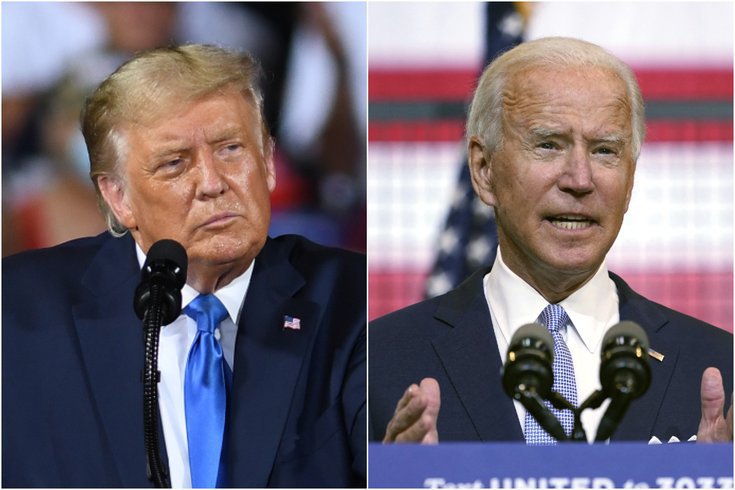 President Donald Trump and Democratic Candidate Joe Biden will face off in the final presidential debate scheduled to take place Thursday, Oct. 22 at 9 p.m. at Belmont University in Nashville, Tennessee.

The final presidential debate between President Donald Trump and Democratic candidate Joe Biden is scheduled for 9 p.m. on Thursday, Oct. 22.

The debate will be held in Nashville, Tennessee, and as of now, Biden and Trump plan attend in-person. Kristen Welker will moderate the debate. Welker, who grew up in Philadelphia, is co-anchor of the "Weekend TODAY" show and is the White House correspondent for NBC News.

RELATED: What you should know about NBC News' Kristen Welker, the Philly native and next presidential debate moderator

The event will run for 90 minutes without commercial interruption. It would've been the third debate of the 2020 presidential election, had the second taken place. After Trump, the Republican candidate, was diagnosed with COVID-19, the Commission on Presidential Debates decided the second debate should be held virtually.

The president announced he would not participate in a virtual event, and then Biden agreed to participate in a town hall at the Constitution Center in Old City with ABC News on Oct. 16, the same night the debate would have taken place. The debate commission eventually canceled the debate, and Trump also participated in his own town hall hosted by NBC News.

On Monday, the Commission on Presidential Debates also announced it would mute both candidates' microphones during portions of Thursday's debate. Both Trump and Biden's microphones will be muted for two minutes each at the start of each topic segment, when each candidate is supposed to give the other uninterrupted time to talk. The Commission said they decided to mute the microphones after the Cleveland debate "to ensure a more orderly discussion of the rules."

Where is the last debate taking place?

On Oct. 12, the president's physician, Dr. Sean P. Conley, said Trump had tested negative for the coronavirus and was no longer a threat to spread the disease. Trump has since resumed holding campaign events.

Broadcast networks like ABC, NBC, CBS and FOX will air the final debate, as will major cable news networks like FOX News, MSNBC and CNN. These options can be viewed using cable, streaming service subscriptions, and affiliated network apps.

TV-streaming apps, such as Apple TV, Roku, Amazon Fire TV, and others will stream it via the internet, as well.

C-SPAN will broadcast the debate live online again, as it did with the first debate at C-SPAN.org and on C-SPAN's YouTube account. An audio-only version of the debate will also be available for streaming on the C-SPAN radio app.

The Trump-Biden debate also can be watch in this embedded video:

Like the first presidential debate's format, this event will be divided into six, 15-minute segments to discuss each topic. The exact questions are picked by the debate moderator and not revealed beforehand.

Chris Wallace, who moderated the first debate, chose the following topics: the Supreme Court, Trump and Biden records, COVID-19, the economy, race and violence in our cities, and the integrity of the election.

During Thursday's town hall, Trump answered questions from voters and moderator Savannah Guthrie of NBC News about the coronavirus, economy, conspiracy theory group QAnon, and white supremacists. The president denied he had failed to denounce white supremacists in the first debate, despite that when he was pressed to do so, he told the hate group the Proud Boys to "stand back and stand by" during the first debate.

He also defended retweeting a conspiracy theory that Osama bin Laden had not been killed by Navy SEALS, leading Gutherie to say the president's social media activity should be held to higher standard than "someone's crazy uncle." Watch the exchange below:

At Biden's town hall in Philadelphia, the former vice president answered questions from voters and host George Stephanopoulos about the U.S. Supreme Court, his 1986 and 1994 crime bills, transgender rights, foreign policy, and fracking. Biden once again said he would not ban fracking.

In one of the most notable moments of the night, Cedric Humphrey, of Harrisburg, asked Biden about when earlier in the campaign the Democratic candidate said, "If you have a problem figuring out whether you're for me or Trump, then you ain't black."

Humphrey asked Biden. "Besides 'You ain't black,' what do you have to say to young black voters who see voting for you as ... further participation in a system that continues to not protect them?"

Biden responded with a quote from John Lewis about voter participation and described policies he would have as president that  would help the Black community and makes him "worthy" of their vote. Watch video of the exchange below.