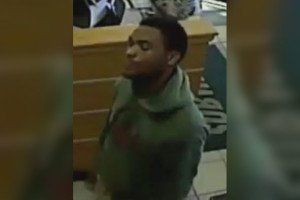 Philadelphia police are seeking help identifying this man, who, they said, is wanted in an assault at a Northern Liberties Subway restaurant.

Philadelphia police are seeking the public's help identifying an individual they say assaulted a 21-year-old man in a Subway restaurant in Northern Liberties on Dec. 15.

According to police, at about 3:22 p.m. that day, the 21-year-old man was at a Subway restaurant at 529 Spring Garden St. with a male friend when an unknown black male approached him from behind and struck him in the face with a closed fist.

Police said the suspect then ran out of the store accompanied by a black female.

The witness, law enforcement officials said, also fled the scene after the incident.

Police said the victim sustained injuries and was transported to Hahnemann Hospital, where he was treated and was listed in stable condition.

Police described the suspect as a black male with black hair who was wearing a gray sweatshirt with red lettering on the chest and tan pants.