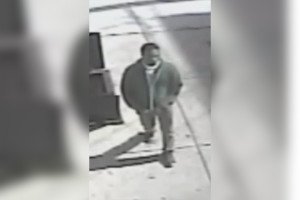 The Philadelphia Police are hoping to determine the identify of this man, who police said, is sought for his suspected involvement in a fatal shooting that occurred in Kensington on Oct. 22.

On Thursday, the Philadelphia Police released surveillance footage that, law enforcement officials said, shows a suspect wandering aimlessly before -- then fleeing the scene after -- a fatal shooting that occurred in October.

Police are hoping to identify the individual believed responsible for the broad daylight murder of James Williams, 25, of the 2800 block of North Fairhill Street.

In the video, a man police described as being about 20 years old with a brown complexion and wearing a dark zipped-up hoodie and sneakers, can be seen pacing the sidewalk in the area of the 500 block of Indiana Avenue on the day of the shooting.

On that block, at 1:08 p.m. on Oct. 22, police responded to a report of a shooting and found Williams suffering from a gunshot wound to the chest.

Williams was taken to Temple University Hospital where he later succumbed to his injuries.

As can be seen in the video, the wanted individual fled east on Indiana Avenue after the shooting.