The city doesn't expect repairs to be complete until April 2022, a full nine months after the initial flooding. Some streets in the neighborhood remain impassible. 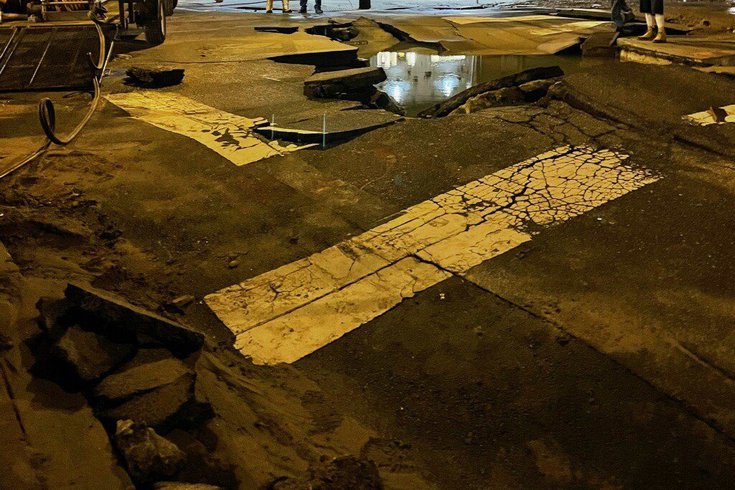 A July water main break in the vicinity of 6th and Bainbridge streets in Queen Village is still not repaired and isn't expected to be until April. This is causing problems for businesses and residents in the neighborhood.

It's been eight months since a water main break near the intersection of 6th and Bainbridge streets left parts of a South Philly neighborhood flooded. But the neighborhood is still waiting for the 130-year-old main to be fixed and city officials don't expect the project to be complete until April.

Some of the streets in Queen Village are still torn up and blocked off by safety barriers.

"It's frustrating."resident Shayne Shands told 6ABC. "With the dog and things like that, just trying to walk the neighborhood. It gets complicated to maneuver because you're going out of a whole section of an area where you live."

But for some businesses in the neighborhood the situation is even more serious.

Redcrest Fried Chicken was getting ready to open its new location in the former Bainbridge Street Barrel House, in addition to the one they have near the corner of 11th Street and East Passyunk Avenue, when the main break struck.

Between 30,000 and 40,000 gallons of water flooded the restaurant's basement, owner Adam Volk told CBS3. He was still finding water in some of the light fixtures down there last month.

“The water actually was completely above the ceiling," he said. "It was over 10 feet and went into the dining room."

Before the flood, Volk and his business partner, Chivonn Anderson, were hoping to turn things around with a new location after they had to close their Brooklyn location down early on in the pandemic.

But they signed a lease for the space in the summer of 2021, three weeks before the main break, and told CBS3 they have been denied coverage by their insurance company.

Anderson told the Inquirer she believes that the city should pass a law mandating that insurance companies pay out in situations like this given that much of Philly's aging infrastructure is in poor shape and breaks often.

The average age of the city's mains is 76-years-old, which is why it's aiming to replace 42 miles of aging pipe per year below Philly's streets before 2026.

Volk and Anderson aren't expecting to get much financial help from the city either, given that payouts take years and there's a $500,000 liability cap.

That's why they've turned to a GoFundMe campaign $50,000 to help them cover what they say has been $300,000 worth of damages. So far, they've raised close to $8,000. They hope to open their 6th and Bainbridge location this spring regardless.

But in a statement sent to 6ABC, a spokesperson for the city said that the timeline is the same as it was when repair plans were first publicly announced.

"The Philadelphia Water Department informed the community and customers immediately following the main break that repairs would take many months," given the scale of the necessary repairs, the statement says.

"When work began in October, we met with neighbors to tell them it would be approximately six months to complete from that date, with work hopefully finishing in April 2022," it says. "It appears all the utility work and road repairs are on track to be finished by the estimated completion date."

Still, the city says it "understand(s) the frustration of those in the community and appreciate(s) their patience."