Wawa, 2SP return with another batch of coffee beers for 2020 holidays 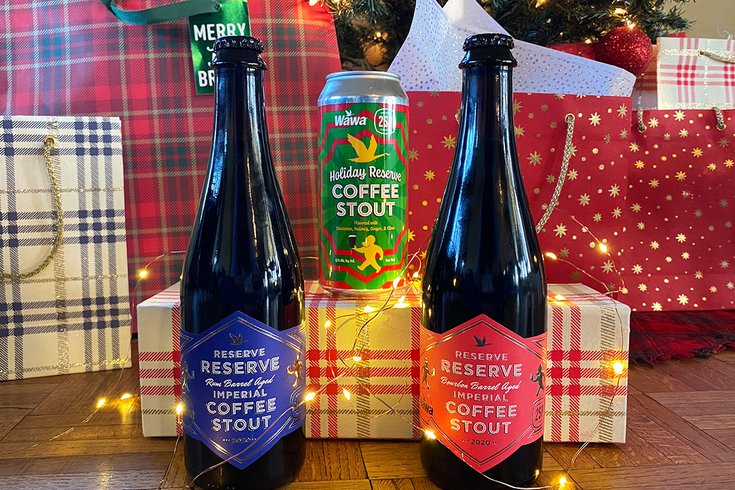 For the third consecutive year, Wawa and Aston-based 2SP Brewing Company have collaborated on a series of coffee beers to help ring in the holiday season.

This year's batch will include two new brews that will be available in Southeastern Pennsylvania, New Jersey, Delaware, and the Eastern Shore area of Maryland.

Here's a full description of each:

Established in 2018 and known for its easy drinking & creamy bodied oatmeal stout, the classic beer has been enhanced with hints of holiday blend flavors of cinnamon, nutmeg, cloves and ginger. $12.99 each

An English Style Imperial Oatmeal Stout aged in Woodford Reserve barrels for 7 months. With the addition of Wawa’s Winter Reserve Coffee this beer is silky smooth with a lot of nuance from the bourbon barrels, including notes of vanilla & chocolate. The sweetness upfront is balanced by the coffee on the back end. $10.99 each

An English Style Imperial Oatmeal Stout aged in Jamaican Rum barrels for 7 months. This big beer will pick up a lot of sweet vanilla, plum, and cane sugar flavors from the rum barrels. Silky smooth and with the addition of Wawa’s Winter Reserve Coffee, balance out the sweetness from the rum flavors. Exclusively available at Wawa Stores and 2SP Brewing Company only. $10.99 each

All three beers will begin hitting select Wawa shelves on Friday, Nov. 20, and will also be available starting Saturday at 2SP Brewing Company, located at 120 Concord Road, Units 101-103, in Aston. Wider availability will begin next week.

The brewers explain the new offerings in the video below.

Wawa will be holding a virtual tapping and tasting event Friday on Facebook Live.

Cheers to another @2spbrewing collab 🍻☕ We’re bringing back one of our favorite beers and introducing a brand new recipes! Join us for a Facebook Live firkin tapping and tasting on Friday 11/20 on Facebook. RSVP here: https://t.co/1JV8O5b3Wm pic.twitter.com/ItL7z08X5o

“It’s our third year partnering with our friends and neighbors at 2SP Brewing Company and we couldn’t be more excited to provide our hometown with these seasonally-inspired beers,” said Mike Sherlock, Wawa's chief product marketing officer. “Although we can’t celebrate in person, we hope these beers bring our community together and provide enjoyment over the holiday season.”