Medical marijuana for pets? Newest user has four legs and a tail 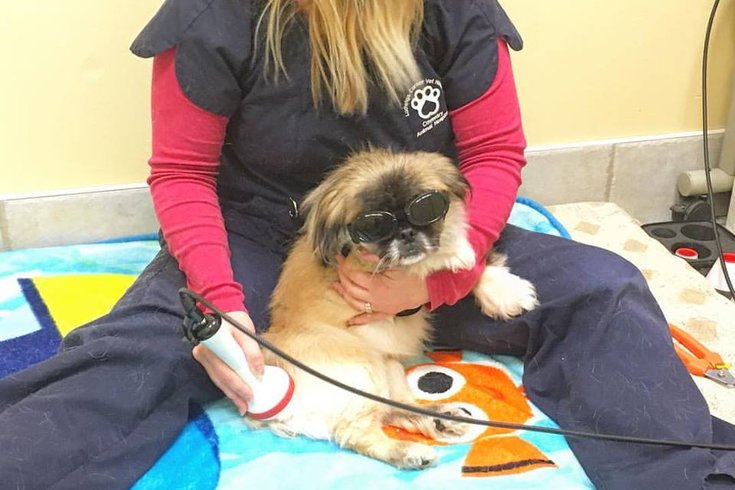 Alvin getting his laser treatment. He needs to go back to the vet this week for additional medication for seizures.

Bobby Jo Bonser and her partner have been fostering a Pekingese rescue named Alvin for the past month in their West Chester home. After noticing that the little dog was dragging his back legs when he walks, they wanted answers.

The vet thinks Alvin may have had a traumatic back injury when he was young.

They suggested laser treatments, which Alvin now gets twice a week, Bonser said.

“We have some medication for pain management,” she says, but neither Bonser nor the vet seems to think the dog is in any pain at present. Alvin also receives Reiki massages to help build up his strength.

With any luck, the treatments and massages will help little Alvin heal before he finds a forever home. But as someone who works with a lot of pets with unique health problems, Bonser’s open to medical marijuana as a treatment option.

“Even being in recovery myself,” she says, “I believe in the benefits.”

“They [pet parents] are tired of their four-legged friends having adverse effects from other therapies, therapies not working to provide an improved quality of life, or feeling helpless during terminal illnesses." — Sarah Brandon

And she’s not alone.

With almost half the states in the U.S. giving medical marijuana legalization the green light (and with recreational use OK'd in places like Colorado and Washington D.C.), the next big question seems to be whether pets, like humans, could benefit from the medicinal qualities of the plant-based drug.

Nevada was about to be the first state in the nation to pass a bill allowing medical marijuana for pets with chronic disease – until it was defeated in legislature. And while the American Veterinary Medical Association has not taken an official stance on the issue, some pet parents who have found little to no relief from more traditionally accepted pharmaceuticals are pushing for alternatives in what feels like the Wild West of veterinary medicine.

There are quite a few companies (mostly based in the Pacific Northwest and California) experimenting with weed-based edibles to help treat pets, like Canna Companion in Mill Creek, Washington. Their digestible hemp-based capsules are legal as over-the-counter pet supplements in all states, though they have not been FDA-approved or regulated.

As part of a more alternative approach to holistic care for pets, researchers have worked to remove chemicals that would cause highs in animals. It’s similar to the way in which cannabinoids are produced to treat seizures and other medical conditions in children – one gets the medicinal effect of the drug without the side effects.

“These compounds are not considered drugs,” explains Brandon. “We mimic the natural hemp plant.”

Pet parents typically look to medical marijuana products for their pets after having to face severe conditions that have been unresponsive to pharmaceuticals and that tend to fall into a few common categories: inflammatory, pain, neurological or anxiety.

“They are tired of their four-legged friends having adverse effects from other therapies,” says Brandon, “therapies not working to provide an improved quality of life, or feeling helpless during terminal illnesses. They realize human children are responding well, having improved qualities of life and less adverse effects from other therapies and wonder if their dog or cat would respond in kind.”

Brandon spends a lot of time counseling pet owners on the most appropriate expectations based on a pet’s diagnosis and focuses more on quality of life than cures.

“More often than not,” she says, “we are able to help their pet feel better when traditional therapies have not done [so].”

Best-case scenarios could mean relieving a dog’s chronic pain or a cat’s seizures or inducing an animal to eat more during cancer treatments without side effects commonly caused by pharmaceuticals.

“The unfortunate reality is most of our customers find little hope in traditional pharmaceuticals and, like many pet owners, would do anything to make sure their furry companions aren’t suffering.” — Jess Cosca

Unfortunately, there’s little data surrounding the benefits of cannabis use in animals. Most studies usually deal with toxicity, or what happens when pets accidentally ingest the drug. There is very little evidence of its effectiveness outside patient trials conducted by the companies themselves.

A call to the Ryan Veterinary Hospital at the University of Pennsylvania yielded very little in terms of data about how marijuana could impact pet health for the better. Most of the treatments being explored at this internationally known research and teaching facility have more to do with accidental overdose, a very clear and present danger for furry friends as more people have access to the drug in their own homes.

Vets also have very little wiggle room when it comes to prescribing medical marijuana in most states, including in Pennsylvania and New Jersey. There are also notable differences between the marijuana a human may use and a product that is created specifically for an animal, particularly when it comes to delivery and dosage. A pot brownie that a human eats, for example, is not only dangerous for a pet because of the cannabis, but it’s also toxic because of the chocolate. Pet owners really need to do their homework and consult with their vets before giving any supplement to a pet.

How does it work?

One of these states is California, where VETCBD has developed a medical-grade cannabis product for pets that’s administered using a dropper. The cannabis extract, which is non-psychoactive, is being used to treat pets with a range of ailments, including cancer, seizures, pain and anxiety. And while the product isn’t currently available in our region, that could change when Pennsylvania’s medical marijuana law comes into play.

“Animals can benefit from the medicinal aspects of marijuana in the same way that people can,” says Kate Scott, a veterinary nurse at VETCBD in Orange County. “Pets have used VETCBD for seizure control, pain, anxiety, arthritis, nausea and loss of appetite.”

The tincture, which is sold exclusively in dispensaries throughout the state, is specific to each patient depending on symptoms and weight – it can be dropped into food or directly into an animal’s mouth. The ingredients come from the same batches produced for humans in the company’s backyard. 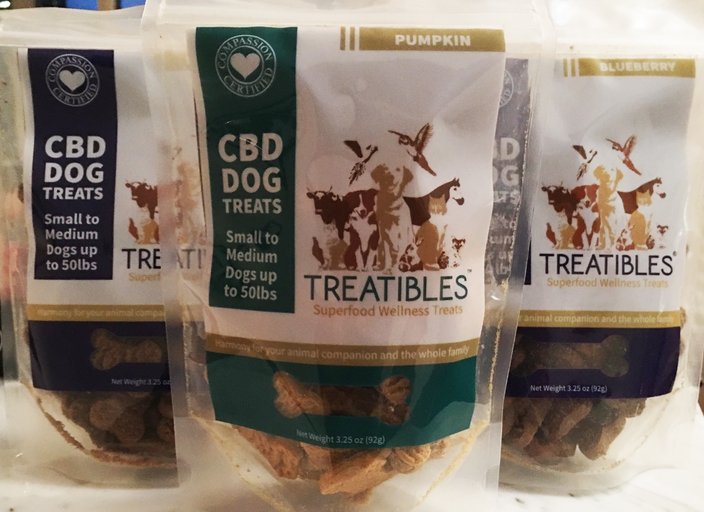 Treatibles come in a variety of sizes and flavors for your pets.

“I think it’s important to point out that we do not encourage people to give canines or any other animals cannabis,” says Cosca, who is careful to make a few distinctions about why products for pets are radically different from the medical marijuana prescribed to people. “All of the CBD [cannabidiol, a non-psychoactive ingredient in hemp and cannabis] used in our Treatibles products is hemp-derived,” she explains. “We do this because we’ve found pets respond better when there’s little to no THC in the products.”


Some of the most common ailments owners have questions about are joint pain, inflammation, separation anxiety, seizures and palliative care.

“While a human suffering from cancer may be able to ingest 1,000 milligrams of THC,” Cosca says, “a dog would respond negatively to even low doses of THC.”

The Treatibles being sold online and at select retailers (more than 50,000 bags so far) are made from medical-grade hemp with a low dose of THC (0.3 percent, to be exact). Each bag has clear dosage instructions on the back, dependent upon the weight of the animal.

“We’ve heard from thousands of customers who have used our products on their animals, everything from dogs to lizards to skunks, and found no adverse side effects,” says Cosca. “The unfortunate reality is most of our customers find little hope in traditional pharmaceuticals and, like many pet owners, would do anything to make sure their furry companions aren’t suffering.” 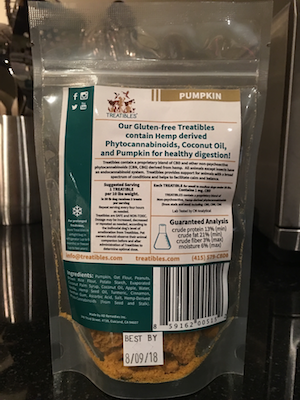 The ingredients and suggested usage for Treatibles.

In some cases, dogs with severe epilepsy go from taking phenobarbital, potassium bromide and Valium to pre-emptively managing seizures with medical marijuana and hemp-based edibles. A 15-year-old Lab mix named Gypsy who has severe arthritis due to a metal implant in her hip is one of Cosca’s favorite success stories.

“She couldn’t walk or jump without yelping in pain,” she says, “and refused to take her prescribed tramadol.”

Once her owners started her on edibles, she began running more and yelping less. She was even fetching tennis balls again – something that hadn’t happened in years.

“More and more people are learning about the medical benefits of marijuana for themselves and loved ones,” Scott says. “Our pets are living longer and fuller lives now, and with age, comes certain ailments. Our goal is to bring comfort, happiness and freedom to pets and their owners.”

What are the dangers?

Tina Wismer, medical director of the ASPCA Animal Poison Control Center in Philly, says that because the nature of marijuana has changed during the past decade with an increased interest in edibles, so has the risk to pets.

“Edibles (cookies, brownies, etc.) and other concentrates, like wax and shatter, are becoming more common today,” she warns. “These products have high levels of THC. Dogs and cats will readily ingest marijuana and become intoxicated.”

“Animals that get into edibles or concentrates may have seizures or become comatose,” Wismer says. “Clinical signs can be seen as soon as 30 minutes after oral ingestion and may last up to 72 hours [much longer than when people smoke it].”

Because this burgeoning medical marijuana industry for pets is self-regulating, there are some red flags that pet owners should be aware of, like how products that claim to be free of solvents, like ethanol or butane, may not be. Butane, for one, is very dangerous to dogs and cats – and yet it can be found in some of the most popular products on the market.

“Nothing is harm-free,” explains Brandon, “which is why we list adverse effects on our website and have veterinary professionals [students under our tutelage, nurses and doctors] available to discuss individual cases or specific concerns anytime.”

Some side effects to watch out for: sedation, temporary wobbly gait, gastrointestinal upset and red or itchy skin. Most are temporary, Brandon says, but it’s important to monitor any pet that’s taking a supplement for allergic reactions that are lasting. There are records of pets that have actually died after ingesting marijuana-laced foods.

In a recent survey of U.S. veterinarians conducted by Pets Best Pet Health Insurance, the third-most common toxin for which veterinarians treat dogs is marijuana (behind chocolate and rat poison). Just because a drug responds well in humans does not necessarily mean the same will be true for pets. There are many substances that are great for people but not pets – like grapes, avocados and garlic.

“Unfortunately, we don’t have any idea what the appropriate dose for dogs [or cats] is,” Wismer says. “We have had animals that ingest these cannabidiol products and still develop signs like animals that get into THC. It is unknown if this is what happens in an overdose, or since these products are not regulated, what is really in them. More true research, not anecdotal evidence, is needed.”

What we already do know is that cannabinoid-based drugs have been used for quite some time in the U.S. The commonly prescribed drug Nabilone is a synthetic cannabinoid that’s used to treat everything from nausea and vomiting to chronic pain.

“We expect and hope that in the near future,” says Scott, “laws change such that we can help pets and their owners across the country.”

The question is whether there will be sufficient research showing real benefits to pets beyond company research. UPenn is expected to conduct research in the coming year, but don’t expect to roll Fido a proverbial doobie anytime soon.