Week 7 NFL picks: Rounding up the experts' predictions for Eagles-Panthers 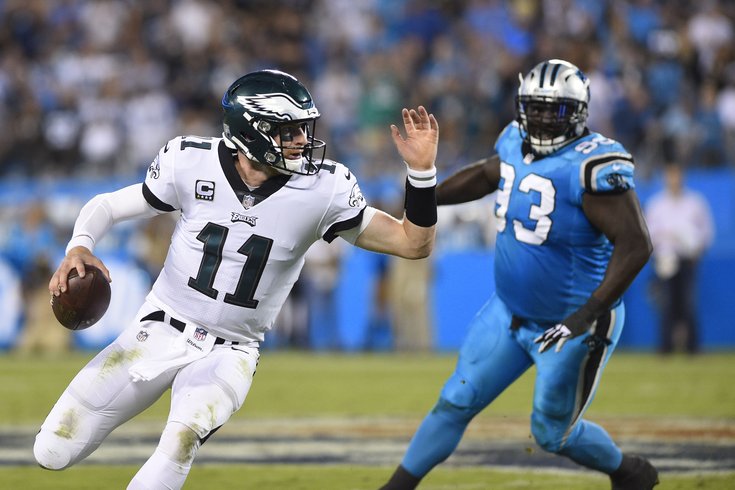 Last season, the Eagles went down to Carolina on a Thursday night in October and upset the then 4-1 Panthers to improve to 5-1 on the season. This time around, however, both teams already have multiple losses, and the matchup comes to Philadelphia as Birds look to go back over .500 on the season.

And on Sunday, they'll square off in a game that could have major postseason implications, if not in terms of who gets in, at least in terms of seeding — and we all saw how important that home-field advantage was for the Birds during the run up to the Super Bowl.

The Eagles have had Cam Newton's number throughout his career, going 2-2 against the Panthers with him at quarterback. Sure, the wins may not be there, and he's recorded 10 touchdowns (six passing and four rushing) and thrown for over 1,000 yards in those four games, but the Eagles defense has also sacked him 14 times, intercepted him nine times and forced him into a pair of fumbles. Moreover, they've held him to a 69.4 passer rating, his worst against any NFL team.

We've broken down the injuries, pointed out the key matchups to watch and offered our own predictions for this one. Now, as we do every Friday, it's time to take a look around the nation to see how the various experts, both local and national, think Sunday's matchup is going to play out.

•  PhillyVoice staff: All five of us picked the Eagles to come away with a win on Sunday. Here's what Kyle Neubeck, who predicted a 27-20 final score, had to say:

The Panthers have not been a good road team this season. All three of their wins came in the comfort of their own stadium, and their losses (at Atlanta in Week 2, at Washington last week) did not exactly come against a pair of juggernauts. So the Eagles don’t exactly have anything to fear with Carolina coming to town.

The Panthers did get a boost with the return of Greg Olson last week, but the Eagles have been particularly strong covering tight ends early this season. They’ve allowed the least receptions to the position (19) of any team in the league, and though that may be a product of teams picking on their shaky outside coverage, Carolina doesn’t have many weapons to punish them there. One matchup to watch — how they deal with Christian McCaffery catching passes out of the backfield.

Health is the major concern for the Birds going into Sunday. Maligned though he may be, it would be tough to lose Jalen Mills altogether, and both he and Lane Johnson were limited participants in practice Thursday. The availability sheet will loom large this week.

With the home crowd behind them, I think the Eagles ultimately get this done.

•  ESPN staff: All 10 of their national experts are picking the Eagles to beat the Panthers on Sunday.

The Eagles own the No. 2 rushing defense in the NFL (79.8 yards per game), which will come in handy against a Carolina squad that averages five yards per carry. Carson Wentz is looking like his old self, and the swagger is back on offense. It should be a good day at the office for the Eagles, who have won 13 of their past 15 home games.

Philadelphia's secondary is banged up, but the Panthers haven't taken advantage of any secondary with deep passes. They have just two receptions for 20-plus yards, a league low. The Eagles are second against the run defensively, so look for them to put pressure on Cam Newton to beat the Panthers. Newton threw three interceptions in a loss to the Eagles last year, and that was at home. This one is on the road, and Philadelphia is coming off arguably its best game yet.

Going with the Eagles at home in what could be an impactful game come tiebreaker time in late December. If the Panthers are to avoid falling to an NFC East team for the second week in a row (it would be a third, if not for Graham Gano's quads), getting back to Norv Turner basics is the ticket. Namely, Carolina must help Christian McCaffrey create, especially in the running game. The beauty of employing Cam Newton is deploying the mammoth quarterback on the ground, including play fakes. It forces the defense to play 11-on-11, unlike, say, Saquon Barkley with Eli Manning. Carolina only rushed for 81 yards against the Redskins, while McCaffrey posted a lowly 20 yards on eight carries. Keep (start?) pounding, Panthers. Otherwise, the Eagles have both the offensive (especially passing) and home-field advantage.

•  CBSSports.com staff: Six of their eight experts are predicting an Eagles' victory over the Panthers, including Pete Prisco, who correctly picked an Eagles' loss in Week 4.

The Panthers are playing consecutive road games outside the division, which is tough to do. The Eagles seemed like they got back on track against the Giants, looking like a Super Bowl contender again. I think that will carry over here. Eagles take it. Pick: Eagles 27, Panthers 16

•  OddsShark: Their computer models have been much better than any human "expert" I've seen picking Eagles games this season. And against the Panthers, they're predicting the Eagles win in a blowout.

Philly is finding its groove, and the Panthers quickly could be falling out of the race for the NFC South crown.

Carson Wentz is shaking off the rust and should have his best game of the season.

Have the Philadelphia Eagles recovered from their early-season Super Bowl hangover?

It appears so, and it helps that quarterback Carson Wentz and top wide receiver Alshon Jeffery have also recovered from injuries that kept them out for large portions of September.

Those two were were clicking as Jeffery caught eight of Wentz's 36 pass attempts and two of his three touchdown throws in a blowout road victory over the desperate New York Giants in Week 6.

•  SBNation staff: Six of their seven experts are taking the Eagles over the Panthers.

•  Philly.com staff: I've hit my article limit for the month, but you can get their Eagles-Panthers predictions right here.

•  Bleeding Green Nation staff: All seven of their writers are picking the Birds to improve to 4-3 this weekend.

•  NJ.com staff: All seven writers see an Eagles' victory over the Panthers, including Birds beat writer Zack Rosenblatt, who predicts a 28-24 win for Philly

The Eagles victory over the Panthers last season was an important touchstone on their run to clinching the NFC and eventually winning the Super Bowl. This game could be similarly impactful, especially with a tough stretch of games coming up, including matchups against the Jaguars and Saints. With Cam Newton around, the Panthers are always a difficult team to stop, but the Eagles get the edge again (at home this time) as Carson Wentz continues to establish himself as the MVP-level player of a year ago.

•  Philly Influencer, staff: It's unanimous. All seven of their writers are picking the Eagles over the Panthers on Sunday, including PhillyVoice contributor Nick Piccone, who sees a 10-point win.

I’m still not sold on this team, and it’s hard for me to separate what this group did last season and assuming they’d be able to just duplicate it this season. I know that’s not how it works. That’s not how any of this works. But I do think the big win against the Giants bodes well for the immediate future, and a home win is sorely needed after the terrible Vikings loss.

Maybe they pull away late, but a 10-point win cements the Eagles as still being the best team in the NFC East, and among the top in the conference.

The Panthers did not do themselves proud last week in Washington, especially after the dramatic win over the Giants, but the biggest culprit by far is the most fixable: the three turnovers, two by rookie D.J. Moore. Without that, and with Cam Newton being what he was in the second half, they could keep the Eagles from picking up any momentum from the rout of the (yes, again) Giants. It may really just be a matter of seeing what the Eagles look like in November and December.

The Panthers are 3-0 at home and 0-2 on the road. Cam Newton has been steady, but the defense seems to struggle away from Charlotte, especially against the run. Carolina also will have trouble covering the combination of Zach Ertz and Alshon Jeffery, as Carson Wentz is now looking like the 2017 version of himself. Both Philadelphia lines will win their battles, and the reining Super Bowl champs will keep rolling.