What to do when children bring deep Santa questions home 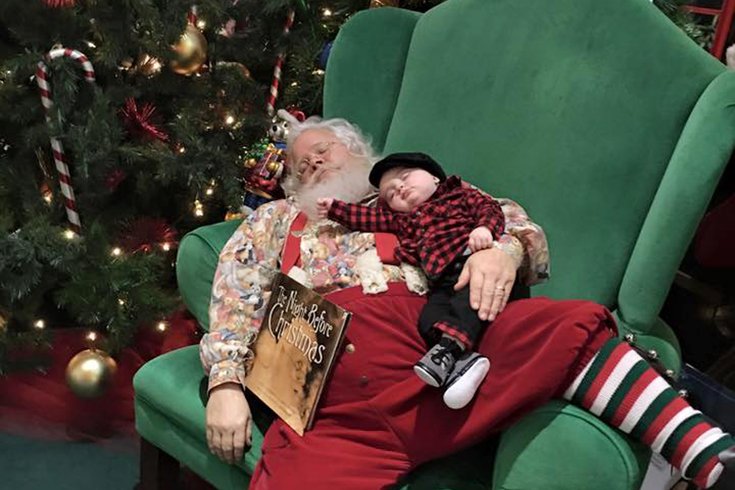 In this Nov. 25, 2015 photo provided by Donnie Walters, Walters' son Zeke snuggles up on Santa's lap during a visit to a shopping mall in Evansville, Ind. Walters said his son fell asleep waiting in line and when they go to Santa, he asked him not to wake the boy. Santa leaned back in the big green chair with Zeke and a copy of The Night Before Christmas posing for a photo that makes it look like the pair fell asleep.

When you’re the parent of a young child, this is the time of the year when you find yourself navigating a fine line between the wonders of youthful minds and bending the truth a wee bit to act as if a fictional character is, in fact, real.

Yes, we’re talking about Santa Claus, the fellow who gets credit for purchases made by real-life parents.

Moreso than that, though, it’s a dicey proposition to keep that ruse up, leaving yourself to wonder when your offspring will inevitably bring the dreaded, “Is Santa real?” question home one day.

“You know your child. Is the truth going to make them upset, or make them feel good? You have to play that one as you see it, and the only person who knows that is you, since you know your child best.” – Deena Weinberg, Ph.D., senior fellow in Penn's Department of Psychology

There’s no guidebook for that day. You’re left to figure it out on your own.

What do you do when your child hears at school that Santa isn’t real and you want him or her to believe? Should you be upfront about it? And if your child knows the cold, dark truths, what parently advice should you deliver if he or she wants to break the news to other kids?

The topic itself – as parenting advice’s wont to be – is bandied about widely. Everybody from WebMD and the Los Angeles Times to PBS and Huffington Post UK has weighed in from various angles.

We here at PhillyVoice sent feelers out to various institutions with a child psychology or parenting wing to see whether they had any advice for readers.

It's a weird question, sure, but one that Deena Weisberg, Ph.D. – senior fellow in the University of Pennsylvania’s Department of Psychology and principal investigator of the Cognition & Development Lab – graciously walked us through.

Her overarching message: Just like most things in the parenting world, grappling with the Santa issue will vary from child to child and household to household. She also offered some helpful tips.

What follows is a lightly edited transcript of that chat:

“If you want to be upfront, it’s simple: Be upfront about it, but acknowledge the difference between how other children will handle the information.

“There is research showing that children are quite savvy in how they take in information from adult sources. They are not automatically accepting everything they’re told. The way they navigate information from parents and peers is sophisticated.

"Who are the trustworthy source for different types of information? As a parent, your opinion is weighted, but if you say, ‘No, Santa isn’t real,’ some might still believe in him at school. Your opinion will be taken seriously, though not always and forever. Eventually, they do figure out the truth is different than what you said.

“You can’t take that back when you say it. If everybody around us says germs cause disease, but someone doesn’t believe it, it starts to plant doubt. You can provide evidence, but once it’s there, there is disagreement in their community about the topic.

“How do they weigh each piece of evidence they get? That’s eventually how they figure it out. There is accumulating evidence that Santa is not real, and they start asking heavier questions. What would it take to visit every house in the world in one night? They start asking questions.

“When they get older, they will report but they still believe. But, how does Santa not get sick? How do reindeer fly? They’ll start looking at it through the scientific method. You can help them out there if you want them to believe or not. Evidence is important.

“There is never an age when they aren’t Nancy Drew or the Hardy Boys. From the very earliest ages on, they get increasingly sophisticated. They’re poking at the world, understanding more and more.

“[When they figure it out] depends on the child and circumstance where they discovered it, or how they were told. They might feel very proud of themselves, that they solved a mystery. It’s a positive effect: ‘I now know what’s going on.’ They think they're in on something really big at that point.

“There is a wide range of ages when they stop believing. They might be upset that something which was meaningful to them is just a story that their parents made up.

“Is it bad [to let the illusion live on in your children’s head as long as it can]? I don’t think so. It’s culturally sanctioned deception. But, if they still believe at 16, you might want to start asking some questions.

“It’s not doing any long-term harm to children. And when they figure it out, they’re so proud of themselves in many cases.

“Because I grew up Jewish, I never believed in Santa. So, it was always a little odd for me. It was a big game people were playing, but I could see from other friends that it was something that was really, really important to them.

“Maybe other kids are happy you know [what's] not true. At 8, 9 or 10 years old, it’s something they’ll likely understand.

“A recent study from Andrew Shtulman at Occidental College really broke it down well. You should really check it out. It addresses many of the issues we talked about today."

“Four-year-olds will deny the possibility of anything that violates their expectations, which includes not only impossible events, like walking through a wall or walking on water, but also events that are improbable but not impossible, like finding an alligator under the bed or drinking onion juice,” Shtulman said of his findings, which he called “surprising.”

“Children are typically viewed as credulous, as willing to believe that anything is possible,” he said.

His discovery of the opposite “seemed to contradict the fact that young children readily believe in fantasy characters, like the Easter bunny and Santa Claus.

"We thus wanted to explore those two facets of development in the same study: the ability to differentiate improbable (yet possible) events from impossible events and belief in Santa Claus,” Shtulman said.