What they're saying about Super Bowl LII: Eagles are America's team (at least for one day) 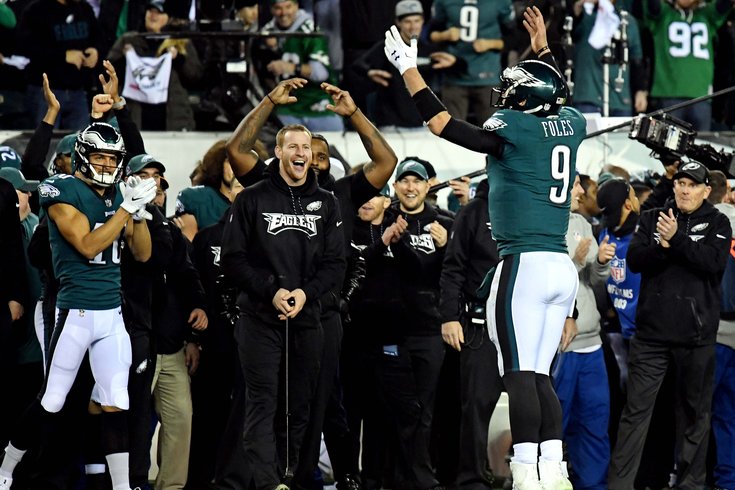 It's here. Super Bowl Sunday. Eagles. Patriots. And kickoff is just a few hours away.

I won't waste your time with a long, boring intro because you've got beers to consume, food to cook, and more beers to consume. Here's a last-minute look at what they're saying about Super Bowl LII between the Eagles and Patriots.

Match made in Super Bowl heaven

The Eagles haven't won since the Eisenhower administration. Think about that for a second...

The 2017 season, at least judging by the injury report, was more cursed than magical, bringing with it a litany of fallen stars that culminated with the loss of young quarterback Carson Wentz in December. Nice try, but better luck next year.

It figures, however, for a team that won its last league title in 1960 and builds the expectations of its fans with each passing year, that the next championship might arrive in a season when all but the most optimistic hopes had been extinguished.

“It would mean everything to win, no matter what,” owner Jeffrey Lurie said. “But to win this way, I just think it would be a great message to the world that it’s not always on paper. You can overcome so much and succeed in life. This is the most resilient group of human beings I’ve ever watched or been a part of.”

For a city that often revels in its reputation as a gritty underdog that can still overachieve – the hoary narrative of Rocky and a hundred other civic tropes – this might be the unlikely team that figuratively climbs the museum steps to its first title since the final month of the Eisenhower administration.  [philly.com]

When you're going up against the Evil Empire, you're likely going to gain a lot of new fans. Although I'm not sure that lasts much longer than one day...

Who America is rooting for in the Super Bowl pic.twitter.com/F79R26zJVE

A year ago, Public Policy Polling released the results of a survey showing the Patriots were the most disliked team in the NFL, with 21% of respondents saying New England was their most hated team, and 42% declaring negativity about the franchise. The poll identified Brady as both the most beloved and most hated player in the league...

The Patriots turn a deaf ear to critics. They make no apologies for their success.

"It's a little like the Yankees were," Patriots owner Robert Kraft told The Times last summer. "Once a team starts winning, it doesn't endear them to fans of other teams."

What's more, they happily turn the knife. Specifically for this Super Bowl, they launched the "Not Done Network," which streamed Patriots-related content around the clock, starting Monday with the send-off rally at Gillette Stadium and ending Saturday night with a live production "Patriots All-Access." The first-of-its-kind endeavor attracted 20 million page views in the first 24 hours, and sounded like a threat, as in, "We're not done tormenting you."  [latimes.com]

This is from a local newspaper in Santa Rosa, Calif. And, even out there, they're rooting for the Birds.

We agree on virtually nothing anymore. We argue about the veracity of mainstream media, about guns, about the FBI, about gender pronouns, about whether a hot dog is a sandwich and the dress is blue or gold. But can’t we find harmony on this one issue? Can’t we all root for the Eagles today in Super Bowl LII?

A lot of people are painting this matchup as a symbol of our fractious politics. The “woke” Eagles feature defensive end Chris Long, noted progressive and recent winner of the NFLPA’s Byron “Whizzer” White Award, and cornerback Malcolm Jenkins, who led the delegation of players that defended pregame protests and demanded social commitment from the NFL. Meanwhile, the three most prominent Patriots — team owner Robert Kraft, head coach Bill Belichick and quarterback Tom Brady — are all loosely affiliated with President MAGA.

But this is a false narrative. I’m sure plenty of Patriots are in the resistance, and that some Eagles hate Muslims. This goes beyond politics, and beyond culture. Hating the New England Patriots should be universal.  [pressdemocrat.com]

If you told me a few years ago that Nick Foles would return to Philly and lead the Eagles to a Super Bowl, I probably would've called you crazy. Now, after nearly retiring, he's back. And the Birds are one win away from winning it all.

The Eagles have bounced back from assorted injury setbacks, including season-enders to Jason Peters, Darren Sproles, Jordan Hicks and Chris Maragos, to give the franchise a chance to win its first NFL title since the pre-Super Bowl year of 1960. Foles, who has been traded, benched, cut, mocked and pushed to seriously consider retirement, has also survived in his own right to land on the biggest stage in sports.

Foles, who struggled in the final two regular-season games, but has sizzled in the playoffs, brings a certain appreciation for what this team has been through.

“I think the ups and downs of this season ... my career hasn’t always been smooth,” said Foles, 29, who in 2016 pondered retiring from football to become a pastor. “I’ve learned a lot going through the up and then going through the down. To have several weeks of that roller coaster (this season), my previous part of my career has equipped me to handle it and really just (to) keep plugging away.”  [usatoday.com]

While Eagles fans know the names of most (if not all) the players on the roster, there's a chance one or more Eagles players becomes a household name by Monday morning.

While the Patriots' mystique has been well-documented, several Eagles have a chance to raise their national profile and become household names on Super Bowl Sunday, here are 10 you should watch:

Malcolm Jenkins isn't just one of the top safeties in the NFL, who is equally adept at playing deep coverage in the passing game as he is dropping into the slot or attacking the line of scrimmage in the box against the run or as a blitzer, he's also one of the most politically active players in the NFL...

If Jenkins gets a key interception off Brady or plays a roll in an Eagles' victory, he could become one of the faces of the NFL.  [nj.com]

On Saturday, the Hall of Fame quarterback spoke to the Birds. Here's what he told them:

"We know the Patriots. They're a tremendous team. Their quarterback is the greatest to ever play. Bill Belichick is the greatest coach to ever coach. You know what they're about," Favre told NBC Sports Philadelphia of his speech to the Eagles. "They're going to play the whole game. Don't ever say -- kinda like last year, 'We have it won and we're going to go to the drive-thru.' That's not a good idea."

Favre, of course, was referencing Atlanta's collapse against Brady's Patriots, who stormed back from a 28-3 deficit in a little over a quarter of play to force overtime and eventually take home yet another title. But his message wasn't so much about avoiding defeat as it was embracing the opportunity on the game's biggest stage.

"I congratulated them on the year they've had; it's a wonderful year," Favre said. "And just encouraged them to enjoy the moment. You think you're always going to come back after you've gotten a chance to go but it's such an honor to play in the Super Bowl. And to just embrace that. And I told them, 'this is probably something I should have told you two weeks ago, but this is the longest two weeks of your life and it's going to be the longest 24 hours plus of your life. The game at this point can not get here quick enough. But it's going to slow down even more.'"  [nfl.com]

No matter who wins Super Bowl LII, history suggests it's is going to be a close one.

Even though the Patriots are a dominant force in the NFL, what stands out more than anything is just how dramatic these Super Bowls have been. Nothing was ever really easy for them, with maybe the exception of their third Super Bowl victory, against the Eagles. And even then they didn't cover.  [cbssports.com]