What they're saying about the Phillies: Halladay's Hall of Fame eligibility and free agent consolation prizes 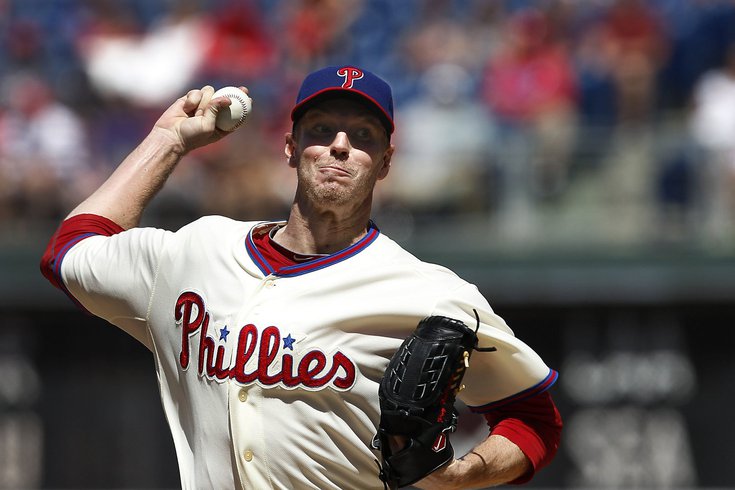 It's sad to say it in the middle of an NFL season, just months removed from an Eagles Super Bowl championship, but thinking about spring training is a pretty nice thought right now for Philly sports fans.

If you have a few minutes to turn your attention away from the horrid bloodbath that is the Eagles 2018 season, there are a few Phillies news items, rumors and takes floating around right now. Here's a look:

Halladay to the Hall?

Former Phillies pitcher Roy Halladay is eligible for the Hall of Fame for the first time this summer.

He's not the only player with Philly ties to be up for the hall. Freddy Garcia, Roy Oswalt, Juan Pierre, Placido Polanco and Michael Young are all newcomers while Curt Schilling, Billy Wagner and Scott Rolen remain on the ballot.

The one-year anniversary of his tragic death was earlier this month. Here's what Koy Zdimal remembered on that occasion:

To wrap up this remembrance of Halladay I wanted to leave this personal story Halladay which I believe truly shows the man that he was. I was eight years old when Halladay came to Philadelphia. In 2010 my Dad and I were at the Phillies home opener. When the game was over I asked if we could go down to the lot where players would leave the park in hope of getting an autograph, although not really expecting to get one. After about 15 minutes of waiting my Dad was ready to leave and right before we were about to leave I recognized a familiar face driving away. It was Roy Halladay. Not regarding my safety at all I took off chasing his car through the slow traffic in hopes of getting him at a red light. Halladay, who was driving the car, pulled over to the sidewalk I was running on, rolled his window down and had his wife hand him my ball, signing it for a random crazy kid.  [That Ball's Outta Here]

The Phillies will get some early exposure next year. The finale of their season-opening series against the Braves at Citizens Bank Park on March 31 is slated to be the first nationally televised Sunday Night Baseball game on ESPN.

The big question is who will be hitting in the heart of the Phillies' order to provide run support for Aaron Nola that night. [NBC10]

ESPN gave the Phillies 5 way to spend their money wisely — to avoid the "stupid" spending mentioned by owner John Middleton. Here are some of the interesting (and less than obvious) ones...

2. Sign one of three starting pitchers: Patrick Corbin, Nathan Eovaldi or Dallas Keuchel. The addition of one of those three would make a rotation that already includes Aaron Nola, Arrieta and Nick Pivetta quite formidable.

3. Sign a closer. Craig Kimbrel is the best available option, but there are many closers in the market, including Andrew Miller and Zach Britton. If the Phillies go after both Machado and Harper, they can save some money by spending less on this spot.

4. Sign Marwin Gonzalez, the former Astros utilityman. He can play anywhere, and like Ben Zobrist, he has embraced the role. [ESPN]

NY post writer Joel Sherman says the Phillies spending crazy money on both of the top free agents — Bryce Harper and Manny Machado — could be a potential disaster.

Let’s concentrate on the stupid for a second. Because wouldn’t you be spending record dollars as a finishing piece to a championship? Put Harper on the Phillies, is that a title contender? Heck, put both Harper and Machado on the Phillies and I don’t think that is a championship contender — unless it is for the championship of fascinating clubs or potential dysfunction. [NY Post]

MLB insider Ken Rosenthal thinks the Phillies may have to settle this offseason, at least when it comes to Bryce Harper.

When putting his decision into context, Rosenthal said he thinks the Phillies will miss out on Bryce Harper and that Brantley will be their consolation prize. That goes against the report from Bob Nightengale that the Phillies are more than likely going to end the offseason with Harper in their payroll.  [That Ball's Outta Here]