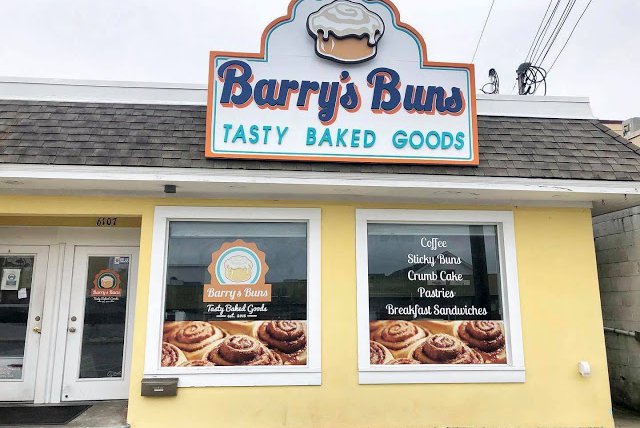 Philadelphia bakery Barry's Buns will open its second location in Wildwood Crest on May 7, 2021.

Five years after opening its first shop in Chestnut Hill, Barry's Buns is headed to the Jersey Shore.

Owners Joel and Jen Singer are set to open a new location May 7 in Wildwood Crest. The pastry shop will sit just a few blocks away from the beach and feature the same menu as the Chestnut Hill store.

"A great opportunity arose for a commercial space, and we knew it was an opportunity that we couldn't ignore," Joel Singer said in a press release. "The location found us. Wildwood has been our vacation spot since both of our childhoods, and Jen's parents even own there. It's been a dream of mine to own a bakery at the beach."

In addition to their fresh-baked sticky buns, cinnamon rolls, waffles, cakes and cookies, the menu at the Wildwood Crest location will include made-to-order breakfast sandwiches and Nitro Coffee. The shop also offers takeout and catering.

The Chestnut Hill location opened on Germantown Avenue in 2016. The Singers later established an outpost at the Bourse Food Hall, but they closed it after losing business during the coronavirus pandemic.

Joel, whose middle name is Barry, began his baking career at just 14 years old, when he opened up his own cheesecake business. He earned a scholarship to get a degree in Pastry Arts from Johnson & Wales University in Rhode Island and later served as a regional bakery coordinator for Whole Foods Market in the Mid-Atlantic.

Before opening up Barry's Buns, Singer worked at the Pennsylvania Convention Center and also served as assistant pastry chef at The Rittenhouse Hotel at Lacroix.

Jen Singer handles the business side and day-to-day work at Barry's Buns.

"It was always a lifelong dream for Joel to have his own bakery, and sticky buns were a childhood favorite of his," Jen said. "He always talks about the times he and his dad would bring home sticky buns for the family. This business is family for him. It's a family thing for all of us. And that's what you see at the shore. Families coming together to enjoy their time together, and we can't wait to be able to insert our delicious treats into their memories."

The Wildwood Crest shop will open in a 900-square-foot space located at 6107 New Jersey Ave.

In advance of its opening, Joel and Jen are painting rocks with the Barry's Buns logo and leaving them around the neighborhood. Those who find them can bring them in and redeem them for a free half-dozen box of sticky buns.

The Singers plan to do the same scavenger hunt in Chestnut Hill, planting about 20 rocks around the neighborhood.