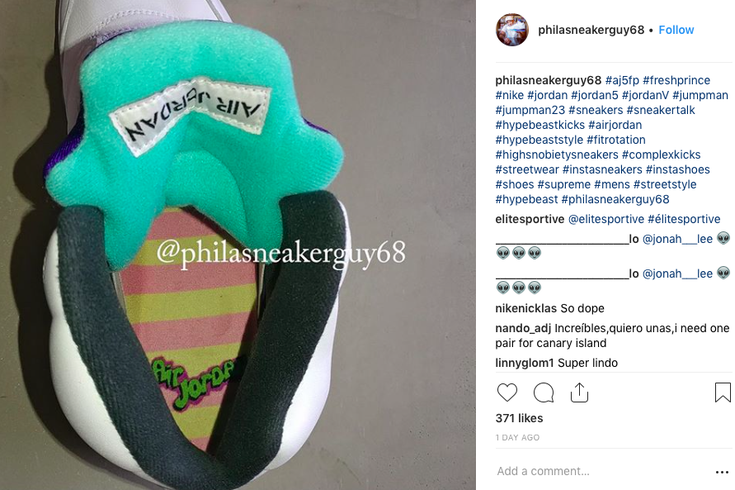 Will Smith's new limited edition Air Jordan 5's are inspired by "The Fresh Prince of Bel-Air."

Sneakerheads are probably well-acquainted with the no-fi aesthetics of "unboxing" videos, which show off fresh and vintage kicks with a reverence that crosses full-steam into fetishization.

Most of the time, there's some degree of self-awareness about the chintzy nature of the production. It becomes part of the genre's appeal. Brad Hall, for example, is a master of the art. He speaks in a monotone and appears to have no business drooling over Jordans (literally, he tastes the soles and reviews them as "not great").

Over the past five years, West Philadelphia's own Will Smith has been the subject of various customizations of Nike's iconic Jordan sneakers. In 2013, The "Fresh Prince of Bel-Air" star had a "Bel-Air" Jordan retro shoe made in his honor. Earlier this year, he received a customized version of Nike's Air More Uptempos in much more vibrant Fresh Prince coloring.

Later this month, Smith is turning 50 and celebrating by bungee jumping into the Grand Canyon from a helicopter flown by Tom Cruise. But that's not all he's doing, according to a little campaign he just launched on Instagram.

RELATED: Michael B. Jordan has challenged Will Smith to a cook-off

Smith is holding a birthday contest to give away 23 pairs of a special edition Jordan 5 he developed with the NBA legend. They take clear inspiration from the "Grape" Jordan 5's Smith wore on his sitcom in the nineties.

To present the new footwear, Smith made his very first unboxing video—complete with the cheesy editing and a separate Instagram account paying homage to Philadelphia.

It’s your LAST CHANCE to kick it with me for my 50th birthday! . BUT NOW... I got 23 pairs of my limited edition Fresh Prince Jordan 5s to hook you up with. . Good Lookin’ Out @NIKE and @jumpman23! . Link in bio to enter! Big thanx @philasneakerguy68 ;)

Here's a closer look at the sneakers that will debut on Sept. 25. The white "Fresh Prince" versions will actually hit retail shelves, so you can still get a pair if you don't win the contest.

You can enter the contest over at Omaze for a chance to win a pair of the limited edition sneakers.