The fast casual stir-fry shop debuted in Rittenhouse in 2013, and has since expanded to 10 spots across Philadelphia 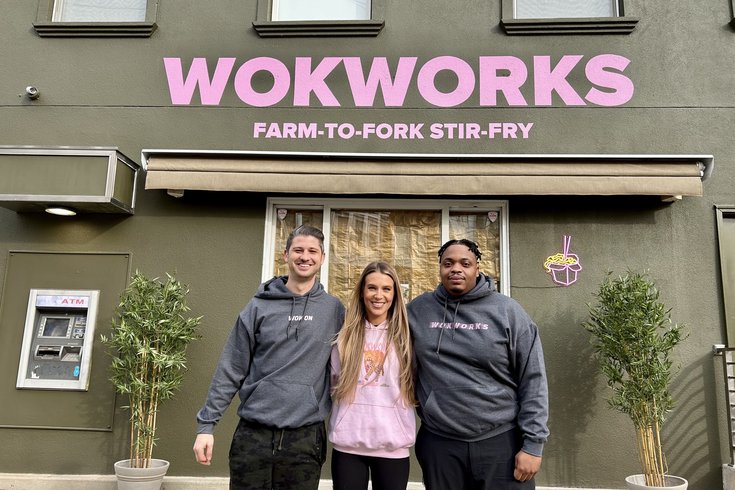 Wokworks, the fast casual bowl and stir-fry restaurant with kiosks and food carts across Philadelphia, is opening a new flagship location in Fishtown with a revamped menu and late-night hours.

After more than a decade serving up Asian-style stir-fry bowls at pick-up windows, kiosks, and food carts across Philadelphia, Wokworks is opening a new flagship shop in Fishtown.

Owners Brennan and Samantha Foxman have crafted the company's largest menu to date at the new restaurant, which opens Friday, Jan. 13 at 1429 Marlborough St. in the former location of Pizza A Pie. After living in the neighborhood for the last seven years, the Foxmans had the opportunity to open their newest fast casual Asian bowl shop along the bustling Frankford Avenue corridor, and said they couldn't pass it up.

The new, revamped menu includes the introduction of bento boxes, which can be customized with chicken, steak, shrimp, or vegetables. Wokworks has also expanded its options for gluten free and vegan diners, including General Tso's vegetables and tofu dishes. Other new menu offerings include tiger fried rice, fresh juice shots, and cinnamon sugar wonton crisps.

Customers can look for other menu items popping up throughout the year. In addition to signature stir-fry favorites on every restaurant's menu, each location has its own custom menu items.

Everything patron's order at Wokworks is made fresh and from scratch, then seared over a wok at a very high heat. Each rice bowl is packed with flavors and varied textures. The average cook time is just 90 seconds, allowing diners to get their food quickly and get on with their day.

The Foxmans have also teamed up with friends and partners to start a culinary robotics company, Range Robotics, where they will later debut the wok-bot — a cooking robot. The wok-bot will cook food to the perfect temperature at each wok, and will arrive at the Fishtown location by this spring before being sent to other locations throughout the city.

The Fishtown location marks Wokworks' 10th location in the region, and ninth in the city. After the opening of its original spot in Rittenhouse, the small chain migrated to Brewerytown, South Philly, Roxborough, Cheltenham, Northeast Philly, Spring Garden, Drexel University's campus, Temple University's campus, and Einstein Medical Center in Logan.

The Fishtown shop will be open Sunday, Tuesday, Wednesday, and Thursday from 11 a.m. until 9 p.m., and Friday and Saturday, 11 a.m. to 1 a.m. The expanded hours will help quell late-night cravings, and takeout, delivery, pick-up, and catering options will make Wokworks available to the entire community.

For its grand opening on Friday, Jan. 13, visitors are invited to test their luck and flip a coin to win a free rice bowl from 11 a.m. until 3 p.m.