The wonderful women chefs of Philadelphia

There can never be too many female cooks in the kitchen 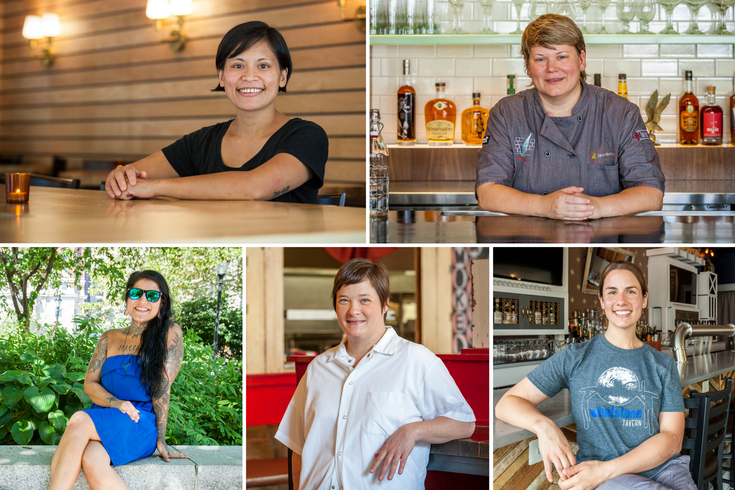 Let's get one thing straight: Philadelphia has a lot of great chefs. In recent years, the city has become a major food destination and its restaurants are constantly splashed across the pages of national magazines receiving accolades for their dishes, their vibe and the culinary wizards cooking it all up. Jose Garces, Marc Vetri, Kevin Sbraga and Michael Solomonov alone have spawned enough celebri-chef features to fill a September issue.

But there are plenty of other chefs who deserve a little extra attention, too. Particularly, as in many industries struggling with gender parity, Philly's female chefs might not be getting as much love as they deserve. In a country where women only occupy 6.3 percent of head chef positions in the 15 most prominent restaurant groups, we're lucky to be home to so many female culinary powerhouses. To celebrate their work - and, you know, all that yummy food - we picked the brains of some of Philly's top women chefs. 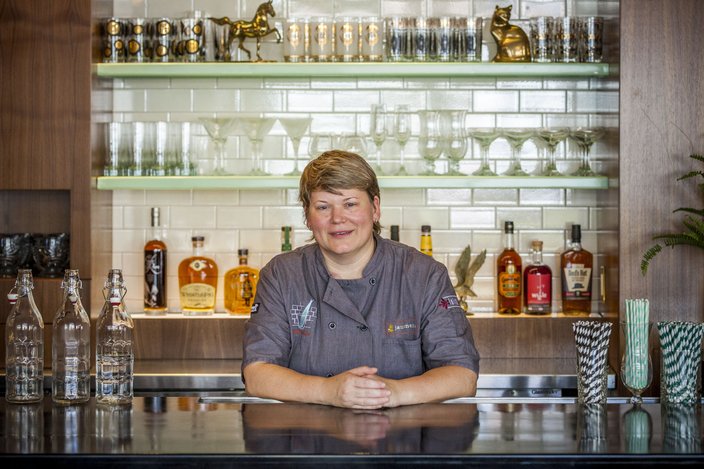 If you're a diehard foodie or even just a Restaurant Week regular, chances are you've eaten one of Marcie Turney's dishes. Over the past few years, she and partner Valerie Safran conquered 13th Street, opening five restaurants (including the upcoming Bud & Marilyn's), two boutiques and a gourmet market. All told, the dynamic duo serves Spanish, modern Mexican, Mediterranean, Italian and, with this latest addition, American cuisine.

Turney, for one, is excited about this next flavor adventure: "At our new restaurant there’s no box around anything because it’s retro American but updated, and American food is everything. That’s what's so exciting to me, is to do all of those flavors," she said.

Despite her current prominence among Philly's chefs, Turney actually studied to be a graphic designer. As that industry went digital she made a career change but, as her patrons know, that artistic eye never went away. Each restaurant's culinary theme is matched with equally well-executed interior design.

While Turney and Safran brought in designer Kate Rohrer to bring Bud & Marilyn's mid-century theme to life, the pair always has a big hand in creating the atmosphere, from designing the kitchens to picking out string lights. Of course, now their mini-empire gives Turney and Safran the luxury of taking the time to make sure their newest space is just right.

After all, a lot has changed in the 11 years since they opened Lolita with Turney in the kitchen and Safran at the front of the house.

"As we grow we have awesome employees and people that grow with us and kind of move place to place. In a way, it gets easier because there are people we can depend on," Turney said. 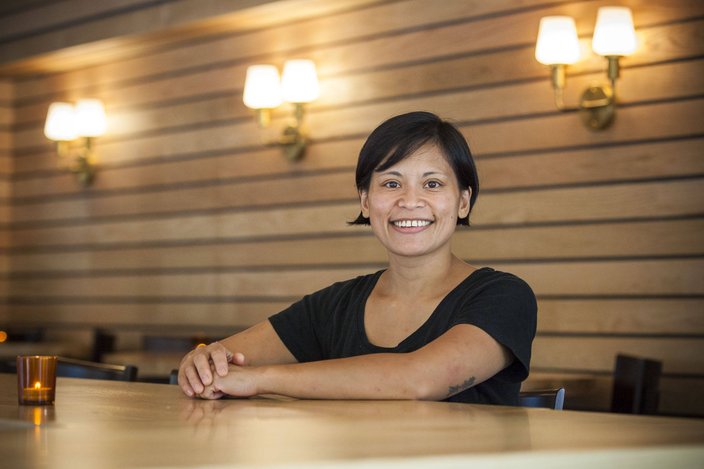 Like Turney, Karen Nicolas has put down roots in Philadelphia -- but that's only after years of working in some of the country's best kitchens and roaming the world on culinary adventures. Before landing at Tria, where she now manages five kitchens, Nicolas ended up in the area as Executive Chef of Citron and Rose in Merion. Before that, her stint at Equinox in Washington D.C. got her recognized as the "Best New Chef" of 2012 by Food & Wine.

But before all of that, Nicolas grew up as an active kid in State College who knew she didn't want a desk job. When a high school Home Economics teacher suggested she follow a career in the kitchen she listened, later heading to culinary school in Rhode Island.

"From there I became very nomadic because I was very determined to work in all the big food cities," she said.

She started in San Francisco then traveled to Las Vegas to work under her favorite celebrity chef Charlie Palmer, later becoming his sous chef in Sonoma County. From there she hopped around between Chicago and New York, working with Tom Colicchio at Gramercy Tavern along the way.

"Those two, their styles are definitely two of the biggest influences in my career. I want to say I adopted their style of New American with a little more feminine touch," Nicolas said.

Now she spends her days largely out of the kitchen, managing Tria's menus, staff and multiple locations. ("It's a lot of prioritizing and choosing your battles of what to tackle first," she said.) After checking plenty off of her career to-do list, Nicolas has a different focus for her (little) downtime.

"For me my bucket list is just travel destinations. I think I have like 90 lists of places I want to go!" 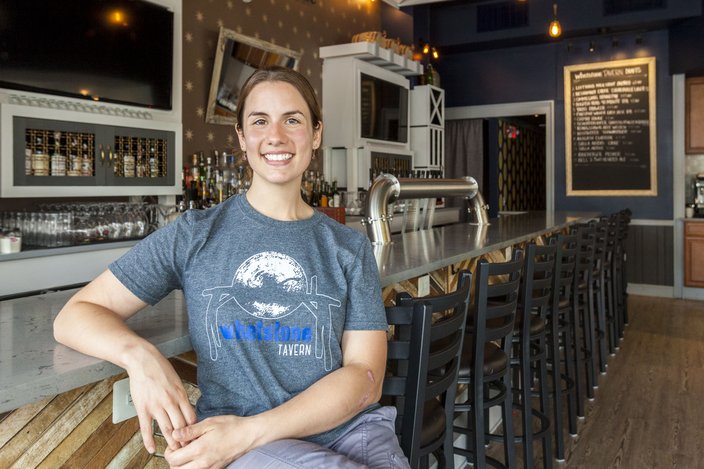 Jessica Nolen also grew up destined to spend her life making delicious food. From a young age, she was always trying out new recipes -- mostly on the sweet side -- and cooking with her family. But when her parents brought Nolen's extra baked goods into a local cafe one day, her fledgling career really got rolling. At just 12 years old, "Desserts by Jessica" landed on the menu at Outta The Way Café in Derwood, Maryland.

Fast forward to the present and Nolen is now known for working alongside husband Jeremy as pastry chef at Brauhaus Schmitz and the newly opened Whetstone Tavern. Though she's always been a bit in love with French baking techniques, she's currently whipping up German and American desserts, respectively. Among the different cuisines, though, Nolen sees more similarities than differences.

"They’re all kind of intertwined. They’re like the same thing in different versions. Everyone has a pancake, their traditional layer cake – but all cuisines can be refined," she said.

As a pastry chef, Nolen has often played a bit of a sidekick role, but all of that is about to change. If all goes according to plan, she'll be opening her own bakery and cafe this fall in Society Hill. Equally excited and nervous, the challenging nature of the task isn't stopping Nolen from turning her childhood sketches of a bakery into a reality.

"I always tell myself if everyone focused on the fear or the 'what-ifs,' no one would ever accomplish anything," she said. 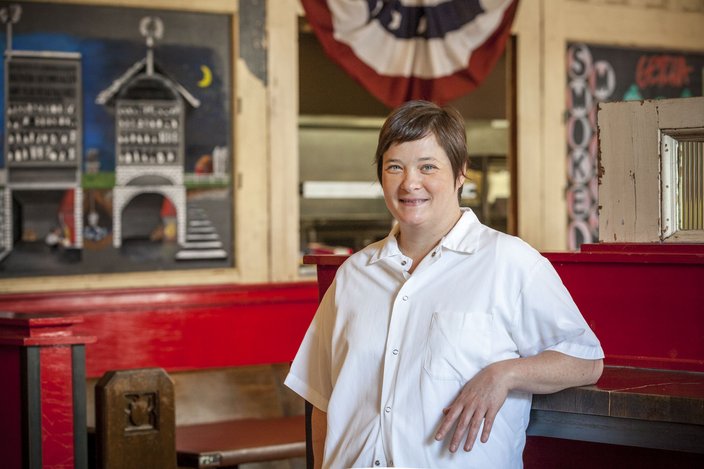 There is only one Queen of Barbecue in Philadelphia, and that is Erin O'Shea. The brains behind Percy Street Barbecue's mouth-watering menu, O'Shea is a self-taught pitmaster. After working at The Frog & the Redneck in Virginia with Jimmy Sneed, who O'Shea called one of her biggest influences, she came to Philly. In 2009, O'Shea teamed up with Michael Solomonov and Steve Cook to open Percy Street and the rest is history.

"My heart has always been in Southern food, but I had never done barbecue commercially. Just with friends. So [Percy Street] was the combination of those two things: it was exploring what is truly at the core of American food traditions -- and I love fire," she said.

In many places, a "true" barbecue joint begins smoking at 2 a.m. and sells out by 2 p.m. But O'Shea always wanted her barbecue housed in a real, live restaurant. The bustling nature of the business and making patrons happy is what really inspires her.

"There are certain nights ... [where] the din of the dining room, it reaches a certain decibel level and you look out and the lighting is right and the music is right and the dining room is full and the servers are hustling and the kitchen is moving in sync and everything is working the way it should for just a minute. People are happy and they’re passing plates and they’re smiling and there are buckets of beer on the table and cocktails being walked across the floor and there’s brisket being put down and people going “Ooh!” – That is the perfect moment. Even just thinking about it now gives me chills," she said.

It gives us chills, too. 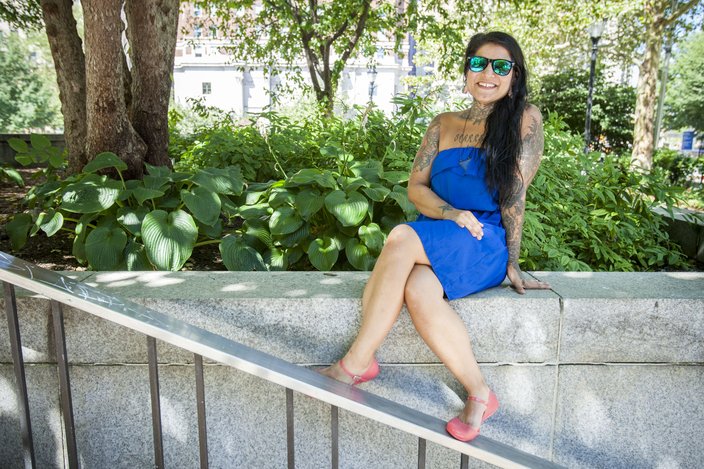 On the outside, Jennifer Zavala may look like a tough-as-nails tattoo lover with a take-no-prisoners attitude. But in reality, Zavala is a self-proclaimed socially awkward chef and mother who is as flummoxed by her reputation as she is bubbly. She may look intimidating, but any perceived attitude is only skin deep.

A self-taught chef, Zavala found a slice of fame when she made it onto the sixth season of "Top Chef" in 2009. Unfortunately, she was cut in the first round of competition, something that was hard to overcome personally and professionally.

"I took it so bad and it affected me in that sense of going up in front of people, because it felt like all anyone could ever see was this mistake that I made because you have to relive it," she said.

In a strange way, it also made it harder for her to find work. "There’s nothing like being famous and broke," she laughed. "Everyone’s like, 'Oh you were on this show, so you probably have this ego' – and I’m like no, no I’ll do it!"

Now Zavala spends her time filming new cannabis-inspired web series "High End Cuisine," volunteering, consulting with Philly restaurants and filling in for chef friends when they need a day off. But when she gets into competition mode, like at this year's Burger Brawl, she'll admit she might get a little sassy - though it's all in good fun.

"I don’t have any personal beef with anyone, but I do talk a lot of s--- to people because it’s fun! ... I’m Jen from the other side of the tracks. I wanna get down, just have fun and relax!"

Of course, there are plenty more where that came from. Tell us about your favorite female chef in the comments below!