Staying true to the 'Wu-Tang is for the children' mantra, Young Dirty Bastard stood in for his late father ODB 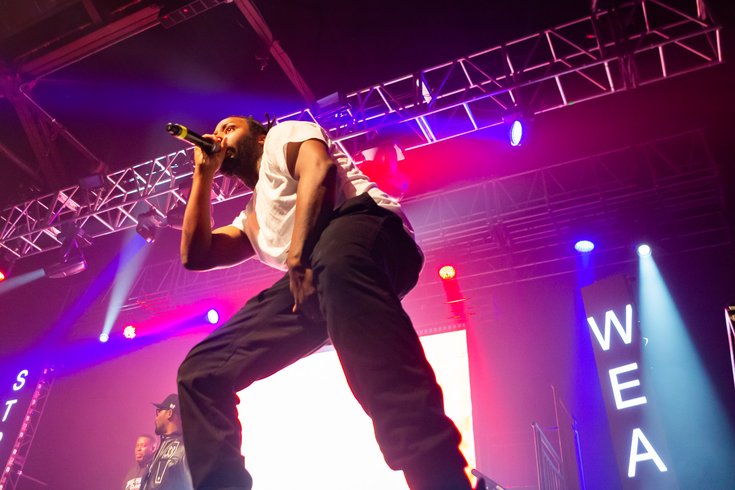 The Wu-Tang Clan was more than halfway through its no-frills, 90-minute set on Thursday night when Method Man – arguably the most widely known member of the Staten Island crew – offered some words that put everything into perspective.

The show at the Franklin Music Hall (formerly known as the Electric Factory) was convened to celebrate the silver anniversary of their debut album, “Enter the Wu-Tang (36 Chambers).”

“The average age up here is 48,” Method Man rasped into the mic.

It was his way of granting amnesty to old heads who weren’t able to bounce on command in the packed house, with the jokingly profane statement that any youngsters in the audience best pick up the slack or else they should get the (expletive redacted) out the building. (He didn't really mean it.)

Well, that wouldn’t be an issue on either line of that age divide. Wu came, conquered and is right now resting up to return to that same stage for a sold-out show tonight.

A few things made the event, in which the Wu was said to have performed the album in its entirety for the first time since the early 2000s (at least in the U.S.), so noteworthy.

For one, Wu-Tang doesn’t roll like it used to: the 25th anniversary show represented something of a grand return that started late last year, will continue this spring in the United Kingdom, and – for fans – is hopefully a harbinger of additional shows to come this calendar year.

For another, Thursday night wasn’t even supposed to happen in the first place. When the Wu announced its anniversary shows, only two were on the schedule: Friday night in Philly and Saturday night at Terminal 5 in New York City.

At each, they plan to perform the entirety of “36 Chambers” in order – with the exception of “Wu-Tang Clan Ain’t Nuthing ta F’ Wit,” which they saved for the ostensible encore of that portion of the show.

After making sure the crowd knew of their pure hip-hop upbringing and mission – not to mention RZA embracing a Philadelphia which supported them at the start, as Masta Killa did in an interview with PhillyVoice earlier this week – the Wu drifted into tracks from “Wu-Tang Forever,” “The W” and other albums (including member's solo tracks like Raekwon's "Ice Cream.")

They closed with “Triumph” and “Gravel Pit.” Though RZA would apologize for sound issues before the set ended, the acoustics were pretty damn good in a room where that’s not always the case at rap shows. (That’s not a scientific observation, just one from personal experience.)

There was a huge bottle of Grey Goose vodka that the Clan exhorted the crowd to pass around and finish, despite one of them noting that they’ve might’ve been passing a weapon down to the audience. (For the aggressive feel of the songs, though, the crowd was anything but; it felt like a family party with a $100 cover charge but without a lick of discord.)

Celebratory champagne was also employed to drench the crowd at the front of the floor on numerous occasions.

Popa Wu, a Clan affiliate, also held court to implore attendees to not "let anybody take your minds away from you," railing against technology like mobile phones that take people away from being engaged with the world around them. (That mobile phones were used to capture videos and photos of the anniversary set presented quite the stark dichotomy to his words.)

Despite the evening’s celebratory vibe, looming over the festivities was the member who wasn’t there, that being Ol’ Dirty Bastard, the creative jester of sorts who died in 2004. 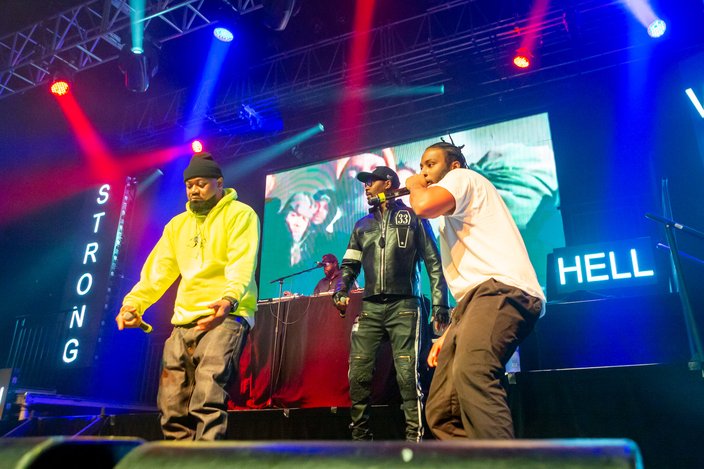 A bright “RIP ODB” sign hanged behind the stage wasn’t enough to fill that gap, but having the late performer’s first-born son, Young Dirty Bastard, take his place came close to doing so. The antithesis of his hard-partying and -living father, he dressed, performed and breathed the role admirably.

Hadn’t he been there, the show would’ve felt emptier. That he was there meant they could honor ODB by performing abbreviated versions of his solo tracks “Shimmy Shimmy Ya” and “Got Your Money.”

Just goes to show you that Wu-Tang truly is for the children, a mantra the RZA reiterated on stage as a means through which their spirit can be passed down from fans there for the band when “36 Chambers” dropped in 1993, to those in attendance who weren’t even born at that time and beyond.

For people going to tonight’s show, Wu-Tang took the stage around 10:10 p.m., but the floor and seats were packed well before that on Thursday.

Also, you should expect Method Man (a Giants fan) to offer up his quarterback recommendation for the Eagles moving forward. Spoiler alert: it doesn't include the one who led them to a Super Bowl.