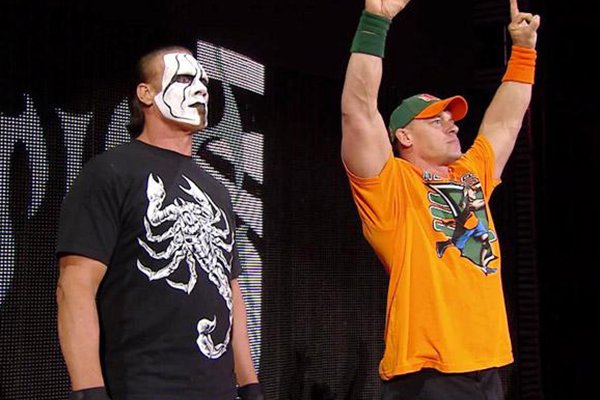 Tampa’s Amalie Arena was the site for Monday’s Raw, and while we never got an answer as to where Seth Rollins’ statue was that Sting mysteriously had vanish, but we found out that the WWE World Heavyweight Champion and United States Champion would be pulling double duty at Night of Champions in three weeks.

That’s right, Rollins will defend the WWE World Heavyweight Championship against Sting and also defend the United States Championship against John Cena. We also saw the Dudley Boyz in action for the first time on Raw since 2005. The Divas had a prominent role in this episode of Raw, but unfortunately I think much of it fell very flat. But it was nice to see the Divas Revolution take some steps forward on Monday night.

Before we round up what happened on Raw on Monday night, here are some bits of news:

• There was a shooting outside the WWE Performance Center in Orlando, Florida on Monday afternoon. A man who was reportedly obsessed with a female wrestler allegedly ran towards a police officer with a knife and was shot.

• WWE released Zahra Schreiber, the girlfriend of current WWE World Heavyweight Champion, Seth Rollins. Schreiber’s past came back to haunt her in the form social media posts from 2012.

• I reached out to WWE to try to confirm if Philadelphia did indeed submit a bid to host WrestleMania in 2018. It responded with this statement:

Of course, “announced” does not mean locations haven’t already been decided. The Philadelphia Sports Congress has not yet responded to my request for comment.

• Hulk Hogan went on a media tour on Monday apologizing for the words he used that were caught on tape and brought to light not long ago, resulting in his release and banishment from WWE.

Sting made his long-anticipated return to a WWE ring last Monday night, and attacked WWE World Heavyweight Champion, Seth Rollins, during what was supposed to be the unveiling of his statue. On Monday night, Sting took the mic to open Raw and basically said that he’s still cool with Triple H, but can’t take the injustices that have happened since Rollins won the championship back at WrestleMania. He said Rollins wasn’t half the man Triple H was, something Stephanie McMahon corroborated during a backstage segment.

I honestly am not sure why that’s a good thing to say your champion is less than half the man the COO of the company is, especially when one week prior you were about to give him a statue after saying how amazing he was. This writing makes no sense and even if this is to plant the seeds for a Rollins/Triple H feud down the road, the writers are not doing a very good job of it.

And, of course, in the main event segment where Rollins called out Sting to find out where his statue from last week was turned into a promo pretty much for a rematch between Rollins and Cena. Yep, Cena returned during the last segment of the show and challenged Rollins to a rematch for the United States Championship at Night of Champions, thanks to an obliging Stephanie McMahon. No Sting.

Ah, well, yes, there was Sting. At the very end of the show where he came on the stage and posed next to Cena as Raw went off the air. I still need to know what happened to that statue!

I love The New Day. They’re the best thing on WWE television at the moment. This “Save the tables!” segment on Raw is why they’re great.

The Dudley Boyz were in action on Raw for the first time in 10 years, and it’s like they never left. They defeated The New Day in a Non-Title match, which likely will lead to another match between the two teams at Night of Champions.

The Prime Time Players, who were on commentary during the match, also have a rematch waiting for them. I think The New Day will keep the Tag Team Titles for a while, and they showed why they deserve a long run on Monday night, when they bubble-wrapped the “last table in the building” so the Dudleyz couldn’t break it. They also started a “Save the tables!” chant, which caught on pretty strong with the crowd. These guys are one of the most entertaining acts on Raw right now, so cutting their legs out from under them won’t be a smart business move if WWE decides to do that. I love the Dudleyz, and the Prime Time Players are cool and all, but The New Day brings it every week. They deserve to stay at the top for a long time.

Finally we got some storyline advancing in the Divas division, as the members of the winning team at SummerSlam, Paige, Charlotte and Becky Lynch, would take part in a Beat the Clock Challenge to find out who would challenge Nikki Bella for the Divas Championship at Night of Champions.

However, the matches left a lot to be desired. Becky Lynch defeated Alicia Fox by submission in 3:21, and Charlotte defeated Brie Bella by pinfall in 1:40. Paige couldn’t defeat Sasha Banks despite hitting her with the RamPaige, as Tamina and Naomi grabbed Banks and pulled her to the outside. By the time Paige got Banks back in the ring, the clock ran out, and Charlotte was named #1 Contender to the Divas Championship. She’ll take on Nikki at Night of Champions, and hopefully defeat her. Maybe then that’ll be the true beginning of the Divas Revolution.

Speaking of Divas, I’m really not a fan of how Lana was portrayed on Monday night. After Dolph Ziggler’s match with Rusev, we saw Summer Rae sneak into Ziggler’s dressing room during a backstage segment, and then later on we saw Summer Rae run down the hallway backstage after Ziggler ostensibly told her to take a hike. Then later in the program, we have Lana being the overjealous type, angry at Ziggler for being in that position, even though her anger should have been geared towards Summer Rae.

Summer Rae then gave her story to Renee Young during a commercial break, which Young played for Lana during a backstage interview segment. Lana, of course, believed Rae’s version of events and walked away. This type of storyline doesn’t work in today’s society. I’m already over it.

Ziggler and Lana will be guests on Miz TV on this week’s SmackDown.

This is the inherent problem with female booking in WWE. They make women look ridiculous and I’m not even worried about how this story progresses because it already sucks. Having Lana booked in that way does her no favors and makes her look really, really bad. We’re supposed to feel sympathy for Ziggler now, and what good is that? In this particular storyline, we should be feeling bad for Lana. But now we’re just sitting here twiddling our thumbs asking ourselves, “Why won’t she believe Dolph?” It really makes no sense, and it’s a bad storyline.

We finally saw the Intercontinental Championship defended on television, as Ryback retained his title against Big Show. Show got on the mic during the match and admonished the crowd for telling him to retire. Good times.

The Miz was on commentary, so I’m sure we’ll see another title match between the champion and the challenger before long. Or we’ll see the feud we’re all clamoring for – Miz vs. Big Show. Because that’s what we need.

Kevin Owens and Cesaro fought in a SummerSlam rematch, and it was a damn good match. It’s about time we got a title involved in this feud, because both matches have been spectacular between the two. Rollins wasn’t even carrying around the United States Championship with him on Raw, so there’s no good reason at all for this feud to not at least get the title thrown into it.

I did like how Braun Strowman was booked as a monster, since that’s how he should be booked for the time being. I also liked how he goaded Roman Reigns into attacking him on the outside of the ring for the DQ win against Dean Ambrose, and then no-selling a chair shot to the back later.

Luke Harper and Bray Wyatt would come out and help Strowman finish off Reigns and Ambrose. Now, we wait to see who the third man is to join the 2/3 Shield, right?

• Dolph Ziggler d. Rusev by disqualification after Summer Rae attacks Ziggler after he hit Rusev with the Zig Zag. Lana jumped in the ring and fought with Summer Rae.

• #1 Contender Beat the Clock Challenge for the Divas Championship: Becky Lynch d. Alicia Fox by submission via the Disarm-her in 3:21.

• #1 Contender Beat the Clock Challenge for the Divas Championship: Charlotte d. Brie Bella by pinfall via the Natural Selection in 1:40.

• Kevin Owens d. Cesaro by pinfall via the Pop-Up Powerbomb.

• Braun Strowman d. Dean Ambrose by disqualification after Roman Reigns attacked Strowman on the outside of the ring.

• #1 Contender Beat the Clock Challenge for the Divas Championship: Paige vs. Sasha Banks ended in a No Contest after Paige couldn’t beat Banks in 1:40.

• Non-Title: The Dudley Boyz d. The New Day (c) by pinfall via the 3D when D’Von pinned Kofi Kingston.