In Year 2, Eagles' Pederson plans to stay aggressive on fourth down – and that's a good thing 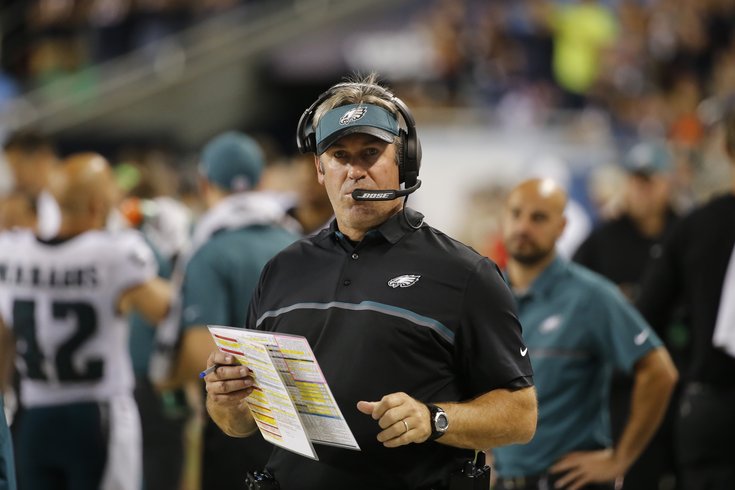 A lot was made about Doug Pederson's play-calling ability in his first year as the Philadelphia Eagles head coach, specifically his aggressive nature on fourth down. Although the team got out to a hot start, converting each of its first five attempts, once November rolled around, the offense cooled faster than the weather.

And following the conclusion of a 7-9 season, Pederson said that he was planning to evaluate everything, himself included. Over the course of their final eight games, the Eagles converted just eight of 22 attempts (or 36.4 percent) and finished under 50 percent (13-for-27) for the year.

Because of that, one might expect Pederson to be slightly more conservative in Year 2. Nope.

"Listen, I'm going to be as aggressive as I can, when I can. That’s who I am," Pederson said Thursday. "You know, without sacrificing the team or putting ourselves in bad situations, we've definitely got to have all the information when you make these decisions. But at the same time, I want to show the aggressiveness, and show the team and the guys that my confidence level is extremely high in the guys to execute a fourth-down play, a short-yardage play, a goal-line play, or whatever it is. So I'm going to maintain that aggressiveness."

Good. Pederson should most definitely continue to be aggressive in short-yardage situations, for a couple of reasons.

First, Carson Wentz was the reason the Eagles were so good on fourth down early in the season. For example, remember that 5-for-5 start on fourth down? Three of those came on Wentz passes and another came on a scramble. Only one, a Ryan Mathews one-yard TD run, didn't directly involve the rookie quarterback. Furthermore, that was the only one all season – 12 of their 13 total successful conversions involved Wentz (10 passing, 2 rushing).

When you look at their season splits on fourth down, you begin to realize that the Eagles threw the ball far more often than they ran it on fourth down.

This season, the Eagles are poised to improve those numbers both on the ground and through the air.

Not only is Wentz a year older with a full NFL season under his belt, but so is his coach. And hopefully he learned a few lessons in 2016 – because when it comes to taking issue with Pederson's penchant for gambling, the fault was often found more in the specific play he called (rather than the decision to go for it).

In addition, Wentz has several new weapons that should help them on fourth down. If the Eagles continue to keep the ball in their QBs hands in those situations – they did so more than 70 percent of the time last season – they have free agent acquisitions Alshon Jeffery and Torrey Smith.

But where they should see the biggest improvement this season is when they decide to keep it on the ground.

As previously mentioned, Mathews was the only Eagles running back to successfully convert a fourth and short ... and that was in Week 2. Mathews came up short on his only other attempt. Darren Sproles was 0-for-1, as was Nelson Agholor.

This time around, they'll have LeGarrette Blount, who was 4-for-6 last season running the ball on fourth down. In his career, he's carried the ball 183 times with his team needing three or fewer yards for a first down. He's converted 100 of them (54.6 pct.).

And when the pressure is on, Blount's numbers have remained nearly identical. In third/fourth down and short situations (fewer than three yards), he's converted 35 of 66 attempts (53.0 pct.)

That certainly bodes well for Pederson and the Eagles.