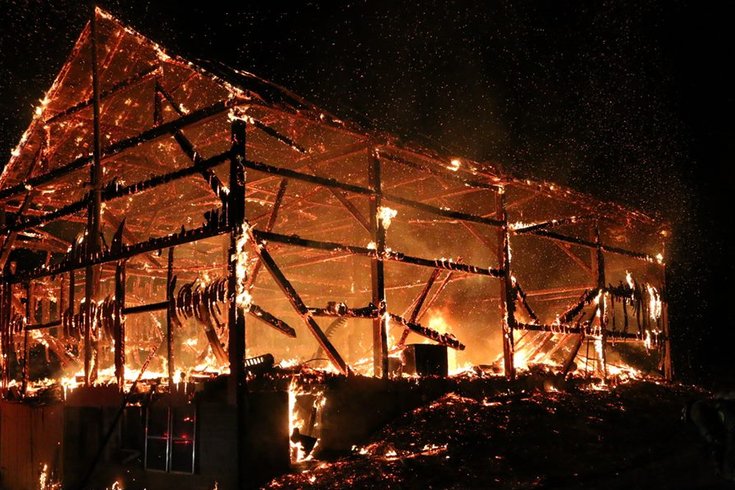 This photo from the Fleetwood Fire Company shows a barn in Maxatawny Township engulfed in flames on Saturday, Jan. 2. Firefighter Cody Weidner, 19, has been charged with arson in relation to his alleged involvement in this fire as well as two other blazes.

A young firefighter has been charged for his role in three separate fires in Berks County that plagued the community and local law enforcement, authorities announced Sunday.

Police say that 19-year-old Cody Weidner of Fleetwood has been taken into custody and is currently awaiting preliminary arraignment on 13 counts of arson-related charges.

Weidner was a probationary firefighter with the Fleetwood Fire Company, according to Chief John Manmiller.

Manmiller released a statement on the company's Facebook page Sunday. He said Weidner's arrest resulted from a joint investigation with police into a number of suspicious fires that have occurred over the past few months.

"The culmination of the investigation has turned out as no fire department would ever wish it to turn out, but as many arson cases do throughout the country, it appears that it could be fire department member, Cody Wiedner," Manmiller said.

The statement says that there are other fires still under investigation by the department.

"Buildings can be rebuilt. Our concern is with the safety of our residents. We are thankful no one was injured," said Manmiller.

According to WFMZ, the three fires that Weidner was allegedly involved in span from this summer to the day after New Year's Day:

The Fleetwood Fire Company posted photos of the most recent blaze that overtook a barn in Maxatany Township. Pictures show the building engulfed in flames.

WFMZ reports that anyone with additional information is asked to call the Fleetwood Police Department at 610-944-7011 or call Crime Alert Berks County at 877-373-9913.