3 players who make sense for the Eagles at the trade deadline, 4.0 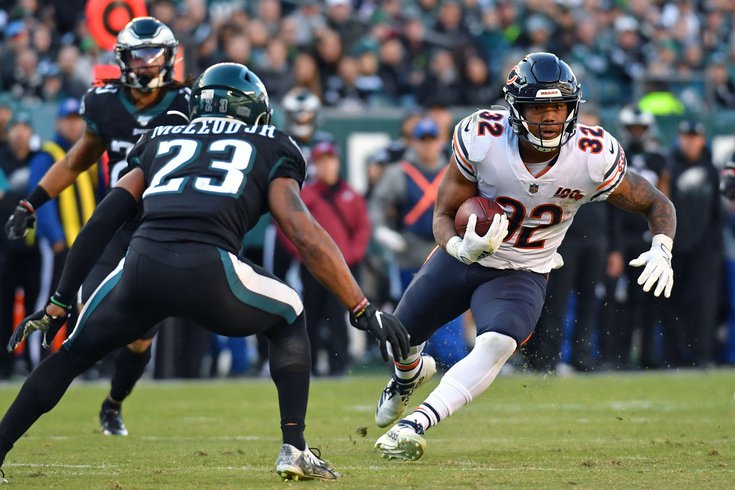 David Montgomery and Rodney McLeod would both make sense for the Eagles at the trade deadline.

If you hadn't noticed after the first six games of the 2022 regular season, the Philadelphia Eagles are good. Expect Howie Roseman to try to make them even better at the trade deadline.

We suggested three other players a few weeks ago, and also rounded up all of Howie Roseman's trade deadline deals since he reassumed his general manager position in 2016, if you're interested in that. We came up with three more players after that, and then three more players after that. As long as y'all are clicking, I'm going to continue to milk this trade deadline for all it's worth.

Montgomery's appeal to the Eagles should be pretty straightforward. He is a tough between-the-tackles runner in the same mold of Jordan Howard, but with more speed and pass-catching ability, and less mileage.

Montgomery's stats are not particularly impressive:

However, it should be noted that he has played behind a horrid Bears offensive line since he came into the league. There's little doubt that he would find more success behind the Eagles' stellar run-blocking line.

Montgomery would give the Eagles a power complement to Miles Sanders who can help close games in the fourth quarter. His trade out of Chicago would also free up more carries for second-year up-and-comer Khalil Herbert. A reasonable cost would be something in the ballpark of a fifth-round pick for a player in the final year of his rookie contract.

On a side note, it's hilarious to me that a player worth a Day 3 pick would make the NFL's Top 100 list over Lane Johnson.

King is a versatile defensive back who can play outside CB, slot CB, safety, and big nickel. He is also an experienced punt returner (74 career punt returns) who has averaged 9.0 yards per return over his career. You can see his intelligence in the video below (you'll have to click "Watch on YouTube" to see it):

In the regular defense, King's most natural position is probably in the slot, which was also true of Chauncey Gardner-Johnson when the team traded for him just before the start of the regular season, before they turned him into a full-time safety. The biggest concern area that King would solve would be at the No. 3 safety spot, should Gardner-Johnson or Marcus Epps go down.

But this is a player who would be more than just safety depth. He would also likely become the top backup at outside corner and slot corner, even if Zech McPhearson and Josiah Scott have held their own at each respective spot.

The challenge in trading for a player like King would be finding a role for him even when everyone is healthy, because he's a good player and likely wouldn't be thrilled wasting away on the bench. If they can carve out a regular role in addition to his Swiss army knife-like versatility, King would be an intriguing piece to add to the defense and special teams on a Super Bowl-contending team.

Yes, this is boring, but McLeod would be a more dependable backup safety than K'Von Wallace, and he already knows the defense. He is also super cheap, as he has a base salary of $1,120,000.

Rookie third-round pick Nick Cross beat out McLeod for the starting job out of training camp, but McLeod became the starter Week 3 after the team felt that McLeod offered better communication skills on the back end. The Colts should be aware that they are not Super Bowl contenders after benching Matt Ryan in favor of Sam Ehlinger. They may as well get Cross more playing time at safety, and salvage some sort of small return for McLeod.