Tickets are on sale now for the Adjacent Festival, which will be held on the beach May 27-28 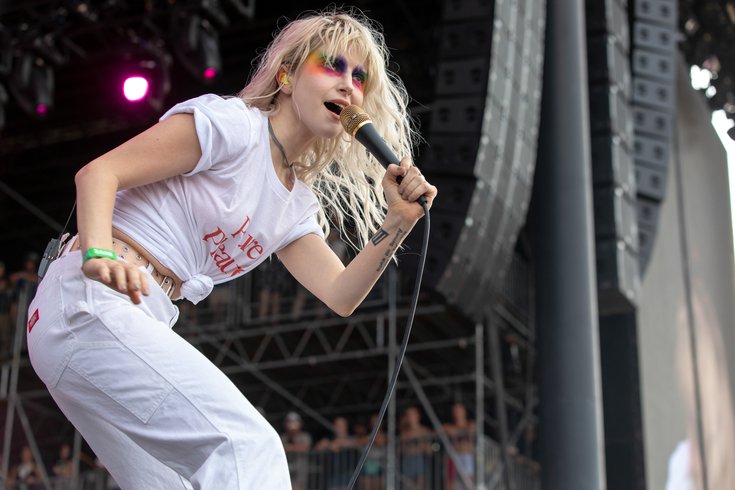 A new rock music festival is making its debut on the Atlantic City beach over Memorial Day Weekend 2023. Tickets are now on sale for the Adjacent Festival, which features performances by nostalgia-inducing headliners Blink-182 and Paramore (lead singer Hayley Williams pictured above).

Rock fans can secure their Memorial Day Weekend plans a bit early thanks to the announcement of a new music festival hitting the Jersey Shore in May.

The Adjacent Festival is making its debut on the Atlantic City beach on Saturday, May 27, and Sunday, May 28, 2023. The event features performances by nostalgia-inducing headliners Blink-182 and Paramore, as well as a host of other emo/punk bands of the '90s, 2000s and today.

MORE: Firefly Music Festival canceled for next year, but will return to Delaware in 2024

Last week, Adjacent released its full lineup of over 40 acts set to take over the beach.

Originally formed in 1992, Blink-182 has given fans plenty of excitement recently, announcing an upcoming album, tour and the return of guitarist/vocalist Tom DeLonge to join bassist/vocalist Mark Hoppus and drummer Travis Barker. They released a new single, "EDGING," on Oct. 14, and headlined the sold-out When We Were Young Festival in Las Vegas last month.

Paramore, the band featuring lead vocalist Hayley Williams, guitarist Taylor York and drummer Zac Farro, is currently on a world tour and released the single "This Is Why" in September. Paramore is also joining Taylor Swift on her 2023 "Eras" tour.

Along with the headliners, other fan-favorite acts will include Turnstile, Coheed and Cambria, Jimmy Eat World, Wheatus, Idles and Beach Bunny. Fans can see some local acts at the festival as well, like Philadelphia-based indie pop band Japanese Breakfast and New Jersey native bands Bleachers, The Front Bottoms and Thursday.

The lineup for each day of the festival has not yet been revealed, but Paramore's website notes they will play on Saturday, May 27. The tour schedule of Blink-182 places them in Hershey on May 27, so it's likely they will perform in Atlantic City on Sunday, May 28.

Tickets are now on sale, with two-day passes starting at $359 for general admission. Higher tier packages are available as well, including VIP passes starting at $599 and VIP boardwalk passes starting at $799. Currently, the most expensive package is the Super VIP package for $1,199, which offers guests access to special viewing areas, private restrooms, early merchandise opportunities and dedicated host staff. Ticket prices are subject to fluctuate, and one-day passes are not available.

The festival also offers payment plans, which would allow attendees to make multiple partial payments for their passes rather than pay all at once.

Payment plans are now available for as low as $19.99 down (+fees) - snag yours today & meet us on Memorial Day weekend!

Those looking to stay overnight in Atlantic City can take advantage of travel packages offered by nearby hotels such as Ocean Casino Resort, Caesars Hotel & Casino, Tropicana Hotel and Showboat Hotel. There are also many parking garages that will be available during the event.

During the festival, concessions, including alcohol will be available for purchase and water stations will be on hand for guests to stay hydrated. Lifeguards will be on duty inside the concert site, so swimming is permitted for attendees until just before dark, based on the lifeguards' guidance. Boats will not be allowed to anchor off shore near the festival, which will be "highly patrolled" by local law enforcement.

Atlantic City is no stranger to hosting beach concerts of this caliber. In August, the inaugural TidalWave Festival had country fans flocking to the beach to watch performances by stars like Morgan Wallen, Luke Bryan and Dierks Bentley.