A new panel will be added to the quilt in Philly 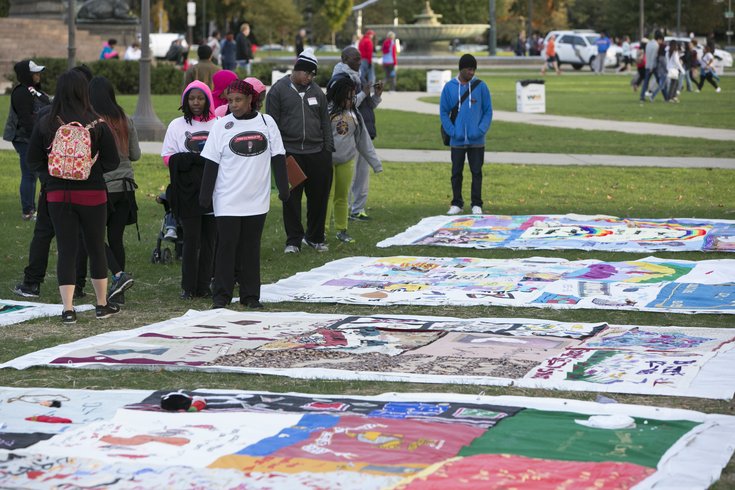 The AIDS Memorial Quilt, which includes more than 20 panels, memorializes people who died of AIDS.

People around the world will pause Sunday to remember the loved ones they lost to AIDS as part of World AIDS Day, an event designed to raise awareness of a disease that has killed more than 32 million people worldwide.

In Philadelphia, the AIDS Fund is displaying more than 20 blocks of the AIDS Memorial Quilt on Sunday between 11 a.m. and 3 p.m. in the Teller Auditorium at the Congregation Rodeph Shalom, 615 N. Broad Street. The event is free.

The AIDS Memorial Quilt memorializes people who have died of AIDS. According to the U.S. Centers for Disease Control and Prevention, there were 1.8 million new cases of HIV in 2017 in the United States.

In Philadelphia, there are approximately 20,000 people living with HIV, though annual diagnoses dropped by 14% last year. Damage caused by this virus can lead to the development of AIDS.

The names from the quilt will be read aloud during the AIDS Fund event and a new panel will be added. AIDS service providers also will be available to answer questions about their services.

The AIDS Memorial Quilt is preserved and cared for by the NAMES Project Foundation, an international nongovernmental organization. The AIDS Fund – the Philadelphia affiliate of the foundation – provides both education to increase public awareness of HIV/AIDS issues and emergency financial assistance to people living with HIV in the Greater Philadelphia area.

In conjunction with AmeriHealth Caritas, they are asking people to post a photo of themselves wearing red with a sign or caption about World AIDS Day on social media. They ask people use the hashtag #WorldAIDSDay and tag @ActionWellness.

Since 1991, Action Wellness has recognized people who have been instrumental in helping people living with HIV and other chronic illnesses. On Wednesday, the group will honor NBC10's Vai Sikahema, Yards Brewery's Tom Keho and Terry Burch McNally, owner of the former London Grill.

On Friday, Action Wellness will be presented the Pioneer Award from the Community Advisory Board of the Center for AIDS Research at the University of Pennsylvania.

World AIDS Day was established in 1988 as the first globally recognized health day. Worldwide, there are about 37.9 million people living with HIV.

In anticipation of World AIDS Day, the World Health Organization released new recommendations on HIV testing services. The recommendations are designed to help diagnose people who do not realize they have HIV, so that they can get crucial lifesaving treatment.

"The face of the HIV epidemic has changed dramatically over the past decade," Dr. Tedros Adhanom Ghebreyesus said. "More people are receiving treatment than ever before, but too many are still not getting the help they need because they have not been diagnosed. WHO's new HIV testing guidelines aim to dramatically change this."

The new guidelines encourage countries to:

• Offer HIV self-testing for those at high risk, but who are less likely to go to a clinic to be tested.

• Reduce mother-to-child transmission of both HIV and syphilis by using HIV/syphilis dual rapid tests as part of antenatal care.