American Girl's 2017 'Girl of the Year' hails from Philly 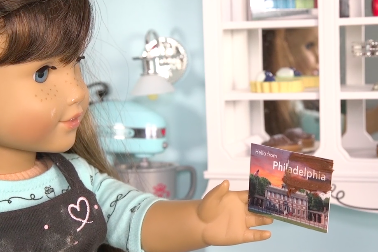 American Girl's "Girl of the Year" is hinted to be from Philadelphia.

American Girl has been dropping clues about the identity of its 2017 "Girl of the Year" character debuting on New Year’s Day, and there's one thing we know: She’s from the City of Brotherly Love.

Based on a series of stop-motion video clues released over the last few days as part of the countdown to her debut, the 2017 character runs a sandwich shop in Philadelphia and is also a dancer and a poet, which makes sense given the city's rich arts and culture.

A postcard appearing as a clue in the video clip on its website shows the Art Museum of Philadelphia.

Two more hints are expected to drop on the American Girl website over the next two days, and on Thursday, Good Morning America will air an exclusive first look.