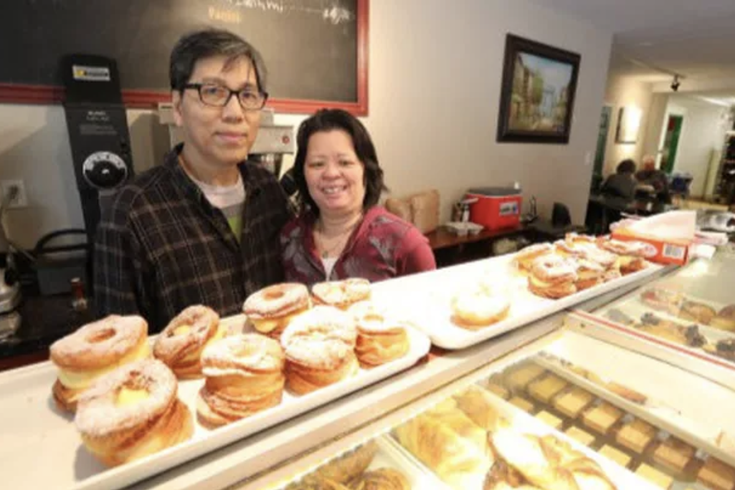 Andre Chin and Amanda Eap, owners of Artisan Boulanger Patissier in South Philadelphia, are each battling cancer and have temporarily closed the beloved bakery and sandwich shop on Mifflin Street. A GoFundMe campaign has been set up to support them in their treatment.

Artisan Boulanger Patissier has been a staple in South Philadelphia for nearly two decades, offering a worldly take on pastries, breads and sandwiches that have earned its owners multiple James Beard Award nominations over the years.

The beloved shop at 1218 Mifflin St., just off East Passyunk Avenue, temporarily closed three weeks ago while its owners, Andre Chin and Amanda Eap, who are married, each seek cancer treatment.

Daniel Weber, a longtime Artisan Boulangerie customer and friend, told the couple he'd like to create a GoFundMe campaign to help them through their difficult times.

"These are just the nicest people," said Weber, a nurse. "For anyone, they always give the most pleasant experience. I bring my kids there and they treat them like royalty. On top of being great people, everything from their breakfast to the croissants to bahn mi is just amazing. I feel they've touched a lot of people in the community."

At the GoFundMe page, Weber explained in greater detail what Eap and Chin are up against:

Unfortunately, they are now facing some really challenging health circumstances. Amanda has been diagnosed with breast cancer and although she is doing well, she is looking toward a long treatment course that includes another surgery and ongoing medical care. At the same time, Andre has experienced a relapse of his prostate cancer, which is now metastatic and his prognosis is uncertain.

Would like to rally all of us that Amanda and Andre have taken care of for so long by returning the favor and helping take care of them. Anything that you can donate will certainly help the family and ease the financial burden of impending medical bills, particularly while they won't be able to be baking again for a little while.

In less than 24 hours, the GoFundMe campaign — the first Weber has created — already has raised more than $29,000 as word spread online.

"It speaks for itself how many people have been touched," Weber said.

Natives of Cambodia, Chin and Eap met in Philadelphia as Chin was looking to settle in the United States. Chin had trained to become a baker in France and worked at a bakery in Paris prior to opening Artisan Boulanger with Eap.

The business originally was located several blocks north at 1646 South 12th St., but the couple moved to the Mifflin Street location in 2013 and have continued to lead one of the city's most unique restaurants.