Trying to avoid germs is pretty much useless

All that hand sanitizing, Lysol spraying and toilet seat covering you do isn't really doing you any favors.

Face it, our bodies are chock full of thousands of different species of bacteria. About 3 pounds of our body weight is accounted for by bacteria alone.

Below are some common things you probably do to avoid germs and just how effective (or ineffective) they actually are, from BusinessInsider.

Toilet seat liners can often be found in the stalls of public bathrooms. It was at one time believed that toilet seats could spread infectious diseases, but we now know this is not the case. Since viruses such as HIV and herpes don't survive well outside the human body, by the time you sit down on a public toilet seat, you should be in the clear. Other common bacteria could be lurking on the surface of the seat, but as long as you wash your hands when you're done, there's not much to worry about.

“@FemaleStruggIes: me whenever I use public bathrooms pic.twitter.com/hKrmA0oI6n” @ me true life: I'm a germaphobe

While sanitizer can be a good solution when you don't have access to soap and water, it won't kill all germs. The CDC recommends only using sanitizer solutions with 60 percent or more alcohol. Use soap and water when you have the option.

when your mother is a germaphobe and starts to question how much you sanitize, then goes out and buys you sanitizer pic.twitter.com/93aVgHIJdh

Here's a tip for all those germaphobic parents out there. There's evidence to suggest that exposure to everyday pathogens might actually be good for you, especially if you get exposed at a young age.

At a recent event at the American Museum of Natural History, Weill Cornell Medical College geneticist Chris Mason said he lets his daughter ride the subway all the time.

"I would advise any new parent to roll their child on the floor of the New York subway," said Mason.

“@Jessie_1091: How to stay away from germs on the subway pic.twitter.com/PxLmvYlE4E” I'm a genius💁

So, spray all you want, germaphobes. It really won't make much of a difference. 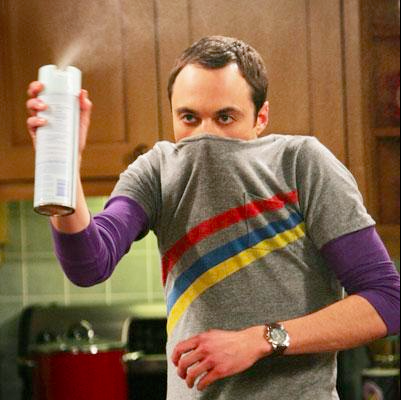