The Chester County native has been feuding with Jeff Tremaine, Johnny Knoxville over the upcoming movie 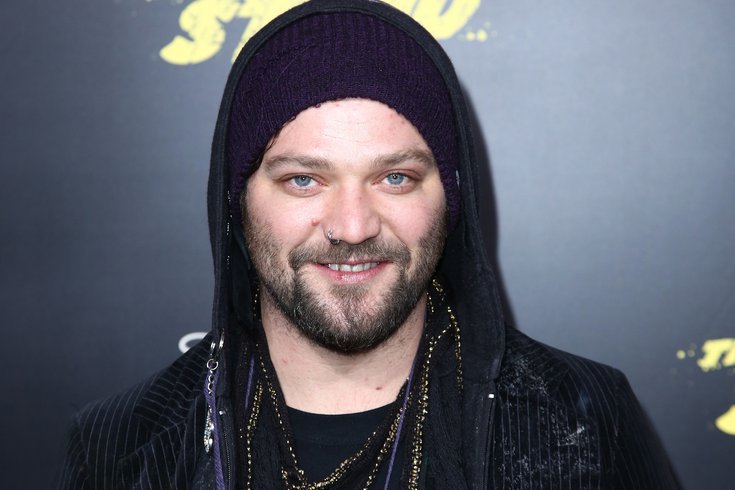 Bam Margera, pictured above in a file photo from 2013, was fired from the upcoming 'Jackass 4' movie earlier this year. The 41-year-old ex-MTV star has publicly battled substance abuse, mental health and legal issues for years.

An ongoing dispute between Bam Margera and the team behind the upcoming "Jackass 4" movie has reportedly spilled into Los Angeles County Superior Court, where producer Jeff Tremaine has filed paperwork seeking a civil harassment prevention order.

Margera, 41, has undergone a public battle with mental health and addiction struggles in recent years, including several arrests and stints in rehab.

In February, the former MTV star and skateboarding icon lashed out against Tremaine and others involved in the long-delayed "Jackass" project, claiming he was fired from the film for failing to meet contractual requirements from Paramount Pictures. Margera had claimed he was required to submit to routine drug testing, take breathalyzer tests, see a psychologist and take multiple prescribed medications. He said he had been diagnosed with bipolar disorder.

The restraining order is intended to protect Tremaine from violence, stalking, harassment and threats of violence, according to Page Six. No court date has been set and the details of the case are confidential.

The release date for "Jackass 4," starring Johnny Knoxville and other original cast members of the MTV series, has been pushed back multiple times in the last year due to complications arising from the coronavirus pandemic. It's tentatively set for a theatrical release on Oct. 22.

In videos posted on social media earlier this year and subsequent candid interviews with TMZ, Margera complained that he was shut out of the production despite writing numerous ideas for the movie. He urged fans to boycott the movie, asked for donations on Venmo and criticized Tremaine and Knoxville for holding him to strict sobriety and treatment requirements that he likened to "torture."

"What’s the point of a $5 million contract that I have to walk on eggshells and jump through your hoops — which is already impossible — to obey if I’m dead?" Margera mused to TMZ in April. "What the f*** is the point of having the money if I’m not here anymore because I was going to die of a pill overdose or suicidal thoughts?"

Margera, who has a home in Pocopson, which is just outside of West Chester, said in previous videos that he had been spending most of his time in Pennsylvania during the making of "Jackass 4." He relocated earlier this year to Oceanside, Calif., with his wife, Nikki Boyd. The couple have a 3-year-old son. Margera posted photos with his family in recent days.

Fellow "Jackass" star Steve-O, who also struggled with drug addiction and has been sober for nearly a decade, recently came to the defense of Knoxville and Tremaine in response to an angry post from Margera.

"Bam — the two people you're saying wronged you (Knoxville and Tremaine) are the same two people who organized the intervention which saved my life," Steve-O said. "Everyone bent over backwards to get you in the movie, and all you had to do was not get loaded. You've continued to get loaded, it's that simple. We all love you every bit as much as we all say we do, but nobody who really loves you can enable or encourage you to stay sick."

Knoxville became emotional about the subject during an interview with GQ published on Tuesday, carefully avoiding a public back-and-forth with Margera.

"We want Bam to be happy and healthy and get the help he needs," Knoxville said. "We tried to push that along. I think that’s all I really want to say about it."

Margera has traced many of his struggles with drugs and alcohol to the death of his close friend and former "Jackass" castmate, Ryan Dunn. Dunn was 34 when he was killed in a high-speed crash while driving his Porsche drunk on the Route 322 bypass in West Goshen, Chester County, in June 2011. Dunn's alcohol level was reportedly twice the legal limit at the time of the crash.

Knoxville told GQ Dunn's death was "heartbreaking," but said he doesn't feel the extreme lifestyle around the "Jackass" franchise is to blame for the struggles of some the show's cast.

"I think each of us was responsible for his own actions," Knoxville told GQ. "And when someone’s struggling, everyone tries to help that person. And at the end of the day, that person has to want help. Sometimes they don’t. Yet."