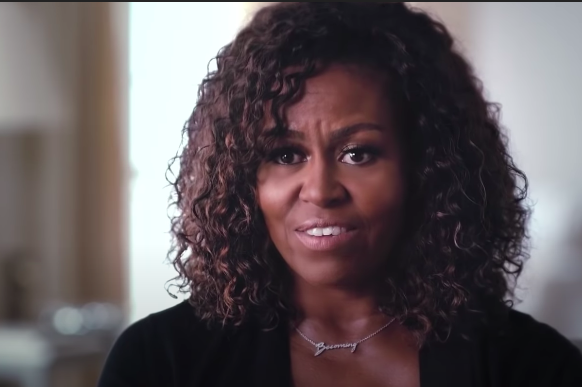 Netflix announced the Michelle Obama documentary 'Becoming' will premiere on the streaming platform on May 6. The film chronicles the former First Lady's adventures on the book tour for her best-selling memoir.

The documentary that follows Michelle Obama on her "Becoming" book tour comes to Netflix in May.

Also titled "Becoming," it is directed by Nadia Hallgreen and premieres on the streaming platform on Wednesday, May 6. It chronicles Obama's journey from city to city and the interactions she had along the way.

Netflix released a clip on Monday that shows a community event at the African-American History Museum in Philadelphia. The former first lady is sitting in a group surrounded by young women and discussing how her life has changed since leaving the White House.

"I crave some longer experiences with young people through the community events," she says in the clip. "The tour could do a great job of giving me a little taste of it."

"Becoming" was published in 2018 and became the best-selling book that year — and eventually the best-selling memoir of all time. During her book tour from 2018 to 2019, Obama traveled to more than 30 cities, including a stop at the Wells Fargo Center. Her book was so popular Roots' drummer Questlove even crafted a three-part playlist inspired by the her autobiography.

"Those months I spent traveling — meeting and connecting with people in cities across the globe — drove home the idea that what we share in common is deep and real and can't be messed with," Obama said in a statement. "I treasure the memories and that sense of connection now more than ever, as we struggle together to weather this pandemic, as we care for our loved ones, tend to our communities, and try to keep up with work and school while coping with huge amounts of loss, confusion, and uncertainty."

The documentary was produced by  Barack and Michelle Obama's Higher Ground Productions. The production company signed a multiyear deal with Netflix in 2018. Higher Ground's first release, a documentary about a Chinese billionaire who opens a glass factory in Ohio titled "American Factory," won an Academy Award this year.