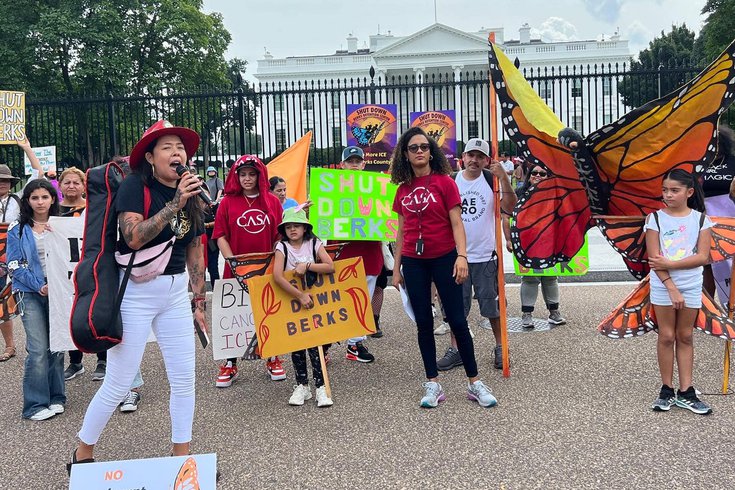 ICE is ending its contract with Berks County to operate the migrant detention center in Leesport, which has been decried by activists for a decade. The facility will close Jan. 31. Above, members of Make the Road Pennsylvania, a group that has called for the facility to be shuttered, protest outside the White House in August 2022.

The Berks County migrant detention center, long decried by activists and local politicians as "horrifying," "inhumane" and "essentially a jail," will close next month.

The federal government informed Berks County officials this week that it would be ending its contract with the Berks County Residential Center, a 96-bed, women-only detention center in Leesport, located about 75 miles northwest of Philadelphia. The ICE contract is set to expire on Jan. 31.

Immigrant advocates cheered the news, characterizing the closure as a hard-won victory.

"Closing the Detention Center here in Berks County finally puts an end to the years of trauma inflicted against immigrants in our communities," Celine Schrier, an organizer with Berks Stands Up, said in a statement. "It couldn’t have happened without the direct action and leadership of those held there and in other centers around America. Now we must ensure that anyone held is released to their family and it falls to us in Berks to ensure the center is transformed into a true public service that meets our community needs."

Stephanie Weaver, a public relations officer for Berks County, said the county could not comment on how many women are currently being detained at the center. ICE told PhillyVoice that about 40 women are currently housed at the site, and their cases are expected to be adjudicated before the contract with Berks County Residential Center expires. If their cases are not resolved at that time, ICE continued, "the detainees will be transferred to other facilities in a safe and humane manner."

Originally opened in 2001, the Berks County Residential Center has been a site of protest and scrutiny for nearly a decade. Activist groups including the Shut Down Berks Coalition and Make the Road Pennsylvania have mounted protests over the years in Leesport, Philadelphia and outside the White House, calling on federal officials to cut ties. Former Pennsylvania Auditor General Eugene DePasquale joined the chorus in 2019, likening the center to a prison.

The facility held immigrant families until February 2021, when the Biden administration released the remaining detainees to sponsors as they awaited court hearings for their asylum petitions. It sat dormant for nearly a year, reopening in early 2022 as center for migrant women.

The restructuring plans became public knowledge shortly after the 2021 closing, prompting over 50 Pennsylvania politicians to ask President Joe Biden and Vice President Kamala Harris to terminate the ICE contract with Berks County Residential Center. An additional letter signed by U.S. Reps. Madeleine Dean, Dwight Evans, Brendan Boyle and Mary Gay Scanlon followed. But the contract continued, even as pressure mounted to end it, until the announcement this week.

Placing women seeking asylum into detention centers is unconscionable, especially when there is a track record of harm, abuse, and sexual violence.⁰⁰That is why I led a letter with my PA colleagues to urge @DHS to terminate the ICE contract at Berks County Residential Center. pic.twitter.com/vTndajs3Zp

"This victory feels like a dream," Lilliana Perez, who was detained at the center for a month, said in a statement. "I feel happy, content and free.

"My sick daughter was never cared for or given the medicine she needed while I was in prison. The detention center created a lot of suffering, and I am overjoyed to see it finally close."

In 2016, the U.S. Office of the Inspector General found that most families at the facility were being held for at least six months, in apparent violation of federal law, which dictates that immigrant children cannot be held more than 20 days. That same year, ICE employee Daniel Sharkey was found guilty of sexually assaulting a 19-year-old detainee at the center. The woman later received a $75,000 settlement from Berks County.

It is unclear what will happen to the roughly 60 workers employed at the center, but Berks County said in its statement that it is "committed to do everything possible to support these employees during this transition." Previous proposals for the center floated in 2019 include a mental health facility for convicted criminals, a juvenile center for kids struggling with substance abuse or mental illness and Department of Agriculture facility aimed at improving technology.

Immigration advocates are confident the county can find a solution that saves jobs.

"Today's victory is a reflection of what happens when local communities organize, fight and win the things they need," Mike Ishli, an organizer with Tsuru for Solidarity, said in a statement. "Real economic opportunities for rural, working class communities that do not rely on incarceration, that open futures for people."

This story has been updated with information from ICE.