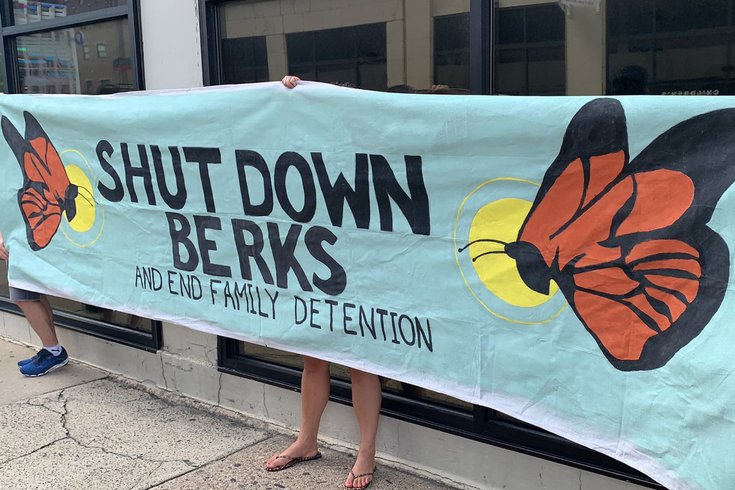 The Berks County Residential Center has reopened as a women-only detention center for asylum seekers. Above, protesters in Philadelphia urge the Biden administration to end the ICE contract with Berks County.

The Berks County Residential Center, a 96-bed site that opened in 2001, had not housed any immigrants since the Biden administration released its final families to sponsors while they awaited court hearings on their asylum cases in February 2021.

"From what we understand, the majority of the women are recent border entrants, and are a mix of Haitian, Roma and Spanish-speaking women," Jackie Kline, an immigration attorney for the Aldea – The People's Justice Center, told WITF.

The pro-bono legal clinic began receiving calls from women who had been transferred to the facility in late January. There are up to 65 women currently detained there, Kline said.

In response, 50 Pennsylvania elected officials — including several Philadelphia City Councilmembers and state lawmakers from Southeastern Pennsylvania — penned a letter urging the Biden administration to terminate the Immigration and Customs Enforcement contract to run the detention center.

"This is the first time in many years that the BCRC has stood without detained immigrant families within its walls," the officials wrote in July. "We believe this decision is only the first step towards ending family detention once and for all in this country. Incarcerating immigrants – whether they be families, children, or individual adults — is cruel, inhumane, abusive, unnecessary, and immoral. It is a violation not only of American civil liberties but of international human rights."

In September, the Berks County commissioners agreed to amend the county's contract with ICE to repurpose the facility into a women-only detention center for asylum seekers. All public comments at the meeting were in opposition to the plan.

Over 50,000 people wrote to @SecMayorkas, demanding the permanent closure of the Berks immigrant prison. And yet, today we learned that detentions have resumed — an absolute moral failure by our country.

Take action and demand the end of this ICE contract once and for all⬇️ https://t.co/45uQk42cyt

The amended contract includes a stipulation for a maximum of 100 beds. It brought more than $1 million to Berks County, about $55,000 less than the amount it had received when it detained families, WITF previously reported.

In January 2020, a Honduran woman who was sexually assaulted by a facility employee reached a $75,000 settlement with Berks County. The 19-year-old mother was detained there with her child when she was assaulted in 2014. Two years later, ICE employee Daniel Sharkey was convicted of institutional sexual assault and subsequently sentenced to four months in prison – less time than the victim had been detained.

Human rights groups have raised concerns about sexual abuse in immigrant detention centers for years. A 2018 report found that 1,224 people had reported sexual assault in an ICE facility.

At least 19 women at the Irwin County Detention Center in Georgia accused a doctor of performing "medically unnecessary" procedures on them while they were detained, including hysterectomies. The facility was closed in May 2021 amid a federal probe into the allegations.

The Berks County Residential Facility was one of just three facilities in the United States that detained immigrant families. The other two, both in Texas, are being transformed into "rapid processing hubs" that will only house immigrants for up to 72 hours.

The Biden administration has expanded the ICE alternatives to detention program, which includes GPS tracking devices and other technology for people not being detained. There are currently 164,391 people being monitored using that technology, according to data from TRAC at Syracuse University.