Bernie Sanders slow jams with Jimmy Fallon and The Roots 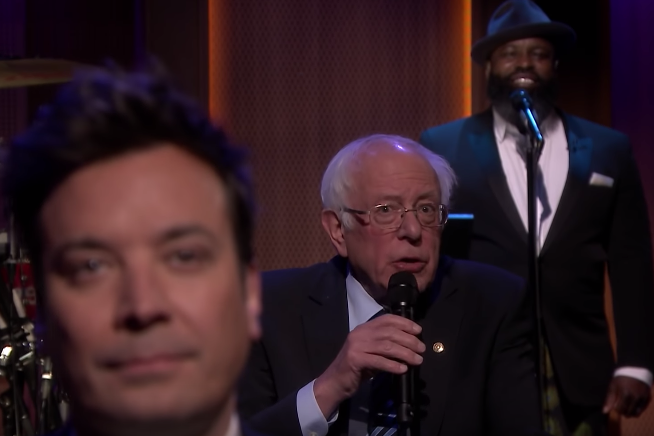 Bernie Sanders joins Jimmy Fallon and The Roots to slow jam the news on 'The Tonight Show.'

Sen. Bernie Sanders went on "The Tonight Show starring Jimmy Fallon" on Tuesday to slow jam the news with the late-night host and The Roots.

Sanders, a frontrunner for the Democratic presidential nomination, took to the stage at Studio 6-B, just as fellow candidates, Kamala Harris and Pete Buttigieg previously had. The Vermont senator didn't hold back his political thoughts, each of his statements echoed by the cool, deep tones of Fallon's bedroom voice and all of it backed by a mellow tune "Tonight Show" house band The Roots.

To which Fallon relied, “Oh yeah. Bernie Sanders is lookin’ out for your bottom half. He knows it’s been neglected for too long, now he wants to pay it some extra-special attention. He’s sick and tired of having just a few people on top, that’s why Bernie’s here to spread the love."

Sanders also slow jammed about medicare for all and getting big money out of politics. He mentioned doesn't have a super PAC like some of his fellow candidates and took a firm stance against corporations' involvement in politics..

"He might not have a super PAC, but he's packin' something super," Fallon added.

Black Thought from The Roots chimed in, “He’s bringin’ Medicare to all consumers, and if you can’t dig that then ... Okay, boomer.”