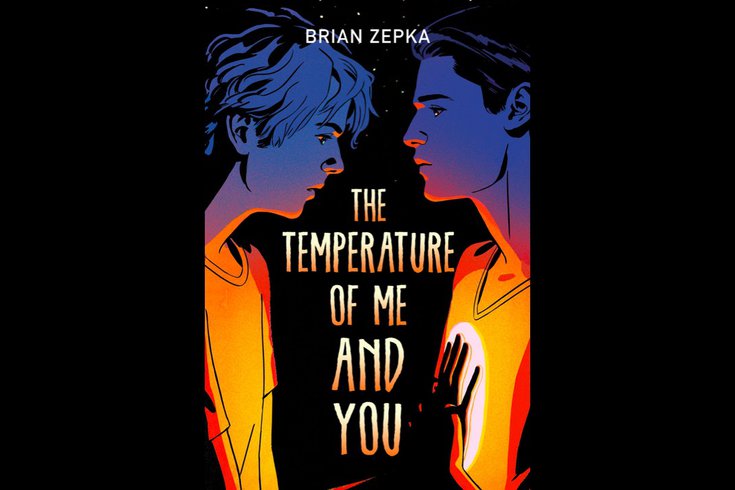 Brian Zepka's debut young adult novel, 'The Temperature of Me and You,' tells the story of Dylan Highmark, a high school student in the Philadelphia suburbs who discovers that the boy he's crushing on has a body temperature of 110 degrees.

At a quiet Dairy Queen in the fictionalized Philadelphia suburbs, Dylan Highmark is working a regular shift when Jordan Ator walks in. Dylan is clearly crushing on the new boy in town, but he burns his hand when he touches him, quickly discovering that Jordan's body temperature is a whopping 110 degrees. As he grows closer to Jordan, Dylan discovers that his own body temperature is rising, too.

That is the premise of West Chester native Brian Zepka's debut young adult novel, "The Temperature of Me and You." The book, which was published Jan. 25, is a romance novel centered in science fiction. It follows Dylan as he grapples with his life and his body changing as he experiences his first love.

Less than one week after its release, The Hollywood Reporter reported that "The Temperature of Me and You" would be adapted as a television series on Disney+. The series will feature Dylan and Jordan as Disney's first openly LGBTQ lead characters.

Zepka wrote Dylan's coming out story — a foundational aspect of LGBTQ storytelling — as a flashback. In it, both of his parents are immediately supportive, and almost too excited.

They both celebrate their son's coming out by baking him a rainbow cake, wearing buttons and pins in support, and overexerting themselves to make Dylan feel as validated and supported in his identity as he can be.

Though Dylan eventually assures them that they can tone it down, it sets up the rest of the story without centering on a gay character who is entirely focused on his identity.

Zepka said he wrote the coming out story in this way so that Dylan could be openly gay and happy with his friends and family, without having a traumatic story to go through.

"Dylan is this anxious, insecure kid and he's still very much figuring himself out, and how I designed it was that I wanted his coming out to be his source of strength," Zepka said. "He's feeling like he's missing out on a lot in life, he sees his friends and his sister accomplishing all these different things and he hasn't really done that, so he feels really behind. I used it as his launching pad into new things."

Thank you to everyone at @DisneyBooks for shaping this book into the best version it could be, spreading the word, and making my author dreams come true! 🌟

Philly and its suburbs are featured prominently throughout the novel. Zepka said that this was intentional as he was planning the book. He focused on keeping it "grounded" as a romance that takes place in the suburbs. Some of the references are easy to spot.

Dylan works at a Dairy Queen in West Chester. He and his two best friends take the train into the city for "Second Saturdays," a spin on First Fridays, when art galleries and shops stay open late. There is a fictionalized version of what could be John W. Hallahan Catholic High School, though the school is co-ed. Dylan's father goes on a Wawa run to grab hoagies, oblivious to his teenage son's antics in the next room.

The novel is Zepka's YA debut, though he has written two other books. Previously, the author wrote a more dystopian young adult novel, which featured darker themes and heavier concepts. When it didn't get a green light, Zepka decided to write a simpler story about first love, making it entertaining for people to escape into.

Though the book has not even been out for a full month, Zepka has received a lot of positive feedback. In particular, the book's targeted teenage audience has responded with praise.

"I think people are excited that there's this YA sci-fi queer story," Zepka said. "I've gotten a lot of great messages from queer teens saying that they felt super represented in the story, or they've been inspired, and they've been given confidence in their own coming out story."

With the Disney adaptation, Zepka's characters will join the Disney cinematic canon as its first openly LGBTQ lead characters. The film studio has had a complicated history with representation of queer characters in its nearly 100-year history, only recently beginning to expand the identities of its characters.

In 2017, the studio announced the live-action Beauty and the Beast adaptation would feature Disney's first "exclusively gay moment" ahead of the film's official release. This sparked controversy among conservative groups, who claimed that fans should boycott the film and the studio when the film was released.

In reality, the "exclusive gay moment" turned out to be just seconds of screentime featuring a dance between Le Fou, portrayed by Josh Gad, and another man.

Later, Officer Specter, a cyclops police officer in "Onward," became the first openly gay character in a Disney animated film. Though she only appears in one scene in the film, the brief mention of her girlfriend caused the film to be banned in several countries.

While Disney has attempted to remain neutral in its representation of queer characters, the adaptation of "The Temperature of Me and You" will showcase two lead characters that are openly gay.

"With any representation on the screen in terms of queer characters, it's just beyond helpful to queer kids growing up to see themselves reflected on the screen," Zepka said. "And when you have big companies, major film studios, places like Hulu and Disney and Marvel and all these different people that back queer characters, it's really validating."

The adaptation was announced as a collaboration between former studio executives Zoe Kent and Foster Driver, and will be written by Alden Derck, who previously was a writer on The CW's musical comedy "Crazy Ex-Girlfriend."