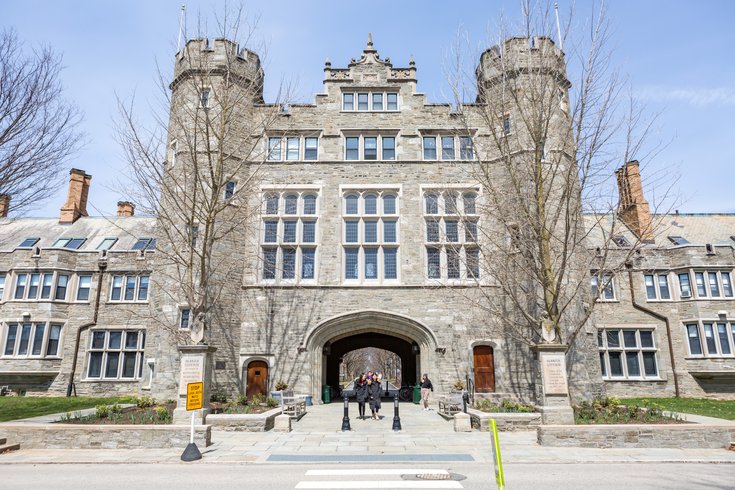 The protests come after the school formally recognized Thomas' prejudices against African-American and Jewish students when she was in office from 1894 to 1922.

After a year-long review, Bryn Mawr announced earlier this year that it would reduce its references to Thomas throughout the campus. The Thomas Library and Thomas Great Hall are now to be referred to as "the Old Library" and "the Great Hall," though Thomas' name is still inscribed.

Ann Logan, chair of the Bryn Mawr board of trustees, wrote a letter to the school community in August explaining the changes and citing examples of Thomas' prejudices.

"[Thomas] blocked the hiring of Jewish faculty and the admission of qualified Jewish students," the letter reads.

"She refused to consider the admission of African-American students, even rescinding admission offers made to qualified African-American students. She denied a Bryn Mawr education and employment to exceptional persons because of their backgrounds. Though these policies were not unique among elite institutions of the time, the Board noted that Thomas’ perspective and actions are antithetical to the College’s value of inclusion."

Students participating in the protest said they would continue to do so peacefully until their requests are met by the Board of Trustees.

Though the school declared a scale down of its references to the former president and dean, those protesting feel more measures should be taken, particularly in regard to the buildings named after Thomas. Students protesting request the board acknowledge and denounce Thomas' racist and anti-Semitic past and formally apologize to students and alumnae.

In a statement, protesters also requested that the Board "provide materials in support for engagement with Thomas' history in research funds and campus markers and historical displays." They also want the board to have a plaque recognizing Thomas' prejudices saying "that they were wrong in her time and wrong now and that they no longer represent the values of the institution."

In her August letter, Logan also wrote that the school will continue to recognize its founding dean and second president.

“The College will recognize ... how this decision reflects our commitment to the mission of the College and the goals of equity and inclusion," Logan wrote.