Mayor Kelly Yaede, for the record, laughed it off as a prank 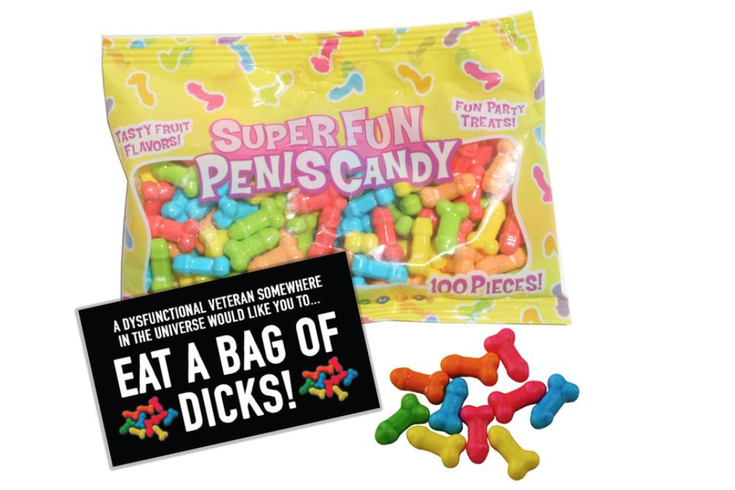 The product in question.

Last week, someone was feeling edgy and decided to send a bag of penis-shaped candies to Kelly A. Yaede, the mayor of Hamilton Township, New Jersey.

Yaede wasn’t in her offices when the package arrived, and when she heard about it, she told NJ.com she laughed about it.

But by the time she was chuckling, her staff had already asked the Hamilton Township Police Department to find out where the package came from.

It turns out the candy came from Dysfunctional Veterans, a group of veterans with a website that sells, among other things, a bag of penis-shaped candies.

Or, as the group so eloquently puts it, a “bag of dicks.”

The bag of candy, which contains 100 multi-colored units, costs $15 and comes with a card that reads, “A dysfunctional veteran somewhere in the universe would like you to… eat a bag of dicks!”

The website includes the disclaimer, “Dysfunctional Veterans does not condone sending this item to harass any person. (Our lawyer makes us say this.)”

And yet, the group’s email suddenly had an email from the police regarding this inappropriate package:

As we can plainly see in the Dysfunctional Veterans Facebook post above, which has been shared nearly 2,000 times, Detective Thomas R. Clugsten of the Hamilton Police Division’s Criminal Investigations Section — the Major Crimes division! — reached out about the candy.

“I would like to speak with a member of your business concerning a prank that was sent from your company to our Mayor in an effort to harass her,” Clugsten’s email read.

This sure seems like a lot of noise over a fairly juvenile prank, right?

Yaede agreed. According to NJ.com, she has since put an end to the investigation.