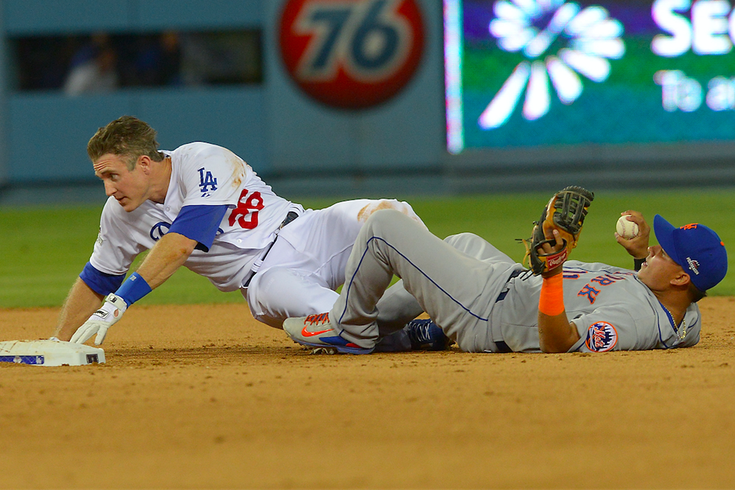 Former Los Angeles Dodgers second baseman Chase Utley and New York Mets shortstop Ruben Tejada on the ground after a play at second base during the seventh inning in game two of the 2015 NLDS at Dodger Stadium.

Utley spent his entire career, on both coasts, destroying the New York Mets in ruthless fashion. His career stats at Citi Field alone have been so eye-popping that a section of the park was named Utley's Corner to acknowledge his ownership of the Mets.

RELATED: Chase Utley had the perfect reaction to missing Phillies-Dodgers for a Kidz Bop concert

It's no surprise Mets fans despise Utley. When he appeared last month on WFAN's "Boomer & Gio" show in New York, an angry woman called in to berate him on behalf of Mets fans everywhere. Utley thanked her.

During his broadcast debut in Los Angeles, Utley was asked about his feelings toward his former NL East rival. He clarified for the record that he does, in fact, hate the New York Mets.

Do you hate the New York Mets?

Utley also was asked a few other questions about his playing days, including who he considers his favorite teammate over his 16-year career. The nod goes to Pat Burrell.

More from that interview: Chase Utley seems to love Pat Burrell as much as he hates the Mets. pic.twitter.com/6j5BZuO9jR

Most professional athletes would stay away from nasty responses to leading questions. It's refreshing to hear Utley proudly announce his hatred for the Mets. If that's what motivated him to destroy them so often, there's nothing wrong with that.