As previously noted by this author, "Star Wars" nights are a regular occurrence at games for both major and minor league teams in several American sports nowadays, especially since the triumphant resurgence of the science fiction film franchise over the past couple years.

And those nights usually result in some pretty sweet (or awful) "Star Wars" jerseys. The Delaware 87ers, the Sixers' D-League affiliate, are the latest to enter the fray, as the team will wear R2-D2-inspired jerseys for their matchup against the Erie BayHawks Friday night.

Per a team press release:

Sevens players will wear special R2-D2 jerseys that will be auctioned off to fans to benefit Nemours/Alfred I. duPont Hospital for Children. Twenty percent of tickets purchased using promo code NEMOURS here bit.ly/2eouF8J will also be donated to Nemours.

Fans can count on an out-of-this-world night! Upon entry, the first 1,500 people will receive a commemorative Darth Vader poster. Star Wars characters from local performance groups Garrison Carida (501st Legion) and Ghost Base (Rebel Legion) will fill the arena, and Jedi Master Yoda will serve as the public address announcer. All fans are encouraged to dress up as Star Wars characters and participate in a costume parade for the chance to win prizes. 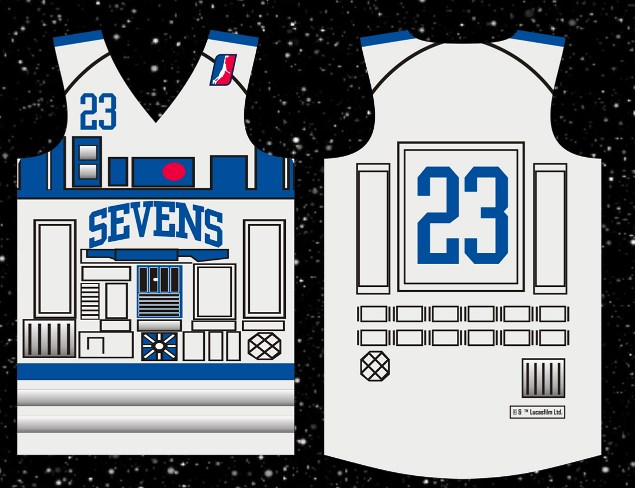 The Delaware 87ers are wearing these R2-D2 jerseys for “Star Wars” night.

The 87ers play at the Bob Carpenter Center in Newark, Delaware, and tickets for the 7 p.m. game are still on sale for all you "Star Wars"/basketball nerds without Friday night plans (hard to imagine you don’t already, I know).