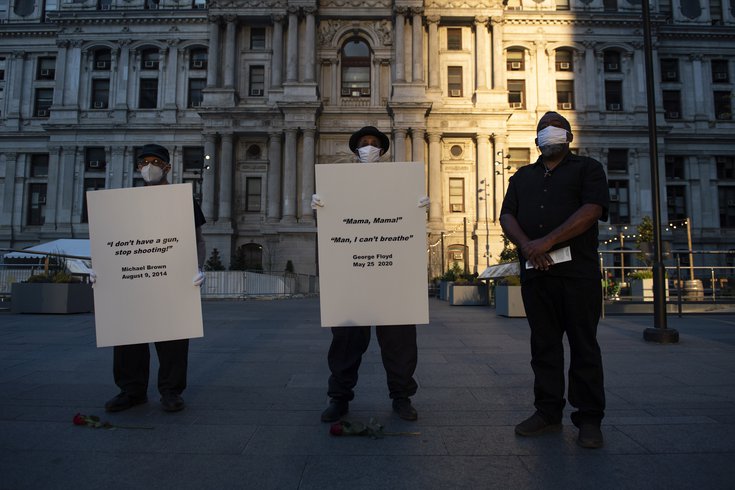 Cheers reverberated throughout Philadelphia on Tuesday evening after the jury returned its verdict in the highly publicized trial of Derek Chauvin, finding the former Minneapolis police officer guilty on all counts.

Chauvin was charged with two counts of murder and second-degree manslaughter in the May 2020 killing of George Floyd. Chauvin knelt on Floyd's neck for more than nine minutes while remanding him into police custody.

Floyd's death sparked a wave of protests across the country against systemic racism and police brutality.

Following the verdict, members of the community, elected officials and local organizations responded to the news with messages of relief and calls for more work to be done.

Philadelphia City Council issued a joint statement calling for a new vision of public safety that invests in communities and services that prevent violence.

Today's verdicts can't deliver justice, but they're an important measure of accountability for law enforcement institutions whose power has long gone unchecked.

To achieve justice we must address the root cause of police violence: systemic racism.


Guilty on all counts #DerekChauvinVerdict

This is step towards justice and healing for #GeorgeFloyd’s family and community.

We sat in silence and waited and prayed.


District Attorney Larry Krasner pushed for "transformational changes to policing" and "increased accountability for officers who break the law."

This afternoon, a Hennepin County jury entered the only right and just verdict in this case. We hope that Mr. Floyd’s family and friends can find some modicum of peace today, even though we know that there is no way to ever fully restore their loss.... pic.twitter.com/H7XGOuxLuF


Rep. Dwight Evans said more work needs to be done, highlighting a proposed law named after Floyd that would ban chokeholds and limit certain legal protections for officers awaiting a vote in the U.S. Senate.

I hope the Floyd family finds some solace in the murder conviction of Derek Chauvin. Still, the work is not finished. The House passed the George Floyd #JusticeInPolicing Act months ago. The Senate must now act to create systematic change!


It has sadly been a rare occurrence in American history for an abusive and criminal police officer to be held accountable for murdering a Black person, and I hope today’s verdict sends an important message that no one is above the law.


Mayor Jim Kenney issued a statement Tuesday that said the verdict brings us "one step closer to justice."

"It’s time to implement real and sustainable change to end racism, intolerance and police brutality against Black and Brown Americans," Kenney said. "We must do this for George Floyd — and for all the generations of Americans who have been victimized because of the color of their skin."

Police Commissioner Danielle Outlaw said over the past few months, the Philadelphia Police Department has implemented changes and reforms to improve police responses when using force and build community trust.

These measure include the immediate reporting of any use of force over police radio, banning certain holds that restrict airflow or breathing and the Active Bystandership for Law Enforcement program.

"Watching the actions (and inactions) of officers at the scene of [Floyd's] death has been enraging and devastating," she said. "As a mother, the loss of a child, no matter their age, is a hurt that I hope I never experience. My heart goes out to George Floyd’s family in their time of grief. This verdict will not bring their son back, but I hope they will find some comfort knowing that justice was indeed served."

Chauvin's sentencing will be held in the coming months. He was taken into the custody of Hennepin County Sheriffs.

Organizations from the Sixers to the Pennsylvania Bar Association issued statements on the verdict as well.


In response to the guilty verdict in the Derek Chauvin murder trial, President Dr. Guy Generals says it is a small step in the right direction. “While justice may have been served in this particular case, we know the pursuit of justice and equality continues." Full statement ⬇️ pic.twitter.com/nz1sYzh5AR