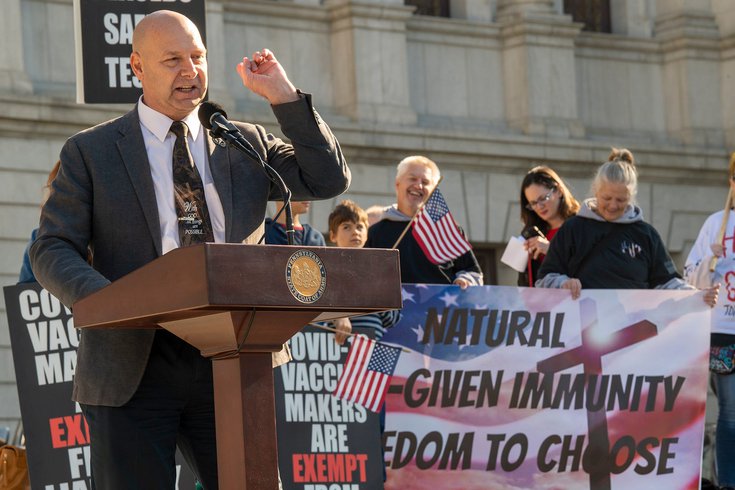 Sen. Doug Mastriano, a candidate in Pennsylvania’s Republican primary for governor, is facing criticism over a 2002 academic paper he wrote. In it, he describes the U.S. military’s 'hypersensitivity' to civilian deaths as an 'enormous weakness.' Above, Mastriano speaks during rally at the Pennsylvania Capitol in November 2021.

A leading candidate in Pennsylvania's Republican primary race for governor wrote in a 2002 academic paper that the U.S. should "not hesitate" to strike at locals if a military regime is nearby, describing the U.S. military's "hypersensitivity" to civilian deaths as an "enormous weakness."

The remarks appeared in a 2002 academic paper written by state Sen. Doug Mastriano, R-Franklin, who is seeking the state's Republican nomination for governor. Mastriano is a retired Army colonel who has frequently referenced his military experience in Europe and the Middle East during his time in the state Senate.

In the 2002 thesis, titled "Nebuchadnezzar's Sphinx," Mastriano examined how the U.S. can learn from Iraq's military strategy against Kuwait in the early 1990s, and how the country's conflict with Saddam Hussein during that time can "equip the U.S. with the capacity to anticipate and thwart the various strategies that Baghdad may use in future conflict."

"This U.S. hypersensitivity about civilian casualties is an enormous weakness that Saddam exploited during Desert Storm and will do so again in the next conflict," Mastriano wrote on page 55 of the document. "Saddam's biggest strength in fighting the U.S. is its aversion to killing civilians. This provides Saddam with sanctuary for his regime's essential infrastructure. To protect the regime, important functions will be located among the masses, near schools and even in mosques," he wrote. "The U.S. needs to understand this and not hesitate to target locations that Saddam is using even if there will be unintended consequences and casualties. This is not to say that the U.S. should intentionally kill innocents. The goal is to keep that at a minimum, but not to hesitate to strike at locals where the regime is hiding."

Mastriano added that a "safe and predictable" air campaign would have proven unsuccessful in later conflicts with Hussein. "He knows how we use air power and the limitations we impose on ourselves. These he uses to his advantage and to our demise," he wrote.

In "Nebuchadnezzar's Sphinx," Mastriano explicitly states that he was not advocating for the intentional killing of civilians.

Mastriano's gubernatorial campaign did not respond to multiple requests for comment for this story. However, experts in military ethics and international humanitarian law say that if the practices described by Mastriano – namely, the idea of conducting strikes on locations while knowing that civilians are present – were carried out by the U.S. military, they could violate international law.

But the issue is far from black and white, with experts noting that the legality of Mastriano's suggestions would depend on their impact on the battlefield.

"What he is proposing is that if the enemy is hiding in a church, or a school, or in a hospital, that we ignore the laws of war and strike that hospital, or that church, or that school. That would be a war crime; that would be deliberately striking at civilian infrastructure in places that are understood to be off limits under the Geneva Conventions," said Claire Finkelstein, the founder and academic director of the Center for Ethics and the Rule of Law at the University of Pennsylvania.

But international humanitarian law is nuanced and, in this case, depends on a lot of hypotheticals, including how severe a potential military operation would be, experts said.

That first protocol prohibits attacks that "may be expected to cause incidental loss of civilian life, injury to civilians, damage to civilian objects, or a combination thereof, which would be excessive in relation to the concrete and direct military advantage anticipated."

These international protections pertaining to civilians can be murky and complex, however.

Alexander Downes, a professor of political science and international affairs at George Washington university, said the legality of what Mastriano proposed in his thesis – if carried out in an actual conflict – depends on two principles in international humanitarian law, known as distinction and proportionality.

Distinction, he said, is the more clear-cut of the two principles. "It's forbidden to attack civilians, civilian populations or civilian objects intentionally. You're supposed to make a clear, bright, red line between the civilian population and its objects, support and so forth, and military targets," Downes told City & State. "You're perfectly permitted to attack military targets – but not civilians. So that's distinction."

Proportionality, on the other hand, is the trickier of the two. Downes said that in the process of attacking military targets, the proportionality principle dictates that "you have to take precautions and care not to do so much damage to the surrounding civilian population that it outweighs the military advantage gained by striking whatever military target you're trying to destroy."

"Of course, those are really hard to measure," Downes added.

As for how the principles relate to Mastriano's thesis, Downes stressed that Hussein "co-located" military forces at or nearby civilian facilities during the Gulf War, a move that was made in violation of the Geneva Conventions. The first protocol of the Geneva Conventions forbids civilian populations from being used to "render certain points or areas immune from military operations" and "shield military objectives from attacks."

"You're not allowed to co-locate military functions – like put your headquarters in a mosque or, or a school or a hospital – because that's putting the civilian population in danger," Downes said. "But – and the big but – is that doesn't relieve the attacker of the responsibility to still try to mitigate civilian harm, right? So it doesn't necessarily place whatever that thing is off limits, but if you just bomb it without any regard for thinking about civilian casualties, that could violate proportionality."

Andrew Bell, a professor of international studies at Indiana University, served in the U.S. Air Force as an active duty and reserve officer, with stints in Afghanistan and Iraq. While in Afghanistan, Bell worked with the Army Special Forces on their targeting mission against the Taliban's network.

Bell told City & State that determining whether a military strike violates the proportionality principle is difficult to distinguish due to how subjective it is.

"It's a very subjective standard and so there's debate as to what to what degree are you violating that with your military operation," Bell said, noting that Mastriano's thesis "walks the line" but "doesn't really explicitly state that you should target civilians."

Experts also differed on whether or not the U.S. has a "hypersensitivity" toward civilian deaths. Finkelstein disagreed with Mastriano's assessment. "I would say it's the reverse – that the U.S. has been insufficiently sensitive to the risk of civilian casualties and its operations." Bell, meanwhile, said the U.S. stance on civilian casualties has changed over time. "It kind of fluctuates, to be honest," he said. "We sort of see it … swinging between two ends of the pendulum or the spectrum."

Mastriano's academic research has faced criticism in the past. In 2021, a University of Oklahoma graduate student filed a complaint that accused Mastriano of using false citations, according to the Associated Press.

To date, Mastriano has been one of a few leading candidates in Pennsylvania's Republican primary race for governor, having risen to prominence in part due to his vocal opposition to Pennsylvania's COVID-19 mandates. He has faced increasing scrutiny in recent weeks, with a major conservative group looking to slow his campaign through mailers attacking his legislative record.

Mastriano was also subpoenaed by the U.S. House committee investigating the Jan. 6, 2021 attack on the U.S. Capitol over his apparent intention to try and appoint an alternate slate of presidential electors following the 2020 presidential election, though it's unclear if Mastriano has complied with the panel's request.

Recent polls from Franklin & Marshall College and The Trafalgar Group have Mastriano leading among the state's nine GOP candidates for governor, though a sizable number of voters said they were undecided in both polls. Another poll from The Hill and Emerson College showed former U.S. Rep. Lou Barletta with a one-point lead over Mastriano. Pennsylvania's primary races for governor and U.S. Senate will take place on Tuesday, May 17.