The former U.S. attorney had been courting an endorsement for months 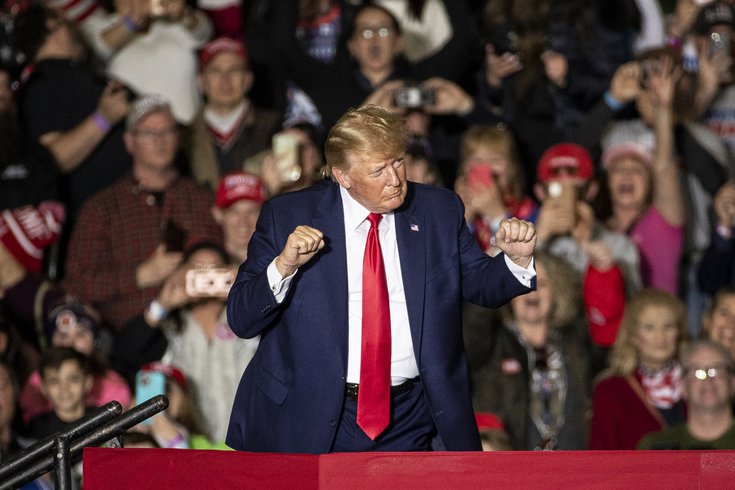 Former President Donald Trump has not yet endorsed a Republican candidate in the race for Pennsylvania governor, but on Tuesday he forcefully put to rest any notion that he'll back the campaign of former U.S. Attorney Bill McSwain.

Rehashing his baseless allegations of election fraud in 2020, Trump released a statement singling out McSwain's reticence on the issue of voter fraud in the days and weeks after President Joe Biden's victory.

"One person in Pennsylvania who I will not be endorsing is Bill McSwain for Governor," Trump said. "He was the U.S. Attorney who did absolutely nothing on the massive Election Fraud that took place in Philadelphia and throughout the commonwealth."

McSwain was appointed by Trump in 2017 to serve as the top prosecutor for the U.S. District Court for the Eastern District of Pennsylvania. McSwain had been angling at a Trump endorsement in the 2022 governor's race for months, even writing a letter to the former president last summer in which he claimed he was silenced by the orders of then-U.S. Attorney General Bill Barr.

In the letter last June, made public by Trump, McSwain claimed that his office had received various allegations of voter fraud and election irregularities. McSwain said that he wanted to go public with this information, but Barr told him not to put out any statements about voter fraud. Instead, McSwain said, Barr told him to pass along serious allegations to Pennsylvania Attorney General Josh Shapiro, a Trump critic who also is now running for governor and is the only Democrat on the primary ballot.

"As a Marine infantry officer, I was trained to follow the chain of command and to respect the orders of my superiors, even when I disagree with them," McSwain wrote to Trump.

The former president evidently was unmoved by this explanation, after months to reflect on it.

"He said Barr told him not to do anything (because Barr was afraid of being impeached by the Democrats), but he should have done his job anyway," Trump's statement on Tuesday continued. "Without free and fair Elections, we don’t have a Country. Do not vote for Bill McSwain, a coward, who let our Country down. He knew what was happening and let it go."

Trump's remarks are a major blow to McSwain, whose campaign had sought to leverage ties to the former president to stand out in a crowded field of GOP candidates. In one campaign ad, McSwain shared a photo with Trump, including text that clearly noted his appointment by Trump.

The McSwain campaign did not immediately respond to a request for comment on Tuesday afternoon.

Barr, whose relationship with Trump frayed in the waning months of the previous administration, denied last year that he ever ordered McSwain not to make public statements about voter fraud.

“Any suggestion that McSwain was told to stand down from investigating allegations of election fraud is false. It’s just false,” Barr told the Washington Post. The former attorney general further claimed that when he contacted McSwain about the letter, McSwain told him that his portrayal of events was technically correct and that McSwain couldn't "have Trump attacking me" if he wanted to run a successful campaign.

Separately, Barr also told the Philadelphia Inquirer that McSwain had wanted to "flap his gums" about election fraud without actually investigating specific allegations.

Barr broke away from Trump's widely debunked 2020 election fraud claims in December 2020, discrediting the former president as he and his legal team prepared lawsuits in several states, including Pennsylvania. Those efforts ultimately were found to be without merit as courts around the country tossed Trump's legal challenges.

Trump's claim that Barr had feared impeachment by Democrats makes little sense, considering that Biden's victory meant Barr would be leaving office, anyway. Even in the event that Trump had remained president, Barr's relationship with Trump was too far gone for him to remain at the Department of Justice for a second term.

In his statement on Tuesday, Trump disparaged McSwain by referencing alleged findings of election fraud in Philadelphia by the conservative True the Vote organization. The same group's investigations into voter fraud had been deemed unfit to be incorporated into the strategy Trump's legal team pursued, unsuccessfully, in the weeks after the 2020 election.

As U.S. Attorney, McSwain prosecuted a Philadelphia judge of elections and a former Democratic political operative who bribed the judge to stuff ballot boxes during past Philadelphia primaries for local contests. McSwain also has railed against progressive Philadelphia District Attorney Larry Krasner, promoting tough-on-crime strategies and a rollback of Philadelphia's sanctuary city status for undocumented immigrants.

In the race for Pennsylvania's hotly contested U.S. Senate seat, Trump last week endorsed Mehmet Oz, who has been edged out in polls by David McCormick, a businessman and former under secretary of the U.S. Treasury for International Affairs.