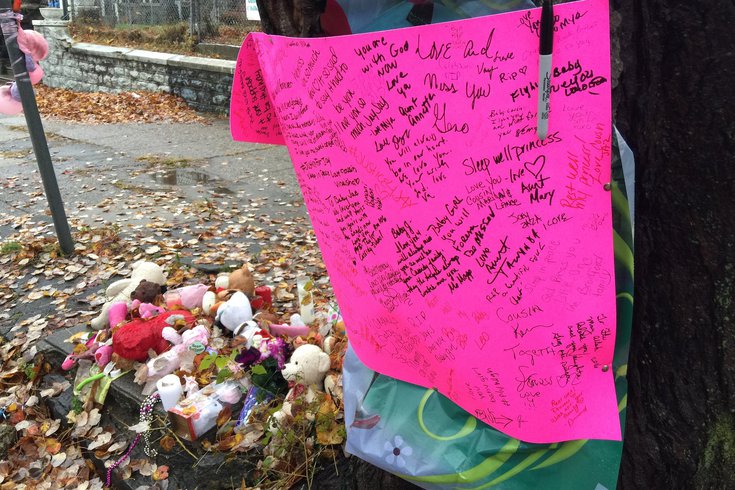 Jayanna Powell was killed by a hit-and-run driver while walking home from school in November 2016. A bill to establish a hit-and-run alert system in her memory passed out of a state Senate committee last week.

A proposed alert system, named "Jay's Alerts," would directly provide repair shops with the descriptions of vehicles involved in hit and run crashes. It's an effort to prevent drivers who flee these crashes from evading detection.

Legislation to implement the system advanced out of a state Senate committee last week.

The system is named after Jayanna Powell, an 8-year-old who was fatally struck by a car on the corner of 63rd Street and Lansdowne Avenue in West Philadelphia while walking home from Lewis C. Cassidy elementary school with her three siblings on Nov. 18, 2016.

The driver, Paul Woodlyn, drove to an auto repair shop in Chester County later that day. The owner of the repair shop saw a news report about a reward being offered for information leading to the driver's arrest, which helped police track him down.

During trial, Woodlyn told the jury that he did not initially see the children, who were crossing the street against a red light. He said he panicked and left the scene.

Woodlyn was found guilty of involuntary manslaughter and reckless endangerment, but acquitted of vehicular manslaughter in November 2017. He was sentenced to four and a half to nine years in state prison, followed by nine years of probation.

Under the proposed law, the alert system would send auto repair shops a description that includes the make, model, year and color of any vehicle involved in a hit-and-run, as well as the license plate number. Any unique identifying characteristics would be included too.

Each repair shop would be required to register with PennDOT. If a shop fails to report a vehicle matching the description, the operator could face a third-degree misdemeanor charge.

"Repair shops will be put on notice that if someone comes within a certain period with damages to their car that were alerted by state police. ... That information would be advanced to the state police, and they would investigate those cars," State Sen. Anthony Williams said during a Senate Law and Justice Committee hearing held last week.

Pennsylvania State Police and PennDOT told PennLive that they appreciate the sentiment behind the bill.

"While we will continue to review the legislation, there are initial concerns that inserting a new alert in addition to the Amber Alert and Missing and Endangered Person Alert systems (which Pennsylvania is nationally recognized for implementing) could impact their effectiveness," the agencies said.

About 1,500 Americans die from hit-and-run crashes each year – approximately 60% of them are pedestrians, according to AAA. Fleeing the scene of a crash where someone has suffered serious bodily harm is a felony in Pennsylvania.

Republican Sen. Mike Regan signaled support for the legislation, noting he believes it provides necessary assistance to police investigating hit-and-runs. The committee approved the bill with an 11-0 vote, and it will advance to a further vote in the state Senate.