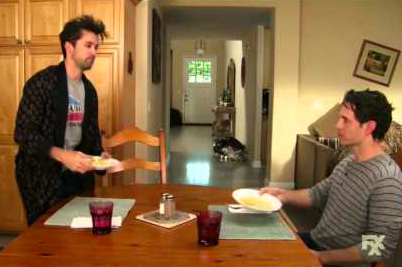 Mac and Dennis couldn't survive in the Philly suburbs in season 11, episode 5 of "It's Always Sunny in Philadelphia."

When life gives you mac n' cheese every day, you throw a fit and toss it across the room. That's how it goes for Dennis Reynolds.

In a classic "It's Always Sunny in Philadelphia," Mac and Dennis move to the suburbs to enjoy a quiet and peaceful existence. The rest of the gang bets they won't last a month there.

Everything goes wrong, from weird noises at night to overly friendly neighbors and constant bickering at home. Mac, who spends his time as a homemaker, commits to cooking his "famous mac n' cheese" daily for Dennis, who commutes to Philadelphia to work at the bar. Dennis gets sick of it and later discovers it's just store-bought mac n' cheese, anyway.

Here's what Dennis does one afternoon when Mac serves him.

This scene is now the template for a hilarious image labeling meme currently making the rounds on Reddit. The concept is that Mac represents wisdom and generosity, while Dennis represents ungratefulness and self-destruction. Alternatively, Mac is putting lipstick on a pig and Dennis isn't having any of it.

Here are the best of the bunch, so far.

My portfolio isn’t great, but it isn’t bad. from r/MemeEconomy

Not too relevant but don’t question me from r/dankmemes

Bought in early! Invest now before it's too late. from r/MemeEconomy

I made this in snapchat haha from r/dankmemes

I think this format has some potential. What do you think? from r/MemeEconomy

They can never replace it from r/IASIP

It's only a matter of time before someone makes the plate of mac n' cheese "Season 13."