Chef Guillermo Pernot has been visiting Cuba for the past seven years, and now, he wants to show Philadelphians what it's like 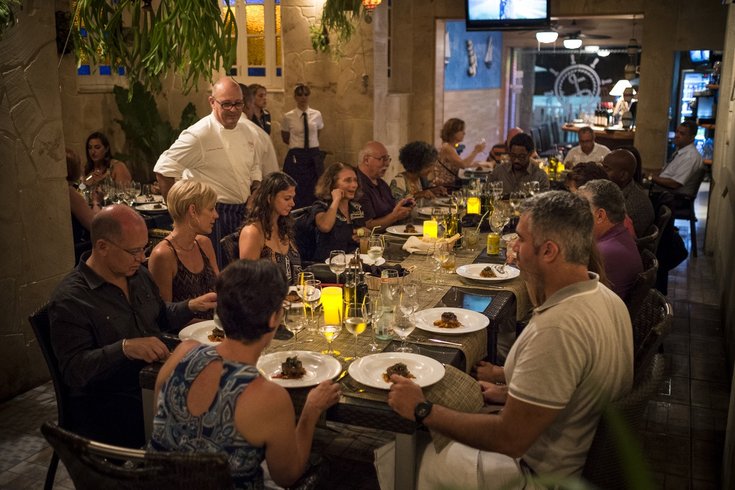 Chef Guillermo Pernot with a group of diners in Cuba.

Yeah, you read that right.

Award-winning chef Guillermo Pernot, of Philly's Cuba Libre Restaurant & Rum Bar, is apparently looking to take some of his most devoted eaters to Cuba for a circumnavigation cruise.

The chef will not only prepare two dinners on the 15-day cruise, but also act as a guide to the cruisers on culture, history, and all things food. The cruise includes stops in Key West, Fla. and cities in Cuba like Havana, Trinidad, Cienfuegos, and Santiago de Cuba.

But if you want to join in for the luxurious fun, you'll have to pay the price, of course. The trip comes in at nearly $6,000 per person.

Pernot has been to Cuba 15 times over the past seven years to put out a new cookbook, Cuba Cooks: Recipes and Secrets from Cuban Paladares and Their Chefs, which is no doubt the inspiration behind the trip.

“The intention for this cruise is to share the culinary insights and adventures in Cuba that I’ve experienced over the years, and distilled into my latest cookbook, with this exclusive group of travelers,” Pernot said in a statement.

“It's not easy for American travelers to see the real Cuba as most Americans don't have the opportunity to leave Havana."

"Travel and accommodations are much harder to organize as compared with other countries and most people end up eating at tourist’s traps. These lucky travelers will have the opportunity to eat at places that are truly serving great food where the chefs have a passion for their craft," he added.