Dad catches foul ball with baby strapped to his chest 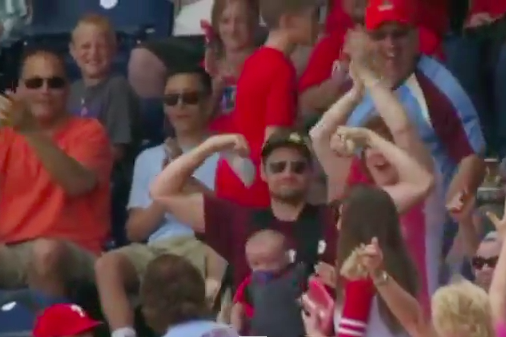 One father took the spotlight at Sunday's Mother's Day game at Citizens Bank Park between the Phillies and the Mets.

Mike Capko made a one-handed catch of a foul ball hit by a Mets player, all with his baby son Kolton strapped to his chest, CBSPhilly reports. Capko's wife Alyssa was next to him.

“There’s no way I wasn’t catching that ball,” Capko told Angelo Cataldi and the 94WIP Morning Show on Monday.

"It was unreal. I was just sitting there watching the game with the 29,000 other people. You don’t really have a reaction, you just kind of have instinct and my instinct was kind of shift to my right a little bit, stand-up, and catch the ball.”

See the catch that has gone viral below.